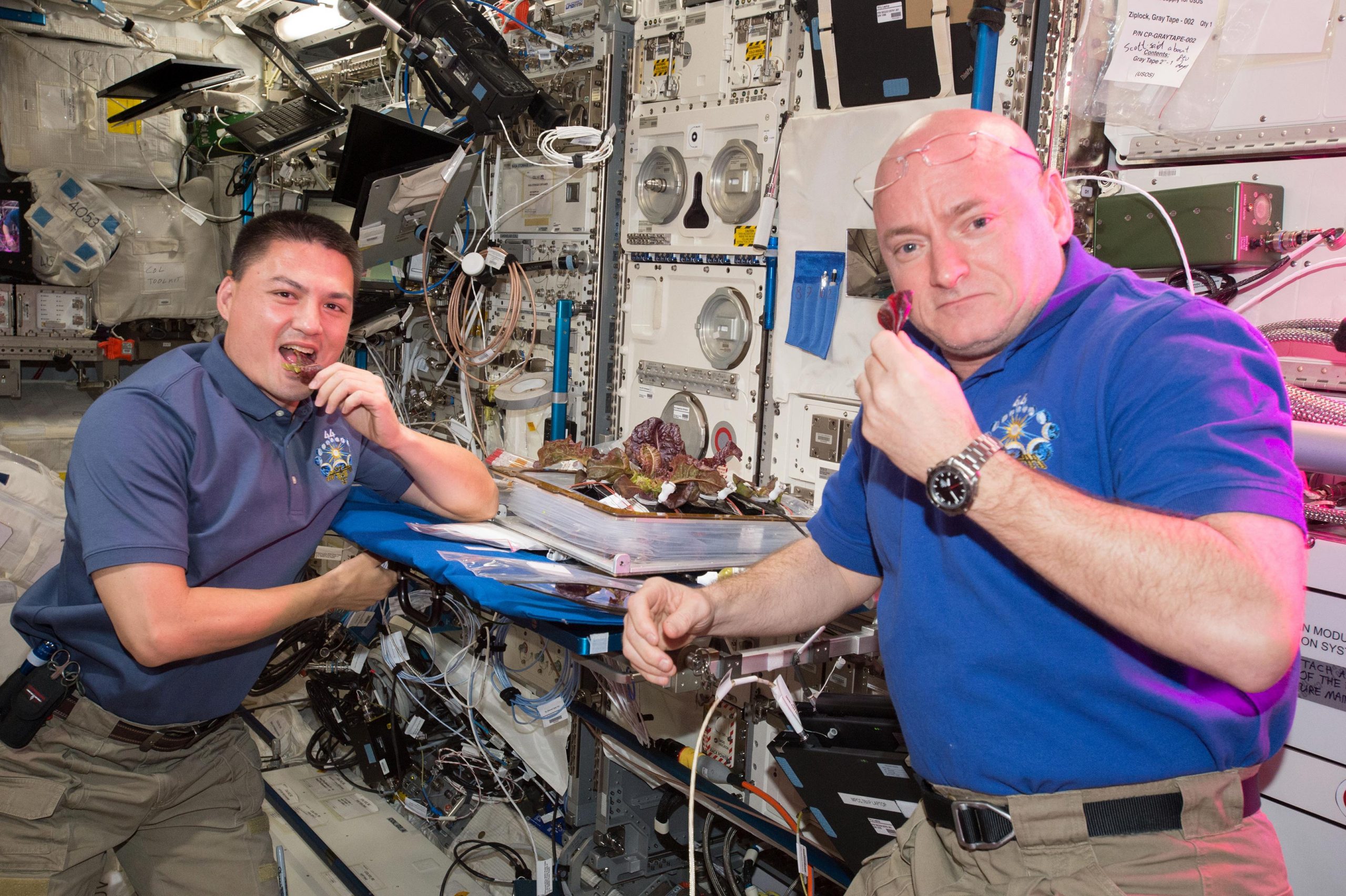 Experiments on the International Space Station are showing that lettuce can be grown successfully in space. The first variety tested, a red romaine lettuce called ‘Outredgeous’, grows well and astronauts found it quite tasty. It was chosen because of its fast and uniform germination and short harvest time … and its beauty, with attractive red leaves.

The first harvest was actually not eaten: it was frozen and sent back to NASA laboratories on Earth to make sure it was safe. It does have higher levels of microbes than earth-grown lettuce, but they were the same microbes found on Earth, and none was harmful to humans. Besides, that was expected, given the closed-air system on the space station which is also a habitat for astronauts.

It was also determined to be fully edible and now astronauts can have fresh vegetables to munch on with their meals as a change from their dehydrated, pre-packaged foods. The nutritional quality of the lettuce was excellent, even slightly better than for lettuce grown on Earth, containing slightly larger proportions of potassium, sodium, phosphorus, sulfur and zinc.

Plants grown in the microgravity of the Space Station start off at a disadvantage. On Earth, gravity causes roots to grow down into the soil (this is called gravitropism), while stems grow up, fighting gravity, due to negative gravitropism. With this lacking, it wasn’t originally clear how plants would react. However, there are backup systems. Roots also grow towards a source of humidity, so watering from below can replace gravitropism. And leaves and stems grow towards light (phototropism) and not just away from the pull of gravity. So, with moisture below and artificial light from LED lights above, the plants’ growth can be close to normal.

The red romaine lettuce was ready to harvest in 33 days, much as it would have been on Earth, and looked very much like the same variety grown in a parallel system at NASA.

Watering is space is rather special. You can’t just pour water onto the root system with a watering can: water thus treated forms a bubble and floats off in any direction, then coats the first surface it encounters, quite possibly the astronaut rather than the planting bed. Instead, scientists developed a special root mat that can be placed under the substrate and filled with water, allowing moisture to slowly move towards the roots by capillarity action (wicking).

The growing system is called Veggie (Vegetable Production System). Seeds are pre-sown on earth, glued with biodegradable guar gum to a plant pillow filled with a growing substrate called calcined clay (think kitty litter) and a supply of fertilizer. The pillow is placed on the water-filled root mat which wicks water upward while a bank of LED lights hangs above, encouraging leaves to grow in the opposite direction. The entire growing space is enclosed in an accordionlike plastic shell. There is also a fan to keep air circulating and to pull fresh air in.  The entire Veggie system is about the size of a two-drawer filing cabinet.

You can read more about the system used here: Veggie.

Tests of other vegetables are underway, including other types of lettuces, kale, pak choi, Chinese cabbage, mizuna mustard and fruiting vegetables like dwarf tomatoes and hot peppers. The latter will require astronauts to do a little hand pollination!

Note that all these vegetables are for eating raw: there is presently no way of cooking the on the International Space Station.

Besides supplementing the diet of current Space Station astronauts, growing vegetables will be vital to establishing a sustained human presence on the moon, which NASA schedules for 2028. Even more important, during a mission to Mars, which can take 2 or 3 years, the vitamins and quality of packaged food would degrade over time. Supplementing this diet with fresh, edible crops will provide necessary nutrients and also enhance dietary variety. Plus, there is plenty of evidence to support the belief that growing, harvesting and eating plants offers astronauts considerable psychological benefits.

So, readers, your gardening experience might just make you an ideal candidate for the first Mars mission! Contact NASA to find out how to apply!