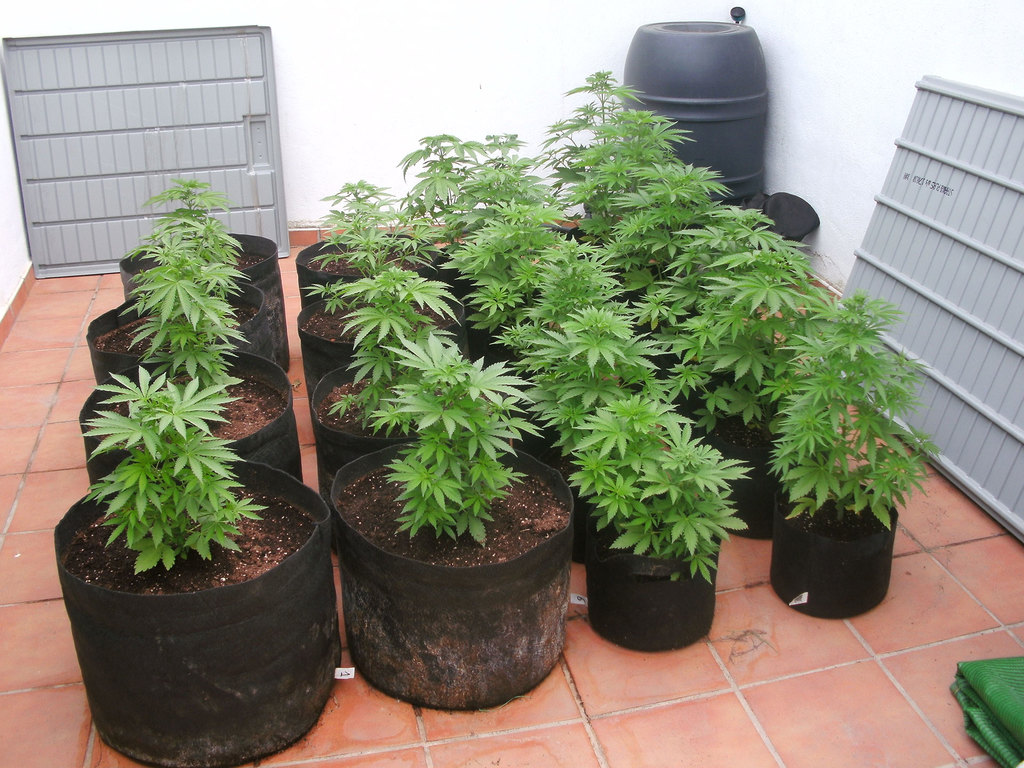 Fiber pots can become dirty or stained over time. (And yes, the plants shown are marijuana, which can now be legally grown in many areas.) Photo: learngrowingmarijuana.com

Over the last few years, pots made of fiber, usually geotextile, have become very popular for growing vegetables and also marijuana. The best-known ones are made by Smart Pot, to the point where “smart pot” is often used as a generic name, but other brands you may see include FiberGrow, GeoPot, Root Farm, Root Pouch and Dirt Pot.

The main advantage fiber pots compared to plastic pots is that they allow greater aeration to the roots and result in root pruning: fine roots near the edges of the pots are trimmed by exposure to the air, leading to improved branching, rather than roots circling inefficiently around the inside of the pot as happens in plastic pots. They also dry out more quickly, preventing overwatering. A further if somewhat minor advantage is that, if you empty them, they take up little space in storage, as you can fold them flat. However, since many gardeners never empty them, that’s rather a mute point.

Many gardeners really like them and see improved yields.

One question gardeners have, though, is how to clean them before reusing them (and they can last 7 to 10 years), so let’s look into that.

Do You Need to Clean Them?

Actually, you don’t … at least, not in most cases and certainly not every year. Yes, dirt and stains can appear on the outside, but, people, we’re working with plants growing in soil … in other words, dirt. A bit of dirt or discoloration on the outside of a pot doesn’t really mean much. And for most of us, the appearance of the pot is of no importance as long as the plants you grow in them produce well. If a dirty exterior really bothers you, just use a soft-bristled scrub brush to lightly scrub the outside of the pot each spring … or just slip into a cache-pot.

Do note that you don’t need to empty fiber pots at the end of the growing season. You can leave them full of soil all winter, storing them outdoors or bringing them into a garage or potting shed, then reuse them with the same “old soil” the next season, probably adding a bit more growing mix or compost each spring, as soil does decompose. You can do this for years, until … something goes wrong.

Things That Can Go Wrong

The appearance of white stains on the outside of the pot, most likely in where water is hard, can mean the soil is becoming contaminated with mineral salts that will negatively affect plant growth.

The buildup of algae or moss on the outside usually means either you’ve been overwatering or the soil inside has become so compacted that there is little air circulation, but, in either case, that means the pots are no longer “breathing” as they should.

And then there are soil-borne plant diseases like fusarium, verticillium, sclerotinia and various root rots, even nematodes in mild climates (nematodes aren’t really a disease, but create disease-like symptoms). These can build up over time and considerably reduce yields. If you’ve been growing tomatoes over and over again in the same soil, for example, thus not carrying out crop rotation like you really should, this can become a problem.

So, at least every once every few years, you do have to dump out the old soil (you can put it in the compost bin or use it in the garden) and thoroughly clean your fiber pots.

How to Clean a Fiber Pot

Here’s how to clean a fiber pot, step by step.

Now, that wasn’t difficult, was it?

5 comments on “How to Clean Smart Pots”