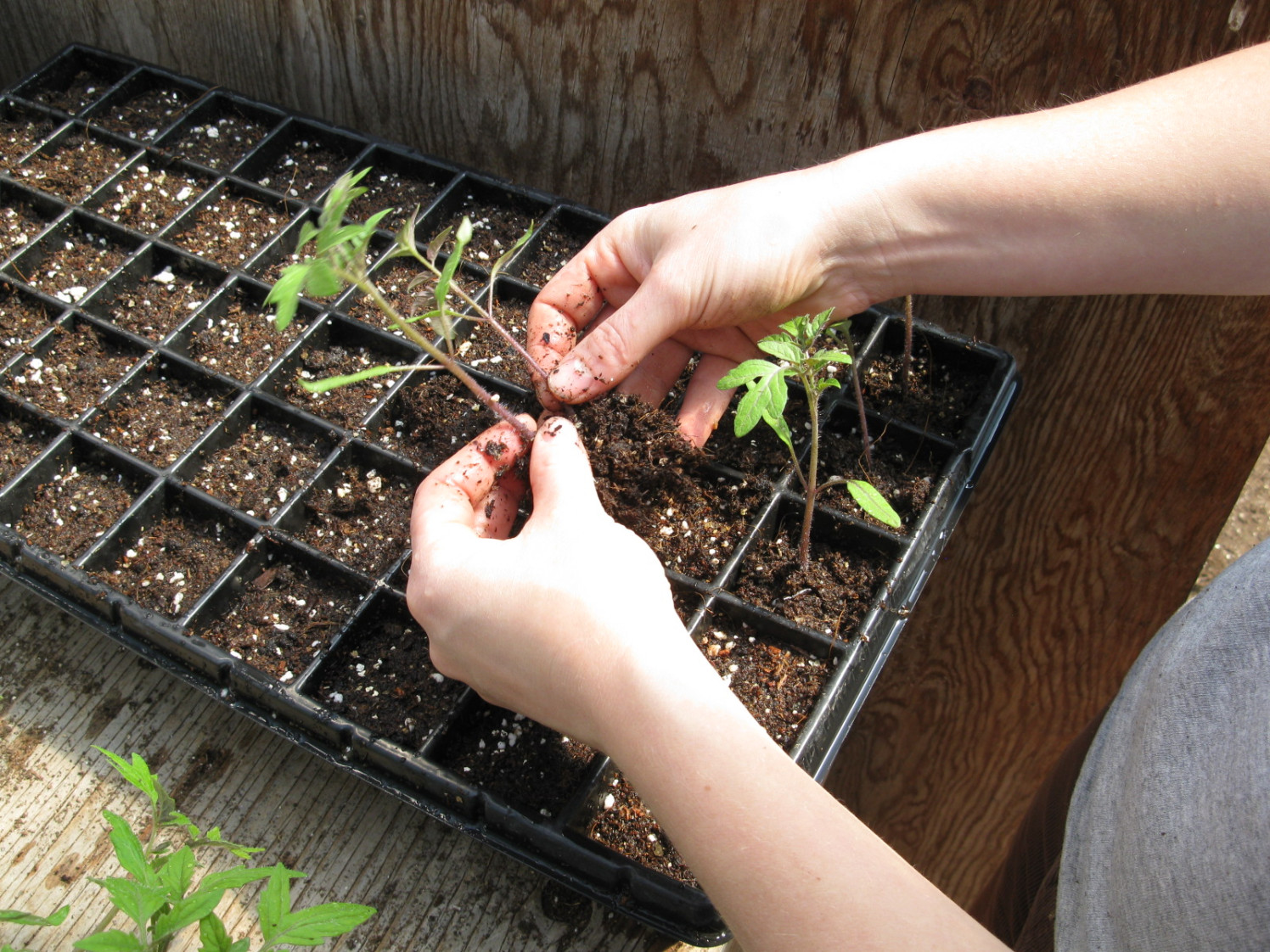 Popular belief to the contrary, potting seedlings up is not always necessary. Photo: goingtoseed.wordpress.com

Question: Do you have to transplant seedlings started indoors into larger pots or can you keep them in their original pot until it’s time to transplant them directly into the ground?

Answer: Moving a seedling from a small pot or a tray into a larger one is called potting up and it used to be considered a necessary step in starting seedlings indoors. Certainly, my father believed in it and I can remember us sitting around his workbench and carefully transplanting dozens of little seedlings from trays into individual pots. It was believed at that time (that would have been about 50 years ago) that potting up stimulated better root growth and gave plants greater vigor.

Years later, I began to test out this idea myself. I’ve always been a lazy kind of guy and planting seedlings into larger pots before transplanting them into the garden seemed like a doubtful extra step to me. So, I sowed some seeds into individual pots right away and others in trays like my dad did, moving them into the same size individual pots when the tray filled in. And guess what? The plants planted directly into the right-sized pots did at least well as the up-potted ones and generally quite a bit better, producing larger plants with stronger stems.

Later, when the Internet came out and I was able to look at the results of actual scientific experiments, this confirmed I had been discovering. Transplanting inevitably slows the progress of young seedlings, most likely because it damages their roots. In general, the plants eventually recover from the transplanting and go on to produce normally, but sometimes the shock of this first transplanting reduces the productivity of the plant throughout the entire summer!

I now try to sow my seedlings directly into a large enough pot to hold them comfortably until it’s time to plant them out. I sow 3 seeds per pot, then, if they all come up, thin to one plant per pot. Perfect! At least, that’s what I do unless planting-out time is delayed and I can see the seeds becoming rootbound* (never a good thing), in which case I confess to reluctantly potting up a few seedlings.

*You can tell a seedling is becoming rootbound when it dries out almost overnight and there are roots growing out of the drainage hole at the bottom of the pot.

After all, slowing the development of a young plant by keeping it in a pot that is too tight can seriously affect the results it will give once planted outdoors. Ideally, you should ensure that your plants keep growing smoothly and without stress until you can get them into the garden.

Small pots of 5 cm (2 in) in diameter or less are fine for plants that are naturally small or will only be growing indoors for a short time, such as lettuces, leeks and sweet alyssum, but 7.6 cm (3 in) pots may be necessary for tomatoes and peppers, even 10 cm (4 in) pots if you prefer to sow them early so the seedlings are larger at planting-out time. For some really large seedlings, such as castor beans, an initial pot size of 15 cm (6 in) may be necessary.

Do note, though, that not everyone agrees with me. You’ll see plenty of websites still offering the old information and insisting the potting up is essential. I suspect none of them have ever tried doing things differently.

So, in my opinion, you only need transplant seedlings started indoors into larger pots if you have grown them in a pot that’s too small. Or if too many seedlings are growing in a tray and you want to recuperate all of them. And who doesn’t make that mistake every now and then?

Of course, maybe you purposely started your seedlings in small pots to save space. This is only logical if more growing space will open up later. For example, maybe you start growing your seedlings in an area where space is very limited, such as on a window sill or under a grow lamp, but have a greenhouse heated only by the sun that you can move them to when temperatures warm up further. In this case, the extra effort of transplanting your seedlings from tiny pots to bigger ones may well be worth it.

So, pot up if you have good reason to, but it’s an extra step a good laidback gardener would try to avoid.

1 comment on “Do you have to transplant seedlings indoors?”