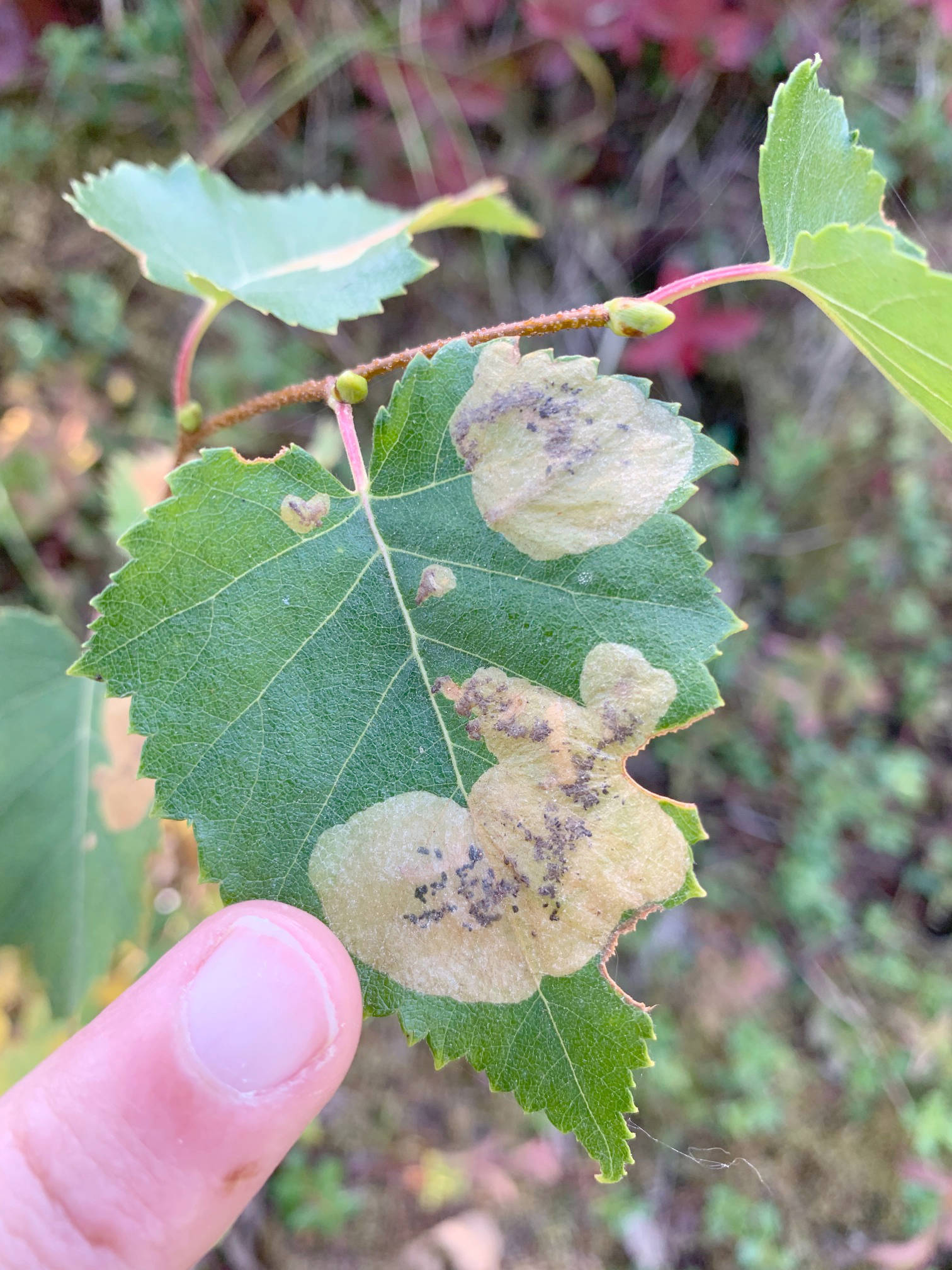 Question: My birch tree is being attacked by tiny caterpillars that live inside the leaf. What can I to do to prevent them?

Answer: The larvae you see are leafminers. There are several species that affect birches, the most common of which are the birch leafminer (Fenusa pusilla) and the amber-marked birch leafminer (Profenusa thomsoni), both of European origin, but now well established in North America as pests.

They’re not real caterpillars (which are the larvae of moths and butterflies), but rather the young of sawflies, very small, inconspicuous and rarely noticed black flylike insects. But they’re not really flies either, but rather hymenoptera, four-winged insects, therefore closer relatives of bees and ants than to flies which, being diptera, have only two wings.

Although their timing varies, the different leafminer species follow the same pattern.

The adult lays eggs under or inside the leaf and the larvae penetrate it, feeding on tissue from the inside of the leaf. All the adults are female, as the birch leafminers are parthenogenic (reproduce without fecundation).

At first, the damage is barely noticeable, at least from a distance, as the leaf remains green, but up close you can see small pale green or gray patches. If you hold the leaf up in front of a light at this point, you can see the larva, like a small white or translucent caterpillar, inside the leaf along with numerous black spots (its excrements). As it feeds, the patches grow in size.

Later, after the larva has left the leaf, the patches turn brown and then become much more visible. There may have more than one larva per leaf, in which case it may turn completely brown. In extreme cases, the entire tree seems to turn an unhealthy bronze color.

The larvae drop to the ground after a few weeks of feeding and become pupae. Most species have one generation per year, but the birch leafminer (F. pusilla) follows this with a second one in summer, although only the spring infestation is very visible. In mild climates, there is sometimes even a third generation in the fall, but so insignificant it usually goes unnoticed.

The final generation of the season overwinters in the ground in the form of pupae, becoming adult sawflies in the early to late spring, depending on the species, and starting a new generation.

The damage caused by birch leafminers is mainly cosmetic, as the infestation is rarely severe enough to harm the health of the tree. Only occasionally are more than 40% of the leaves affected and even then, the tree can usually tolerate this as long as it only happens once every few years. Severe and repeated infestations, although quite unusual, can eventually weaken and kill a tree.

You may have noticed that birch leafminers seem to be in decline. Certainly, you rarely see birches turn entirely brown as you would have 20 years ago. This seems largely due to predatory insects (tiny parasitic wasps, harmless to people), some of which are native and have learned to adapt to introduced leafminers, while others were introduced to various regions specifically to control them and are thriving. They prey on leafminers by laying their eggs inside in larvae and eating them alive (how charming!). As predatory wasp numbers increase, the severity of leafminer infestations has been decreasing.

Control of leafminers is difficult because the insect, living as it does inside the leaf, is naturally protected from pesticide sprays.

Still, there are neem-based organic systemic insecticides, such as TreeAzin, that can be injected into the tree and thus control the pest, but the price of this treatment, which can only be applied by a specialist, may seem excessive.

If the infestation is minor, you can pull off the affected leaves on the most visible side of the tree one by one, but that can be quite a task and is certainly not one for a laidback gardener! Besides, even damaged leaves carry out some photosynthesis, and removing too many leaves may do more harm to the tree than the leafminers themselves.

The most obvious prevention is to avoid planting susceptible species. Birch leafminers mainly attack white-barked birches, such as paper birch (Betula papyrifera), silver birch (B. pendula), gray birch (B. populifolia) and Japanese white birch (B. platyphylla). They rarely cause damage to other birches, including as river birch (B. nigra), yellow birch (B. alleghaniensis) and sweet birch (B. lenta).

There also is the option of spraying the tree with an insecticide when adults emerge from the soil in the spring and before they lay their eggs. To find out when to spray, place yellow sticky traps in the tree just before it buds out and when you see small black flies accumulating on the trap, spray thoroughly with an insecticide. Few chemical insecticides are still available to home gardeners—and who these days even wants to hear of neonics, accused of destroying local populations of beneficial insects!—, but trained garden care specialists and arborists do have a few they’re allowed to use.

Of course, even basic organic pesticides like insecticidal soap and neem will be effective if applied at just the right time.

And prevention also includes treating your birch well, as strong trees will be more insect resistant. That includes watering during periods of drought and before the ground freezes in the fall, annual fertilization, the occasional application of compost and the use of mulch over the tree’s root zone.

Mostly, though, just apply the 15-pace rule. Before treating, step back 15 paces: if you can’t see the problem at 15 paces, it’s not worth treating!