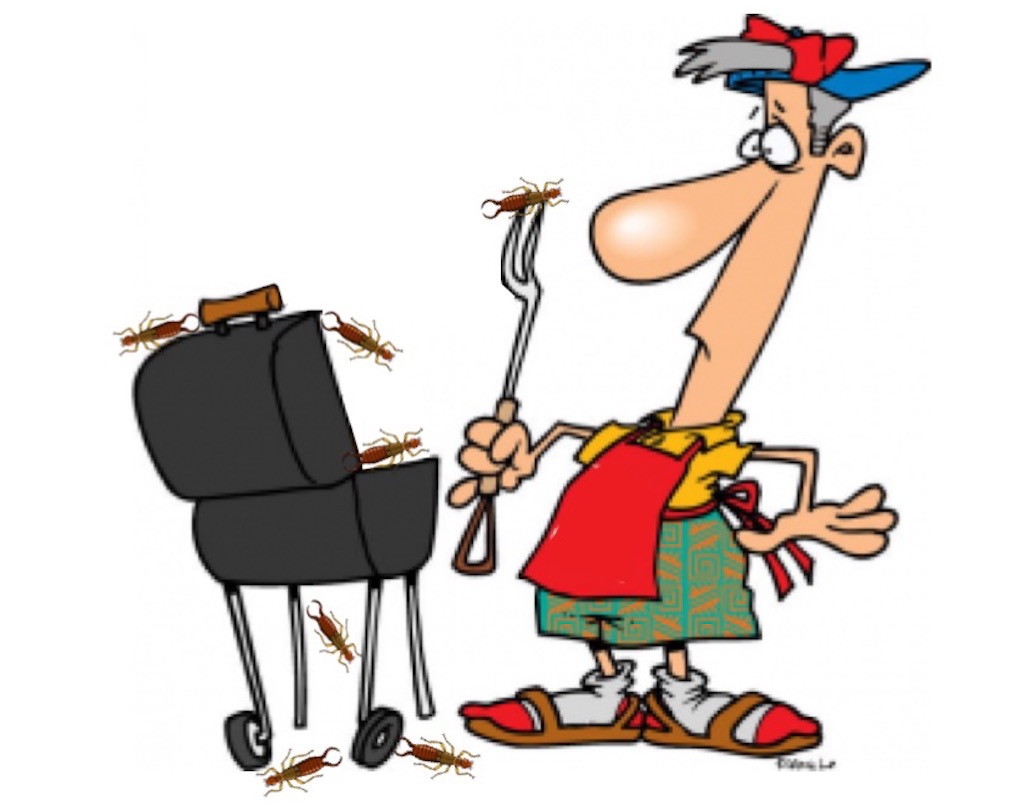 The weather is sunny and warm and you want to spend a maximum amount of time outdoors. It’s also precisely the right season to be cooking a maximum of meals on your barbecue grill. So, you go out, a plateful of juicy steaks (or mushroom steaks if you are a vegetarian) in your hand, then you open the grill … and a dozen earwigs drop out, scrambling to the right and left, desperately seeking a new hiding place. The whole situation is just revolting, yet it’s very common.

Let’s face it: earwigs (Forficula auricularia) love to hide in barbecues during the day. At night, they gallivant about, feeding mostly on detritus and garden pests like slugs and aphids, although they will attack some plants when their numbers build up too much (you can learn more about the good and bad sides of earwigs here). Then, as morning dawns, they look for a nice dark place where they can spend the day. Like a barbecue. Also, they’re also attracted to and feed on the fat and oil and bits of food that build up there. So … a shelter combined a well-stocked pantry? A barbecue is practically heaven on earth for earwigs!

Do note that earwigs are not harmful to humans (the idea that they can take up residence in our ears is a long-standing myth) nor are they poisonous and if they fall into your barbecue sauce while you’re grilling, they just add a little extra protein. However, out of sheer politeness, it’s best to remove the earwigs before serving.

So, you may or may not want earwigs in your garden, but you certainly don’t want them in your barbecue. So, what can you do to keep them away?

Here are a few tips.

Place the barbecue where it will sit in full sun all day. Earwigs prefer things dark, but cool and dark. However, a barbecue placed in full sun for most of the day gets very hot, even burning hot (try touching it with your bare hand), making such a location unattractive for earwigs. They may move in in the morning, but they then leave later in the day. Note that this technique will, of course, be less effective in cloudy or cool weather.

Don’t use a BBQ cover on your grill. Yes, a cover makes your barbecue less obtrusive and protects it from the elements, but also keeps it much cooler and gives earwigs even more places to hide. It’s a good way to increase the number of earwigs rather than reducing them.

Clean your grill regularly, removing all traces of grease and food debris. Scrape or rub the grill carefully and also remove ashes in the bottom that could provide shelter.

Empty the grease trap. Most barbecues have a small drip tray to catch grease and oils so they don’t drip onto the patio below. Remove and clean it after the fat has congealed.

Preheat the grill. To chase earwigs out of their hiding places, preheat the grill for a good 15 minutes before putting food on it. If they don’t get away in time, at least they’ll be well grilled before it’s time to start cooking.

Leave the lid open. This is actually the easiest solution. Since earwigs search for dark places to spend the day, a barbecue left open, exposing them to the full view of potential predators, simply doesn’t appeal to them. Some models of barbecue don’t have a lid … and it’s worth noting that the owners of those devices never have problems with earwigs!

2 comments on “Earwigs in Your Barbecue? Here’s What to Do!”