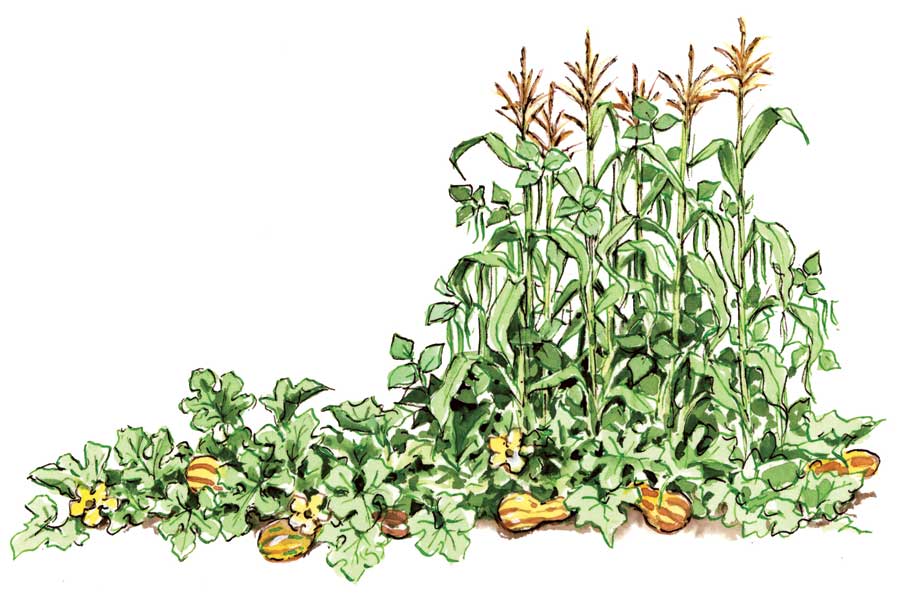 On this National Indigenous Peoples Day (Canada), why not take a look at the three sisters garden, the Native American method of growing vegetables that was once practiced throughout almost all of North America, from Panama to Canada?

Few modern gardeners think of this growing method for their home garden. But why not? It’s a tried and true gardening method that it has proven itself for millennia!

The method undoubtedly developed in Mesoamerica, where the three crops used were first domesticated, and is believed to be about 5,000 to 6,000 years old. About 2,500 BCE, it began spread northward, eventually reaching Southern Canada.

The Spanish found the Mayans growing according to this method, which they called milpa, in Mexico and elsewhere in Central America, yet the Saint Lawrence Iroquoians, over 3,000 miles (5,000 km) to the north, also used it. French explorer Jacques Cartier found fields planted this way when he landed in Stadacona (now Quebec City) in 1534.

The three sisters garden may well be the first example of companion planting. The idea is that three vegetables with complementary traits were grown together: corn or maize (Zea mays), beans (mostly Phaseolus vulgaris) and squash (mostly Cucurbita pepo).

The varieties used varied widely, partly depending on the climate: some varieties performed better under the long days of the northern summer while others did best in the 12-hour days of the tropics. Hundreds of varieties were grown. The Saint Lawrence Iroquoians, for example, were known to have cultivated fifteen varieties of corn, sixty varieties of beans and at least eight varieties of squash, including one we would all recognize today: the pumpkin.

Corn (originally flour corn was grown; sweet corn only having reached northern areas after the arrival of Europeans, in the 18th century) is a tall upright plant with sturdy stems. Those stems are used to support the twining stalks of beans. Thus, no staking is required for the latter.

The bean is a legume (member of the Fabaceae) and, like most of its relatives, lives in symbiosis with bacteria that are able to capture the nitrogen present in the air and make it available to plants. Thus, beans help to enrich the soil and thus to supply this very important to the corn and squash.

Finally, squash, a large, spreading, ground-hugging plant, covers the soil between the clumps of corn and beans, smothering weeds and acting like a kind of living mulch, creating a microclimate that better retains soil moisture. Also, its thorny stems may have been of some help in protecting the other crops from predators.

The three sisters were often also cooked together and again, the three are complementary, the bean adding to the mix two essential amino acids missing from corn and squash.

The Legend of the Three Sisters

According to an Iroquois legend, the three sisters form a divine trinity, having sprung from the tomb of Mother Earth who died giving birth to the twins Good and Evil. These plants made it possible to feed the twins and thus ensure the survival of the human race.

Your Own Three Sisters Garden

If you feel tempted to try your own Native American vegetable garden, go for it! All three vegetables need good warmth and should only be sown once both the air and the soil have warmed up, probably in May or June in most temperate Northern Hemisphere climates.

Also, why not implicate your children or grandchildren in the project or involve neighborhood kids? The three sisters legend is easy to understand and all the seeds involved are large and easy for small hands to manipulate.

Here’s How to Do It

You need a sunny location and well-drained soil. Or if your only garden space is on a terrace or balcony, try one in a container. (True enough, native peoples didn’t grow gardens in pots, but why not innovate?)

Now form a flat-topped mound of earth about 12 in (30 cm) high and 20 in (50 cm) in diameter. The Iroquoians used to bury leftover fish in the mound to nourish the plants, but fish are not as widely available as they once were. (I have mental images of a modern nuclear family dropping frozen fish sticks into the planting hole!) For your 21st century three sisters garden, simply add 3 or 4 handfuls of quality compost or organic fertilizer to the soil, according to the rate recommended on the package in the latter case. Blend well.

Sow 4 to 6 seeds of corn in the center of the mound, forming a circle. Sow them at a depth equal to three times the height of the seed. Water well.

When the corn reaches about 6 in (15 cm) in height (you have to give the corn a head start, otherwise its vigorous companions will quickly overwhelm it!), sow another 4 to 6 squash seeds and just as many bean seeds (make sure you use climbing beans, called runner beans) around the outside of the mound, always at a depth of three times the height of the seed. Just alternate the seeds: a squash seed, then a bean seed, then a squash seed, etc. Again, water well.

From there on, just carry out basic maintenance for the rest of the summer, watering and weeding as needed. And harvest the fruits of your labors when they are ripe.

The three sisters garden: a 5,000 thousand-year-old culture that still works just as well in the 21st century!

7 comments on “Grow Your Own Three Sisters Garden”