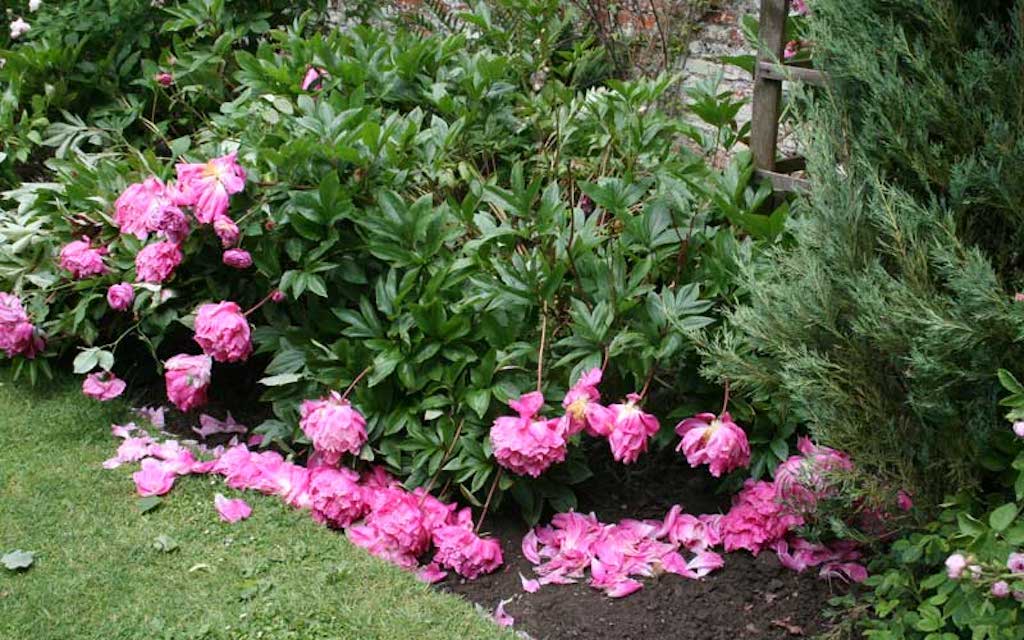 There is no need to put up with bad behavior from junk peonies. Photo: behnkes.com

I’ve never liked floppy peonies and never saw the point of growing them. I mean, the least you should be able to expect from a plant is that it stand up all on its own! Yet, generations of gardeners have been growing peonies that have no more tonus than a lettuce leaf. The slightest wind and down they come. And heaven forbid it should rain!

Of course, the peonies in question are all “old favorites”; ancient varieties carried forward from generation to generation to plague new gardeners. You’d think we’d have abandoned them ages ago, but no. Even as peony hybridizers have put in countless hours developing superb varieties with strong stems, we gardeners keep on ignoring them. There are maybe 150 or so floppy peonies and nearly 5,000 strong upright ones, yet what do we grow? One has to wonder if this growing of weak-stemmed plants is not a horticultural form of self-flagellation.

The floppy peony contingent was largely developed between the mid 1800s and early 1900s. Back then, peonies were grown mostly as cut flowers and long-stemmed varieties were considered highly desirable. Since cut flower operations of the time grew their flowers in greenhouses where there was no wind or rain, stem strength under garden conditions was simply not an issue.

By the 1900s, though, peonies were becoming popular garden plants as well and many cut flower growers began selling their surplus floppy peonies to home gardeners. Since staking was considered “the way to grow peonies,” there were few complaints. Well, at least, not from the average home gardener. People just expected to have to stake their plants.

But serious peony growers were aghast at the situation. Peony societies began sprouting up here and there (the American Peony Society, for example, was established in 1903), largely to promote the development of peonies “as a garden plant,” i.e. peonies that don’t flop. And this stimulated a great deal of interest in the hybridization of sturdy peonies.

But the newer, sturdier peonies cost more than the mass-produced floppy ones and made little headway on the market. Even today, the average peony sold in garden centers is a pre-20th century variety mass-produced in China by underpaid workers and sold cheaply. It’s hard to beat those prices!

But why don’t the Chinese update their varieties? Because they’ve been growing the same ones for over a century and they still sell! Their attitude seems to be: if it ain’t broke, don’t fix it!

You often hear the belief that only double peonies flop and that single varieties need no staking, but that’s incorrect. True enough, double flowers are heavier and need sturdier stems than the average single-flowered peony, but there are hundreds of double peonies that have the sturdy stems required and need no staking. You just have to buy the right ones.

Why not avoid the effort of staking and plant peonies capable of standing on their own? They often cost more because they’re produced on considerably lower scale than Chinese imports, but end up costing less … if you consider that “time is money.” Less time spent installing stakes then removing them in the fall, then replacing them in the spring, ad infinitum, means you have more time to enjoy your peonies than struggling to keep them looking good.

Among herbaceous peonies, here are some that are sturdy and beautiful, certainly outdoing the old-fashioned floppy ones. And most Itoh (Intersectional) peonies and tree peonies likewise need no staking.

Where to Find Sturdy Peonies

If your local garden center sells only junk peonies, why not get yours from a peony specialist? Most sell by mail order, so you can get top quality, non-floppy peonies no matter where you live. The better sources include hints about the peony’s stem in their descriptions: “sturdy stems”, “strong stems”, “no staking needed”, “good growth habit”, “Staking: no”, etc. And if you’re not sure, ask before you buy: these companies know their peonies and will be pleased to help.

Here are a few nurseries to try:

Sturdy peonies: they’re out there and they’re garden worthy. You won’t regret trying them in your own garden.

Article adapté from one originally published on June 27, 2015.