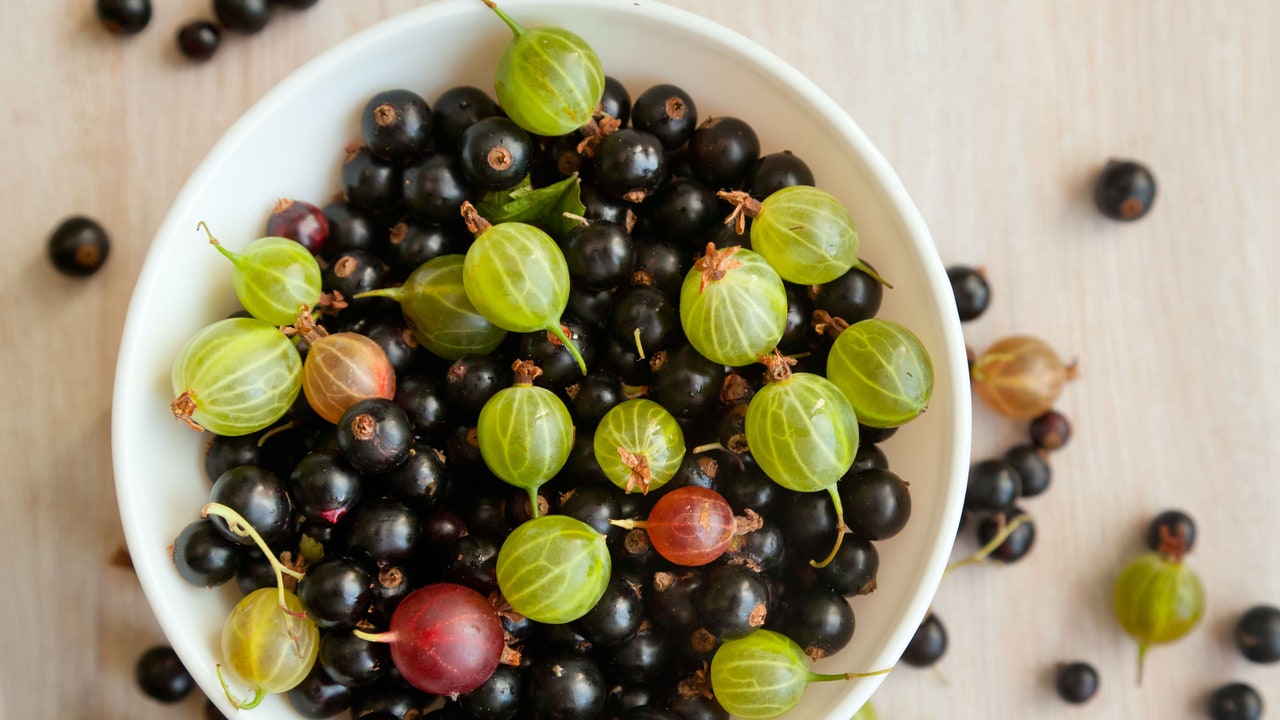 I don’t grow currants or gooseberries and haven’t for ages. I just find them too much work for the results you get. There always seems to be something attacking them that you really have to get up out of your hammock to treat and I don’t want to be bothered. If I want gooseberries or currants, I can either go harvest them from the wild, like while on a camping trip, or I can buy them and let someone else worry about their enemies.

So my advice to laidback gardeners is … don’t grow them.

However, for those of you who are less evolved in your gardening habits, here are some suggestions.

What Are Currants and Gooseberries?

First, currants and gooseberries are closely related shrubs in the genus Ribes, of which there are some 150 species found throughout the Northern Hemisphere and extending to the Southern Hemisphere in mountainous areas of South America. They belong to the family Grossulariaceae of which they are the only members, so have no close relatives.

Why our ancestors decided to call the larger-berried ones with spiny stems, usually borne singly or in groups of two, gooseberries (most cultivated ones are R. uva-crispa varieties) and the smaller ones without spines and generally borne in long clusters, currants, I have no idea.

Gardeners further divide them into black currants, also spelled blackcurrants (R. nigrum) with black berries and red currants or redcurrants (R. rubrum and others) with red ones. White currants are just white-berried varieties of red currants. The jostaberry (R. × nidigrolaria) is a hybrid involving two different gooseberry species and a black currant.

Then there are ornamental currants, such as the red-flowering currant (R. sanguineum), the alpine currant (R. alpinum), the golden currant (R. aureum) and the highly scented clove currant (R. odoratum). Interestingly, the pretty ones seem to have few insect pests.

All currants are shrubs, mostly of fairly small size, with small maple-shaped leaves.

If it weren’t for their pests, currants and gooseberries would be very easy to grow. They thrive in full sun or partial shade and most garden soils except the very driest ones, although they do appreciate regular applications of compost and a good mulch. They’re self-fertile, so even a currant or gooseberry grown on its own will produce fruit. They vary in cold hardiness, but most can be grown in USDA hardiness zones 3 to 7 or 8. They don’t do well, though, in subtropical and tropical climates: they seem to need at least a cool winter rest.

Pruning is usually done during the dormant season and simply involves removing older, less productive branches to give younger ones more space.

So … up to this point, they’re actually quite easy to grow!

⚠️Warning: some species and notably black currants (R. nigrum) are alternate hosts of white pine blister rust (Cronartium ribicola) and should not be planted near white pines (Pinus strobus, P. monticola and others). In fact, their culture is banned in many areas of North America where white pines grow wild, although there are rust-immune cultivars like ‘Consort’.

And here is why you may not want to grow currants and gooseberries: they’re ultra-attractive to insect pests. Their most common enemies include:

Currant sawfly, Gooseberry Sawfly or Currantworm (Nematus ribesii Nematus leucotrochus andPristiphora appendiculata): There is more than one species, although N. ribesii is the most widely distributed and most devastating. There are two or three generations of this sawfly per season, at leaf out, in early summer (usually the most damaging generation) and possibly a third in late summer.

The larvae look like caterpillars (and indeed, are often called false caterpillars), but are the larvae of a small fly, not a moth. Therefore, treatments against caterpillars, such as Bti, will not work on them.

The currantworms, small with black heads and green at first, later developing black spots, congregate in groups and eat leaves. They measure about 20 mm (3/4 inch) when fully grown. They eat rapidly and, in their numbers are important, can defoliate the plant in only a few days. Then they drop to the ground, spin silk cocoons and pupate.

The adult sawfly, yellowish with dark markings, is rarely noticed. She lays her white eggs under currant leaves, generally towards the base of the shrub. Often the damages are not noticed at first, as feeding begins on the lower, inner reaches of the shrub where the currantworms can work sight unseen.

The best treatment is either handpicking, knocking them off with a blast of water or spraying with insecticidal soap, neem or pyrethrum.

Since the sawfly overwinters as a pupa in the ground at the base of the plant, raking the soil in the fall can expose them to their enemies. Chickens are very good at controlling them at this stage.

Currant fruit fly, currant maggot or gooseberry maggot (Epochra canadensis): Adults, small yellow flies with dark bands across the wings, emerge when currants are in bloom and lay their eggs in the fruit as it forms. The larvae—a small yellowish-white maggot—feed inside the berries, emptying them.

Affected fruits are blotched on one side, ripen prematurely and many drop to the ground before the normal harvest time. The insect leaves the berry and spends the rest of the summer and winter in the soil. Damage is usually noticed in late July. There’s just one generation per year.

Set out a yellow sticky trap as the flowers open: they don’t catch pollinators, but will catch at least some female currant fruit flies. You may have success covering your shrub with floating row cover just as flower petals fall. Don’t place it too early, though: you need to wait until the bees have finished pollinating. If you’re too late, pick and destroy all infested fruit on a daily basis or spread a tarp under the bush starting mid-June to keep the larvae from pupating in the ground below.

Spraying can help if you do it in a timely manner. Don’t spray while the plant is in bloom, of course, to protect the pollinators, but several treatments are possible immediately after, as the petals fall off. You can, for example, try spraying the just-forming berries with kaolin clay. The clay irritates the fly and discourages it from laying eggs. Or spray with insecticidal soap, neem or pyrethrum.

And there are others: aphids, scale insects, stem girdlers, leaf miners and spider mites, while the newest pest is the spotted-wing drosophila (Drosophila suzukii), originally from Southwest Asia, but currently invading currant and gooseberry plantations in Europe and North America.

Oh, and need I mention that there are diseases as well? Leaf spot, rust, anthracnose, powdery mildew, etc.

You choose whether you want to grow your own currants or gooseberries, but when pests appear, and they will, don’t say I didn’t warn you!

2 comments on “Dealing With Currant and Gooseberry Pests”