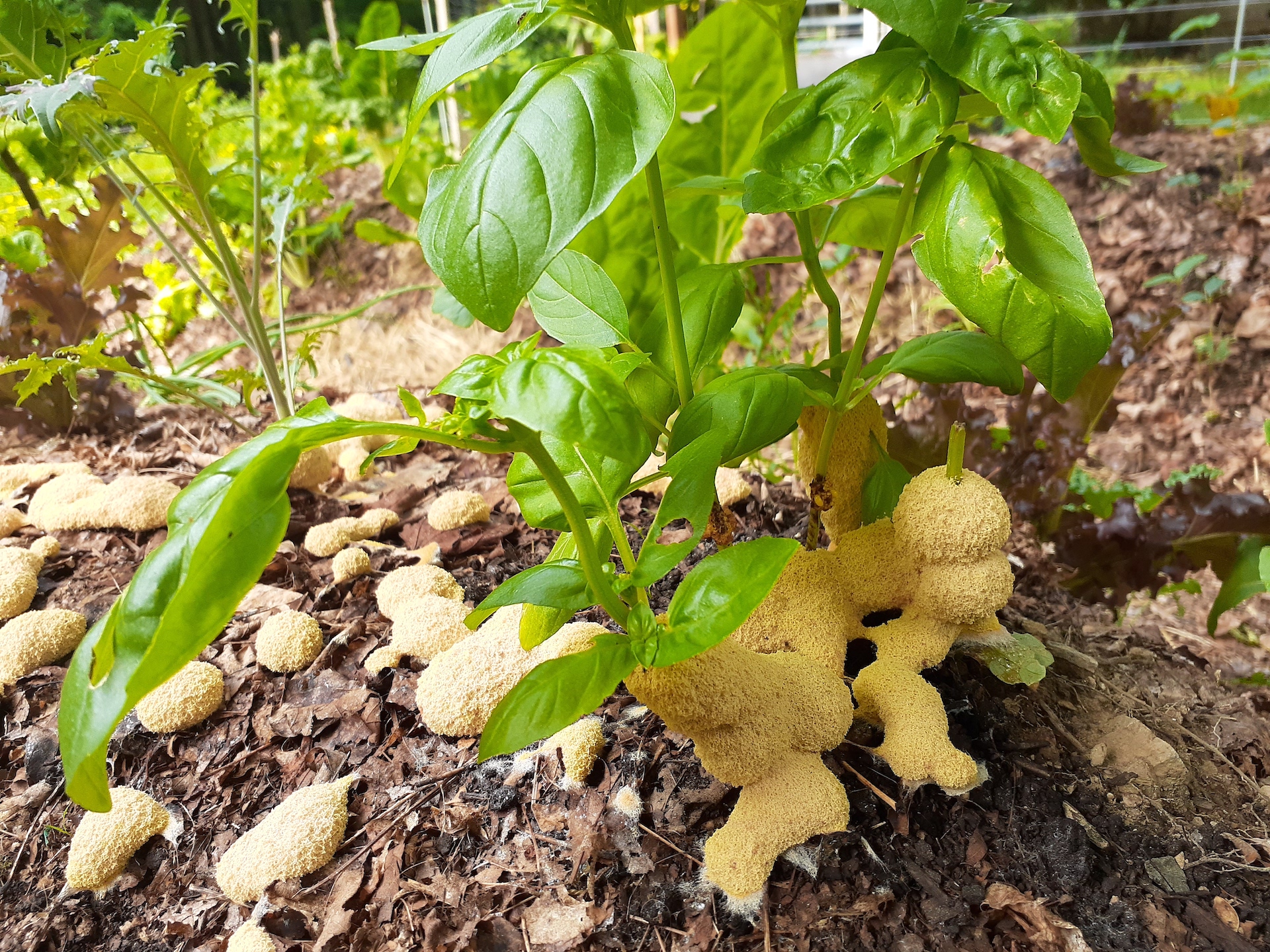 Strange things happen in gardens all the time, but one of the strangest is when yours is visited by slime mold.

Dog vomit slime mold was long considered a fungus, but is now known to be something quite different, belonging to a phylum within the Protista Kingdom (neither plant nor animal) known as Myxomycetes (a word I would be incapable of spelling if my life depended on it: thank heavens for copy-pasting!)

Unlike fungus, dog vomit slime mold moves about like an amoeba, slithering slowly at night so that on any given morning it’s never quite where it was the day before, nor is it in exactly the same shape. The term for this phase is “plasmodium”.

Its wandering, engulfing habit even inspired a movie: The Blob (1958 and again in 1988), in which a creeping, unstoppable gel engulfed an entire town. The real stuff is much smaller, forming a mass rarely much more than 2 to 24 inches (5 to 60 cm) wide. There aren’t many towns that small.

Dog vomit slime mold is found worldwide, largely in forests and other shady, moist areas. And it loves similar sites in gardens, notably in decaying plant material, such as wood-based mulches and grass clippings. It is normally harmless to people* and plants, living mostly on bacteria, molds and fungi.

*Its spores have been known to trigger hay fever and asthma in susceptible people, but that is very rare.

In fact, dog vomit slime mold is actually edible. In parts of Mexico, it’s collected and scrambled with eggs in a dish called “caca de luna” (I’ll let you guess the meaning of that). Honestly, caca de luna doesn’t sound too appetizing to me.

Eventually, after a few days or a few weeks, dog vomit slime mold seems to slow down and dry up. This is the sporulation phase. Spores will be carried off by the wind or transported by beetles to start a new colony elsewhere.

What to Do About It?

Actually, you don’t need to do anything. It’s harmless to your garden plants, although low-lying leaves covered in it for too long may turn pale, and will eventually go away on its own. Keeping conditions drier will help prevent it from recurring.

If it bothers you, rake it under, blast it off with spray from the garden hose or pick it up with a shovel and drop it into the compost. If it’s in a lawn, mow it down.

Or bring the neighborhood kids over for a look-see: it’s a fascinating “creature” (am I allowed to use that term?) that will teach them something about the persistence of life. And they’ll love the name dog vomit slime mold!