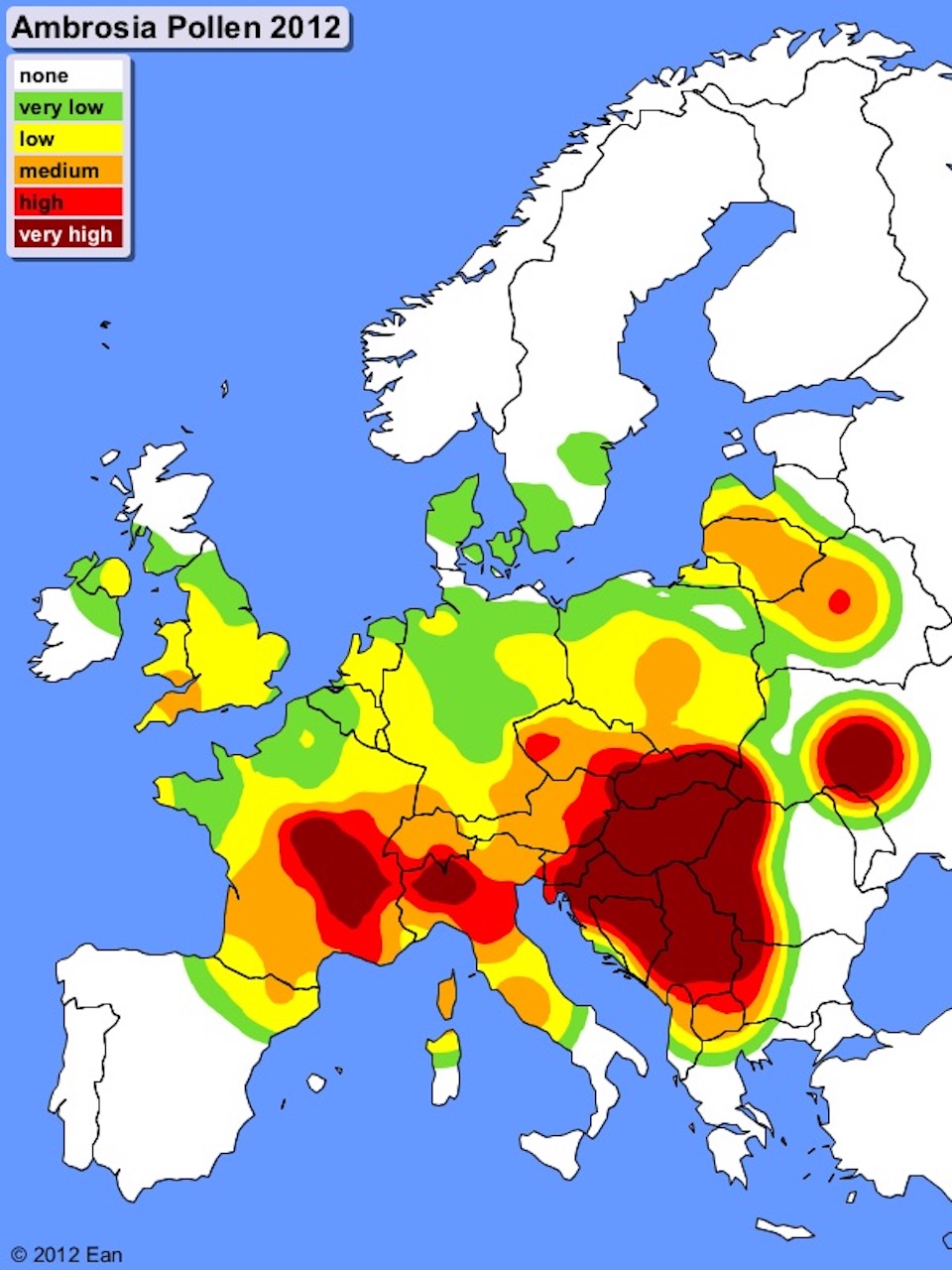 Distribution of ragweed pollen in Europe just before the arrival of the ragweed beetle. Ill.: European Aeroallergen Network

Europe has been under the attack of common ragweed (Ambrosia artemisiifolia), accidentally introduced from North America, for a century now and it has spread substantially, especially over the last two decades, to the point where it is now present nearly everywhere in Europe and indeed in Asia as well.

The airborne pollen of this North American plant is the main cause of late season hay fever, a new disease for Europe, but one from which some 13.5 million Europeans already suffer, causing not only a lot of human discomfort, but costing health-care systems billions of euros each year.

But after watching the pollen rate rise constantly, year after year, Italian authorities were surprised to see it drop radically in 2013 near Milan’s international airport. An investigation showed that ragweed plants there were being devoured by a small beetle, reducing its flowering to nearly zero and thus causing ragweed-induced allergies to drop to barely perceptible levels.

The culprit was soon identified as a North American interloper, the ragweed leaf beetle (Ophraella communa). It had apparently traveled to Italy by plane on baggage or merchandise, then escaped into the wild near the airport.

Interestingly, the beetle was already being studied in Europe as a possible means of biological ragweed control, but authorities had been hesitant to release it, concerned it might attack sunflower plantations or other crops, as it’s possible to induce it to consume sunflower leaves in a laboratory setting.

The accidental release let the horse out of the barn, though. Soon it began to spread throughout Northern Italy, affecting 100% of ragweed plants in some areas … and as it did, airborne pollen levels dropped to by up to 82%.

It turns out that this beetle is not at all interested in sunflowers in real life (whew!), but rather consumes only ragweed.

The ragweed leaf beetle was also accidentally released in Japan in the 1990s and it is now widespread and successfully reducing pollen levels. It likewise showed up and is thriving in China. In Europe, it is for the moment found mostly in northern Italy and nearby Switzerland and has recently been discovered in Croatia. Authorities are analyzing the situation before introducing it to other areas.

The beetle is especially efficient in warmer climates, such as Italy, where there are 4 generations per year. It might not be as efficacious in colder climates where there may be only one generation per year.

The ragweed leaf beetle is a small, innocuous-looking beetle about 3.5 to 4 millimeters long, brownish or yellowish with dark brown stripes and dark brown antennae.

Its larvae are yellowish to grayish and look a bit like pillbugs.

Females lay clusters of orange eggs under ragweed leaves; when the nymphs hatch, they defoliate the original plant, then pupate for a short period. When they emerge as winged adults, they disperse to other ragweed plants. By the time the fourth generation of beetles has eaten its fill, the plants are so damaged they no longer produce flowers.

The ragweed leaf beetle was also released, purposely, in China to control a similar problem and with equal success. A different North American ragweed leaf beetle (Zygogramma suturalis), with three broad deep brown stripes on a yellow background, has been released in Russia, also dealing with a ragweed problem, with great success so far.

Why Not in North America?

Given the huge success so far of ragweed control by the two ragweed beetles in countries to which they have been introduced, the question that begs to be answered is … why are these insects not keeping ragweed under control in their native North America?

One or the other of these ragweed beetles (and other species) are found throughout the United States, southern Canada and northern Mexico, roughly covering the entire range of common ragweed, yet ragweed allergy remains a serious problem there, affecting about 49 million people and costing billions of dollars each year in medications and lost wages. The beetles have therefore been present for thousands of years. Why are they not obliterating ragweed in its home territory?

The answer is likely because something is limiting their predation.

Remember, these beetles have no natural predators in Europe and Asia and therefore the only thing that could stop their proliferation would be a crash in the ragweed population. (Since ragweed seeds can geminate up to 40 years after they were produced, that might take a long time!)

In North America, there are likely dozens of predators and parasites of ragweed beetles, from diseases to insects (ladybugs, lacewings, etc.). And even local birds probably see them as an excellent food source. Also, the beetles produce fewer generations in the northern part of their range, so consume fewer leaves there. As a result of all these factors, beetle populations in North America tend to cause only limited damage to ragweed, not enough to prevent them from flowering … and if ragweed flowers, it will release its pollen: about a million grains per plant every single day!

One idea that is under consideration is the mass rearing and subsequent release of one or the other of the ragweed beetles in order to allow it to outcompete its predators and overcome climactic limitations. This is already being done in China and I’m sure ragweed sufferers would welcome it in North America as well.

A future without ragweed pollen filling the air? I for one look forward to it, as I’m a ragweed sufferer myself.

7 comments on “Accidental Invader May Stop Europe from Sneezing”