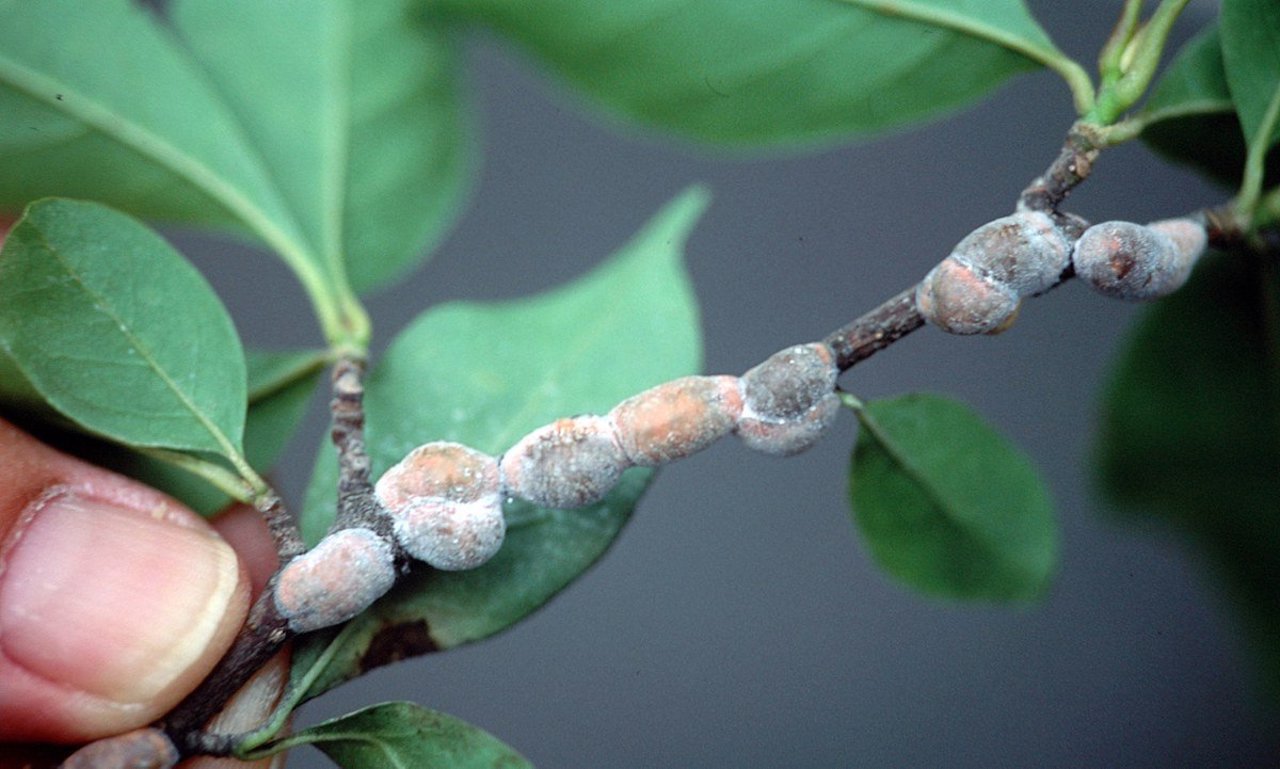 Question: My magnolia has white bumps on its bark and a lot of insects like ants and wasps seem to be visiting it (looking for food?). Is this a problem? What should I do?

Answer: The visiting insects are not a problem as such, it’s what they’re coming for that is worrisome. They’re probably looking for honeydew, a sugary liquid given off by sucking insects, and that means the white bumps on your magnolia’s bark are likely scale insects.

*It has been claimed to affect American tulip trees (Liriodendron tulipifera), which are in the magnolia family, but some entomologists believe this is a different scale insect.

With magnolias becoming more and more popular as garden plants, magnolia scale has spread beyond its original range, and is now common well into southern Canada and is making serious inroads into the US Midwest. The original spread was apparently due to infected nursery plants, but is now self-sustaining.

Magnolia scale is huge for a scale insect: ½ inch (12.5 mm). It looks like a tan or whitish to pinkish bump on trunks and branches where it accumulates in great numbers.

Also, leaves yellow and drop off and smaller branches die. Growth is stunted and flowering is reduced. Heavy infestations kill the host tree.

Eggs hatch out of sight under the female scale’s protective covering in mid-August to mid-September. At this point, the female is at her full size and often takes on a pinkish tinge. The nymphs emerge in waves over about a month at the end of summer and early in the fall, usually late August through September, although that will vary from year to year depending on the weather.

The brown-colored six-legged nymphs, called crawlers at this stage, are the only mobile stage and soon leave their mother, wandering to other parts of the magnolia over a 48-hour period. They are hard to see, being smaller than a pinhead. They are wingless and unable to fly, but at this stage, are often carried to other magnolias by insects, birds or pruning tools. Once they settle down, they pierce the thin bark and start drinking sap, then lose their legs. Bt now, they are oval, with a waxy coating, and 3/64 to 5/64 inches (1 to 2 mm) long.

The females die after releasing the nymphs, but their shell can remain fixed to the bark for weeks, making it hard to determine whether any given treatment was effective.

After winter dormancy, the nymphs molt and increase in size, forming large rounded domes on the bark. The females become covered in white powder. The males, only 1/8 inch (3.5 mm) long, form a flattened dome and turn translucent white.

Around the beginning of July, males metamorphose into gnatlike pink to yellow winged insects. After mating with the females, they die, and females lay their eggs.

Then the cycle starts all over.

Since magnolia scale mostly spreads through the transportation of contaminated nursery plants, carefully inspect all magnolias plants before purchase. If you do this and there are no other magnolias in your neighborhood, your magnolia will likely forever remain scale free.

Brush infected shrubs with a soft brush dipped in soapy water, removing all the scale insects, dead and alive. If the branches are too high, sometimes you can knock them off with a good spray of water. They’re easiest to remove in midsummer, when they turn pinkish just before releasing the nymphs. Prune off any severely infected branches, disinfecting the pruning shear between each cut with 70% rubbing alcohol (isopropyl alcohol).

Early in spring, before the leaves open, spray your magnolia with horticultural oil (dormant oil). Look for a period when daytime temperatures will be cool but above freezing for 3 to 4 days in a row (54 to 60 °F/12 to 15 °C would be ideal) with no risk of rain for 24 hours. Make sure to coat all parts of the magnolia evenly.

You can also treat young nymphs with insecticidal soap, therefore in late summer and early fall as they emerge or have just settled down. Spray weekly for 6 weeks to ensure reaching all of them.

Finally, once you have the initial infestation under control, inspect your magnolias annually, especially if there are other magnolias in the neighborhood.

Magnolia scale: surprisingly large, surprisingly common and not easy to control. Keep your eyes open, as it’s far easier to nip an early infestation in the bud than to bring a full-fledged one under control.

3 comments on “Magnolia Under Attack”