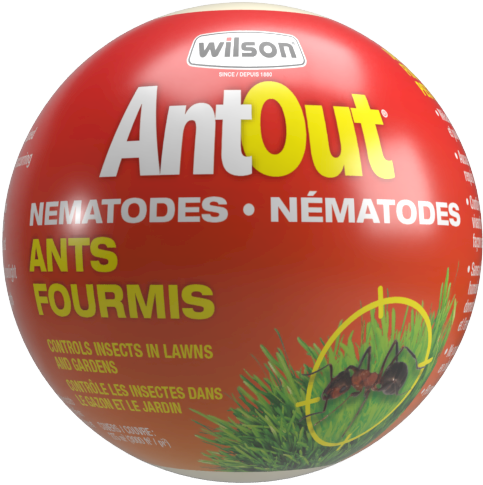 I recently tried using beneficial nematodes to control ants in my yard. Not that I really had to: I’m pretty open to ants as long as 1) they stay outdoors and 2) don’t attack people. But I had recently taped a TV show about using nematodes to control insect pests and ended up bringing home a sample of AntOut Nematodes. Since I had the product, I figured I’d try it and write about the results.

The product in question comes in a round plastic ball and does not require refrigeration. (This is fairly new; previous generations of nematode treatments required refrigeration both in the store and at home.) It does have a limited life span, though, and has been to used the year in which it was purchased.

Nematodes are microscopic worms. There are thousands of species, some of which are harmful to plants, but many others are parasites of insects. That’s the case of Steinernema feltiae, the species of nematode used in the Green Earth product. Besides ants, this species can treat other pests such as flea beetles, houseflies, sawflies and fungus gnats. Other nematode species and strains are available that control white grubs, chinch bugs, fleas and other pests.

I have dozens of colonies of meadow ants (Lasius spp.), little brown ants that make small crater-shaped mounds of soil particles with an entrance hole in the center. They’re found in my lawn, gardens and among paving stones. They’re essentially beneficial: they aerate the soil, pick up detritus and do no harm to my plants. I’ve never bothered trying to eliminate them, nor do I intend to: live and let live, I say. I’m assuming most other gardeners feel the same way.

However, there were two colonies of field ants (Formica spp.) in my yard. These are larger ants, usually black (mine were), although they do come in other colors, and they build bigger sandy-looking nests with multiple entrances. They’re not carpenter ants (they live in wood) and almost never go indoors, but their large nests often destroy plantings and sections of lawn, mostly through burying plants and excessive tunneling. They’ll even bite if you attack their nests, but their bite is more surprising than painful. And field ant colonies are long-lived: up to 10 years.

Given their more harmful nature, I decided field ants would be the ones I would treat.

One colony was in my lawn and had been there for a number of years. Not being a lawn person, I had simply been ignoring it. My belief was that this colony was in decline: it didn’t seem that vigorous. I’ll call it the lawn colony.

The other was a new one, first seen this spring, and it was coming up near my front door, half in paving stones and half in a flower bed. Their mound was growing weekly. I’ll call them the paving stone colony.

I first read the label on the product and it suggested spraying them onto nests. However, on the Web site I found instructions for watering them in … much more practical for me.

It certainly was simple enough. I was to soak the area the previous day (done), then open the ball and remove the tiny filter bag of filler that container the dormant nematodes. As instructed, I dropped the bag into a 5-gallon watering can and filled it with water.

Apparently, the product can cover 16 ant nests or up to 3000 sq. ft (275 m2), but I had only two nests. So, I slowly poured about one quarter of the solution onto and around the lawn colony, then did the same for the patio one. After, I repeated simply because I had enough product to do so. Then I was to water the product in, which I did.

Follow-up was to consist of watering daily for four days. I did that too.

By day 4, the lawn colony was gone. Not a living ant has appeared since and the lawn is actually filling in already. But the patio colony showed no reaction at all and continues to prosper.

At any rate, the nematodes are supposed to multiply and remain alive for the season, so they might yet seek out and destroy the patio ant colony. And I would think conditions are good for them right now, as it has been rainy ever since I applied the nematodes. However, they’re not tolerant of prolonged periods below freezing and will likely be killed in the cold winters where I live. So, if the colony does not reappear next spring, that could still be the results of this summer’s treatment. If so, I’ll update this article.

However, at this point, treating ants with nematodes doesn’t seem to be a miracle solution, working in some cases, but not in others.