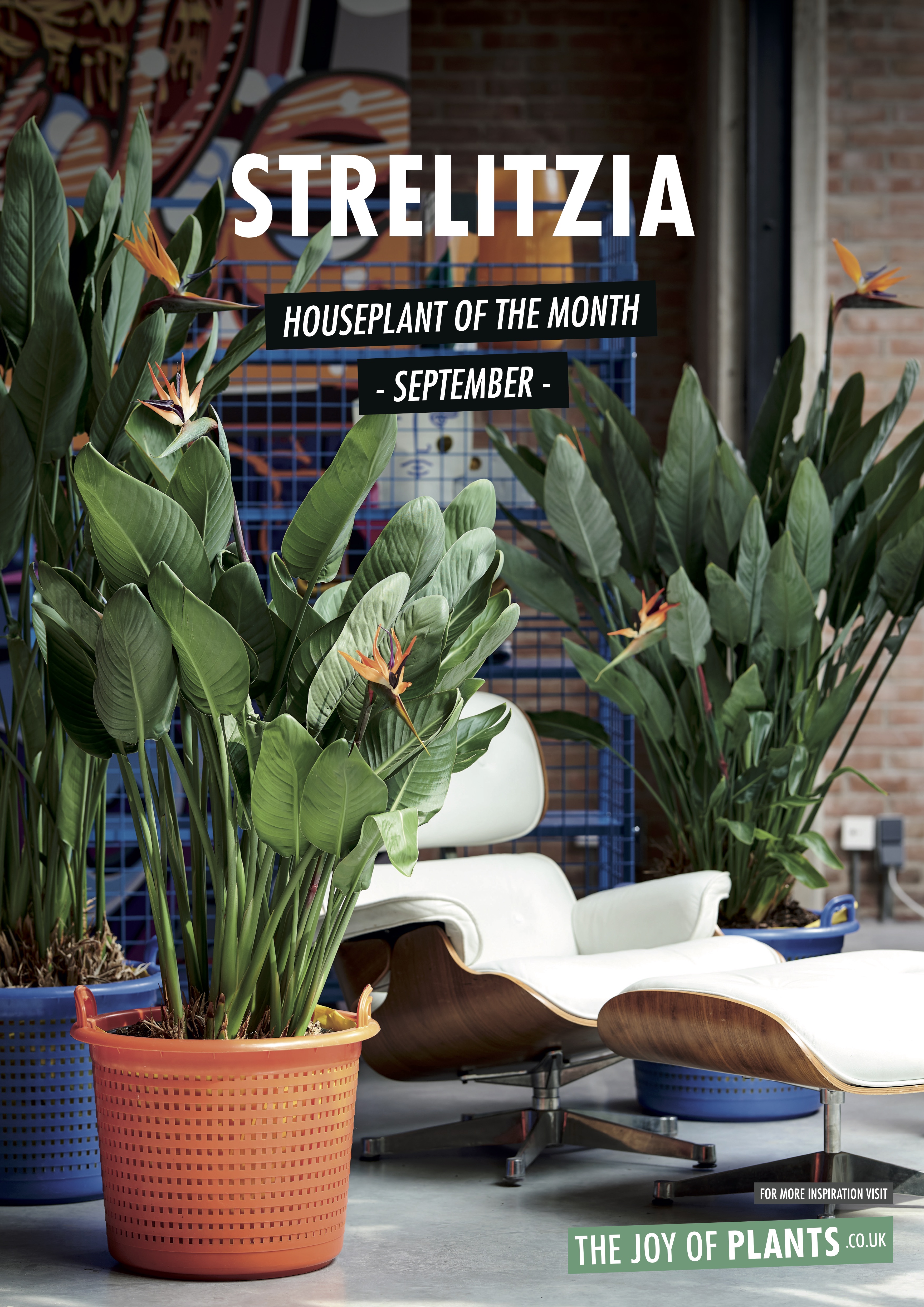 The strelitizia (Strelitizia reginae) is an eye-catching plant with a tropical appearance that certainly lives up to its most popular nickname: bird of paradise plant. This comes from the large flower that features a horizontal beak-like sheath topped by a crown of flowers, recalling the beak and head of one of the birds of paradise of New Guinea (family Paradisaeidae) or possibly an African crowned crane (it is also called crane flower).

The plant of about 3 to 4 feet in height and, eventually, 2.5 to 3 feet in diamètre (90 to1,20 cm by 75 to 90 cm) forms a fan of tough, thick, upright petioles each ending in a sturdy grayish paddle-shaped leaf. As the plant ages, it divides at the base, forming a clump of multiple plants. The bird of paradise is a striking enough in appearance to be grown strictly as a foliage plant, but its brilliantly colored bloom remains its main claim to fame.

Flowers can appear in any season, although mostly typically at the end of summer or in fall.

The blooms too are borne on a thick, sturdy stem. From the green, red-edged sheath arises a fan of vivid orange sepals and a pair of more horizontal purplish-blue petals joined together and forming a nectary. A series of flowers appears one after the other from the same sheath, so each flower head can remain in bloom a month or more.

In its native South Africa, the plant is pollinated by sunbirds. They land on a special perch formed at the tip of the petals. As they land, their weight opens the flower and reveals white pollen which the bird then picks up as it bends over to drink the flower’s nectar. Thus, as it moves from flower to flower, it pollinates the blooms. Since sunbirds of the proper species are absent outside southern Africa, bird of paradise flowers are not pollinated when it is grown elsewhere and therefore produce no seeds. If seeds are required, you have to pollinate them by hand.

The plant is a member of the tiny Strelitziaceae family, closely related to bananas and heliconias. There are five species, of which Strelitzia reginae is by far the best known. The plant is named after the wife of the King George III of England, Charlotte von Mecklenburg-Strelitz, who loved plants. The second name reginae means ‘of the Queen’. Birds of paradise were first cultivated outside of South Africa at the start of the 18th century and are now grown worldwide in tropical or Mediterranean climates as well as indoors.

Streltizias are also grown for the cut flower industry and flowers are shipped all over the world.

There are various Strelitzia species, all upright with sturdy grayish leaves. As mentioned, S. reginae, with bright orange and blue flowers, is the most common species. A rarer cultivar, ‘Mandela’s Gold’, has yellow and blue flowers.

Narrow-leaved bird of paradise (S. juncea) is similar in size and color, but, curiously, when grown in full sun, produces no leaf blade, but rather just a long, pointed petiole, like a reed (that’s what juncea means).

A less well-known species is the giant or white bird of paradise (S. nicolai), a much bigger plant with larger, greener leaves that tear long the veins like a banana leaf, eventually forming a thick trunk-like stem. This species has white and deep purple flowers, but is much trickier to bring into flower. It’s therefore mostly used strictly as a decorative foliage plant when grown indoors. Outdoors, grown in the ground in tropical climates, it does bloom and can become a tree 20 feet (6 m) high!

Birds of paradise (Strelitzia) are sometimes confused with heliconias (Heliconia spp.). The flowers come in a similar color range, but are arranged quite differently, and the leaves are inevitably less leathery and are pure green, not grayish.

What to Look for When Buying a Bird of Paradise

Did you know that the bird of paradise is the official flower of Los Angeles, California?

Incorporate industrial materials, bright colors such as yellow and blue and powerful patterns into your display. Line markings and graffiti designs suit bird of paradise well and fit with the interior deco trend that rejects perfection. In this style, real and artificial mix: you decide what you find beautiful.

The overall look can have a seventies vibe to really show off the bird of paradise’s on-trend credentials.

2 comments on “Bird of Paradise: September 2020 Houseplant of the Month”