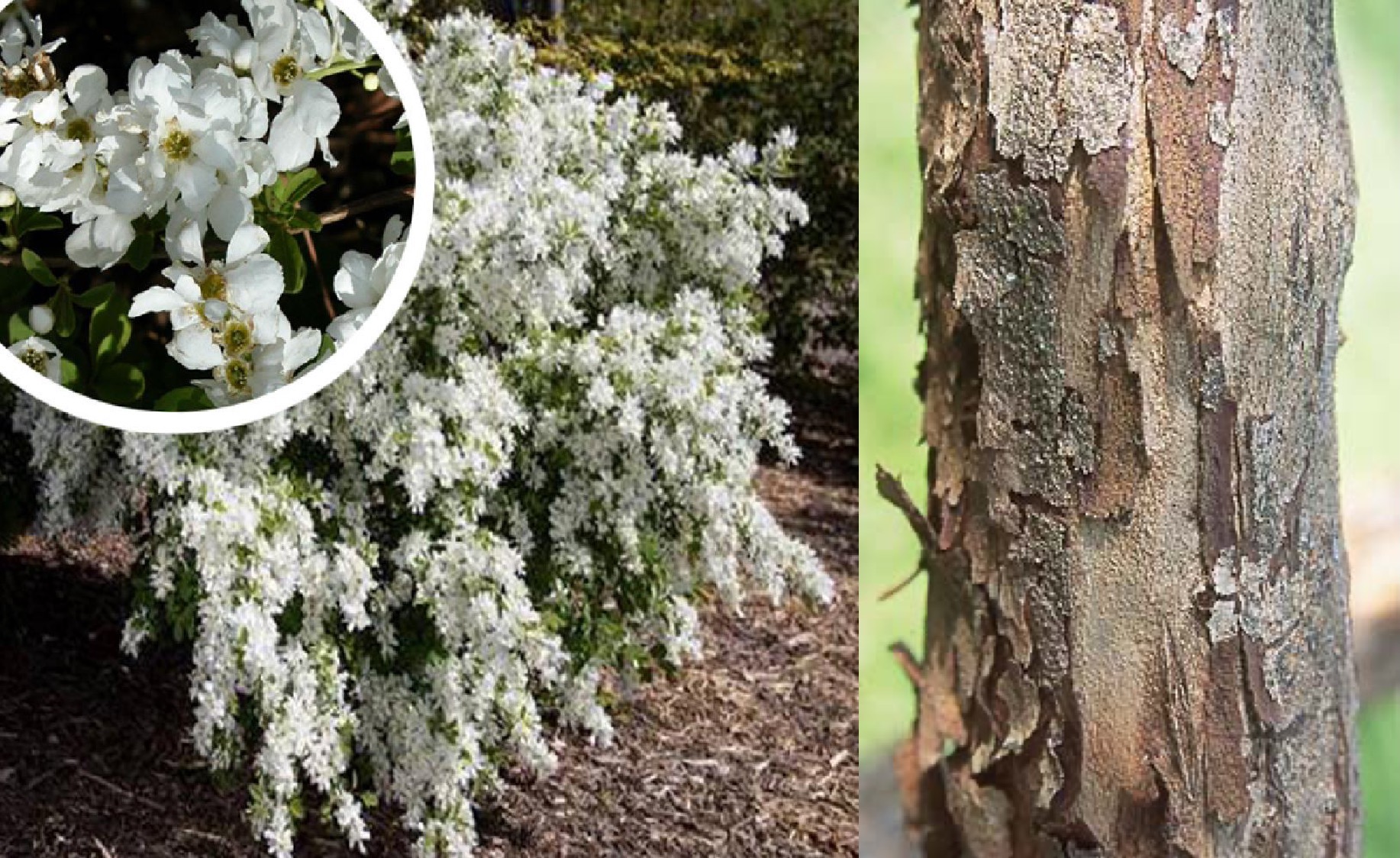 Pearlbush has beautiful white flowers in the spring… and older specimens show attractive bark in the winter. Photo: http://www.pepiniere-bretagne.fr & landscapeplants.oregonstate.edu

Question: I have a shrub called pearlbush (Exochorda × macrantha ‘The Bride’) which has been losing its bark by bits and pieces for a few years now. However this year, almost all the bark of the trunk is sloughing off in patches: there is hardly any left on the trunk! It was magnificent in May, covered with white flowers as in previous years, and showed no other signs of illness. Is this normal? Or if not, should I cover the trunk with something for the winter?

Answer: Peeling bark is actually quite normal for this species. The pearlbush’s bark is said to be “exfoliating”: it comes off in strips over time. This trait is, however, only seen on more mature specimens, usually after many years of culture. And rather than worrying you, it’s supposed to please you. It’s one of the attractions of the shrub. After masses of white flowers in the spring and attractive green leaves all summer, it now offers stunning peeling bark in the winter.

Under the bark that peels away there is already fresh, healthy bark, so the plant doesn’t suffer at all. Obviously, there is no need to cover or otherwise protect the exfoliating trunk: just relax and enjoy the show!

The pearlbush isn’t the only woody plant with exfoliating bark, by the way. This is a fairly common trait and seems to have evolved independently in many families of plants. For example, birches are well known for their attractive peeling bark.

Very often the trees and shrubs with exfoliating bark need time to start performing. Often their bark is smooth on young specimens, but changes in texture as they mature and that can be decades later. Even young birches, though planted specifically for their “papery” bark, have smooth bark that clings to the trunk in their youth.

What Is Exfoliating Bark For?

No one is sure exactly why so many woody plants have bark that naturally exfoliates, but there are a few theories and, in some cases, there might be more than one reason. Here are a few:

But in most plants with peeling bark, the reason for this exfoliation is really not fully understood.

Trees and Shrubs with Exfoliating Bark

I thought I’d include a short list of trees and shrubs with exfoliating and often very decorative bark with this article. I mean, how many can there be? Several hours of research later, I came up with nearly 50! Here they are!

When Bark Shouldn’t Be Exfoliating

So much for species for which exfoliating bark is normal and even one of their attractions. But for most trees and shrubs, when bark starts sloughing off, that’s not good news!

You can see this effect following or during a fungal or insect infestation, after an extreme cold snap, after severe drought or when the bark has been physically damaged in some way. In such cases, any bark that comes free is likely dead or dying. It’s often a sign that the tree or shrub is in poor condition or maybe even dying.

In such a case, it might be best to have the damage seen by a certified arborist to see what can be done to save it, especially if it’s a tree you truly want to keep.

If that’s too much of an expense, at least cut away the peeling bark and clean the wound up to any healthy bark, exposing it to fresh air. Regularly sterilize any cutting tool in rubbing alcohol as you work. Do not apply wound dressing: that could make things worse! Then let Mother Nature see what she can go to fix things. If the tree is reasonably healthy, it will be able to cover the bare patch with fresh bark.

So much for trees. In the case of shrubs, try cutting it back severely, either just the damaged branch or all the branches. Make the cut well below the wound, up to to only inches from the ground. Most shrubs will resprout rapidly from the base. This is called rejuvenation pruning.

Exfoliating bark: it can either a beauty or a beast! It’s up to you to determine which.