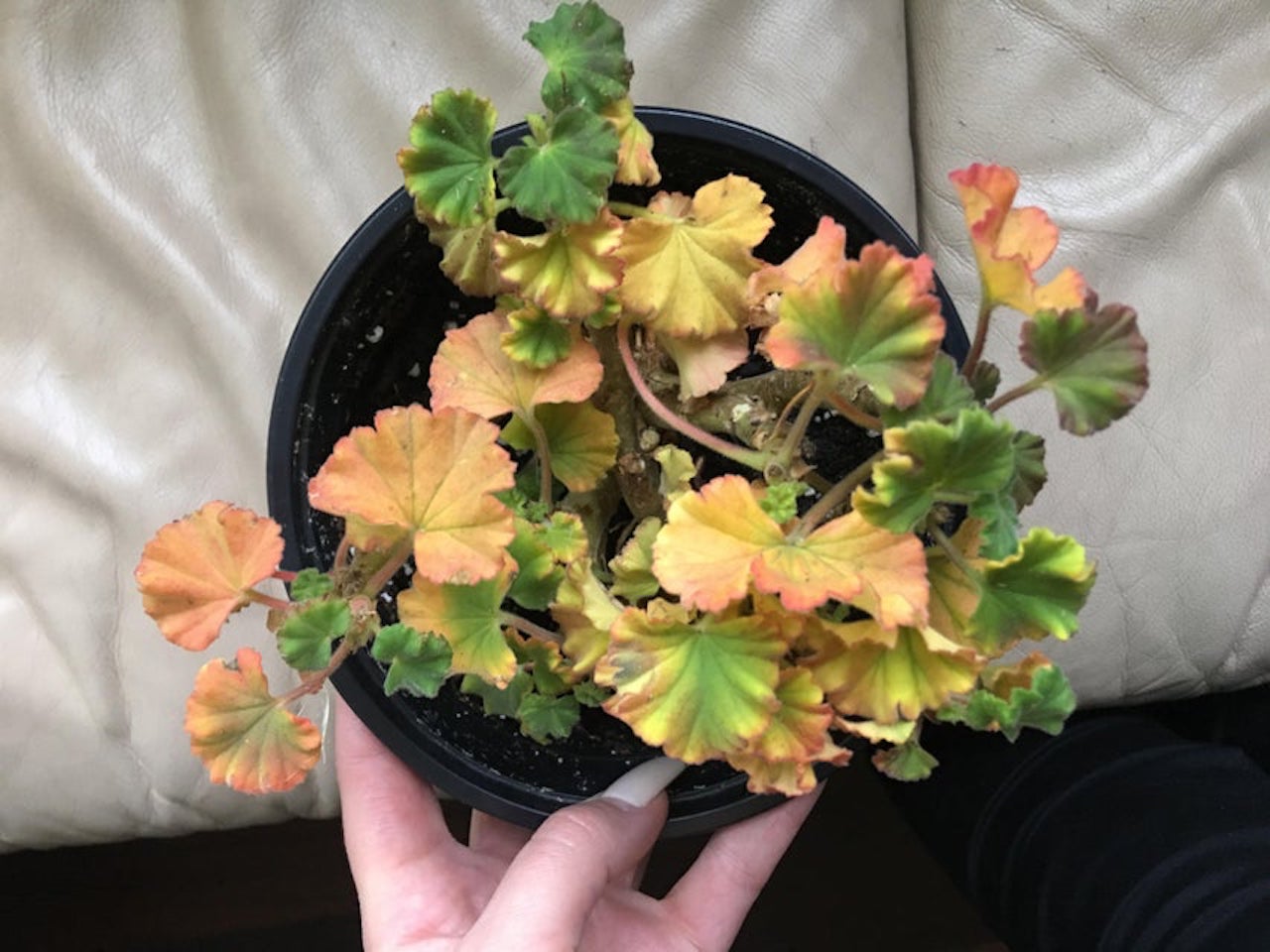 Pelargonium going through an awkward phase after being brought indoors. Photo: CriticallyChallenged, reddit.com

Question: I saved a few geraniums from my garden and brought them indoors for the winter. Now they’re losing a lot of leaves: they turn yellow and cling to the plant. When I touch them, they fall off. What am I doing wrong? Am I going to lose my plants?

Answer: The garden geranium is actually a pelargonium (Pelargonium × hortorum). It’s a shrubby subtropical plant whose ancestors originated in Southern Africa. Generations of gardeners have been bringing these pelargoniums indoors for the winter in colder climates and most manage to keep them alive, so I don’t think you need to be too worried about losing yours completely. However, yellowing leaves are fairly normal experience.

Essentially, when the plant is first brought indoors, it has to adapt to vastly different growing conditions: a more stable temperature, lower air humidity and, especially, a severe drop in light levels. Even in your brightest window, it receives much less light than it did when it was outdoors. Add to that situation the fact that daylight hours decrease rapidly over the fall. So, in spite of what may seem like a bright sunny windowsill to you, your sun-loving pelargonium is now growing in the plant equivalent of fairly deep shade.

Under those circumstances, most pelargoniums react by losing older leaves, those formed in full sun and adapted to that condition. It replaces them to some extent with new leaves better adapted to lower light, but still, the leaf loss can be quite important. Don’t hesitate to remove yellowing and brown leaves and right away your plant will look much better: a bit more open, perhaps, but at least decently green.

Helping Your Pelargonium Through the Winter

Overwatering becomes a problem with overwintering pelargoniums and can accentuate leaf loss. Since they receive less light, they need less water. They’re already semi-succulents, with thick stems that store moisture, so they need less water than most other houseplants. If you’re used to watering your plants on a regular schedule, say once a week, you might want to skip your pelargoniums every now and then. Actually touch the soil and if it’s still moist, as it might well be only a week after the last watering, wait until it’s dry before you water again. How frequently you need to water will vary according to conditions, so it’s impossible to give a fixed schedule, but you may only need to water yours every 10 days or so in a sunny spot, every 2 or 3 weeks in a shadier one.

So will giving them the most light you can. A large window facing south is best; east or west windows, acceptable. If feel you don’t have enough light, put them under grow lights, either fluorescent or LED, and give them 16-hour days.

Very dry air can also lead to some leaf loss, but there’s no need to get obsessive about it. Other plants may like 70% humidity, but pelargoniums are fine at 40%, something your home humidifier can easily handle. Certainly, don’t mist the leaves (a waste of time at any rate), as this can lead to disease problems.

In normal window light, it’s probably best to avoid fertilizing from October to late February. Under lights, fertilize only lightly. Any fertilizer will do.

With these few steps, you ought to be able to reduce leaf loss and enjoy your pelargoniums again, especially since they will flower indoors even under short days, although not as abundantly as outdoors in the summer.

1 comment on “Why Are the Leaves of My Geraniums Turning Yellow?”