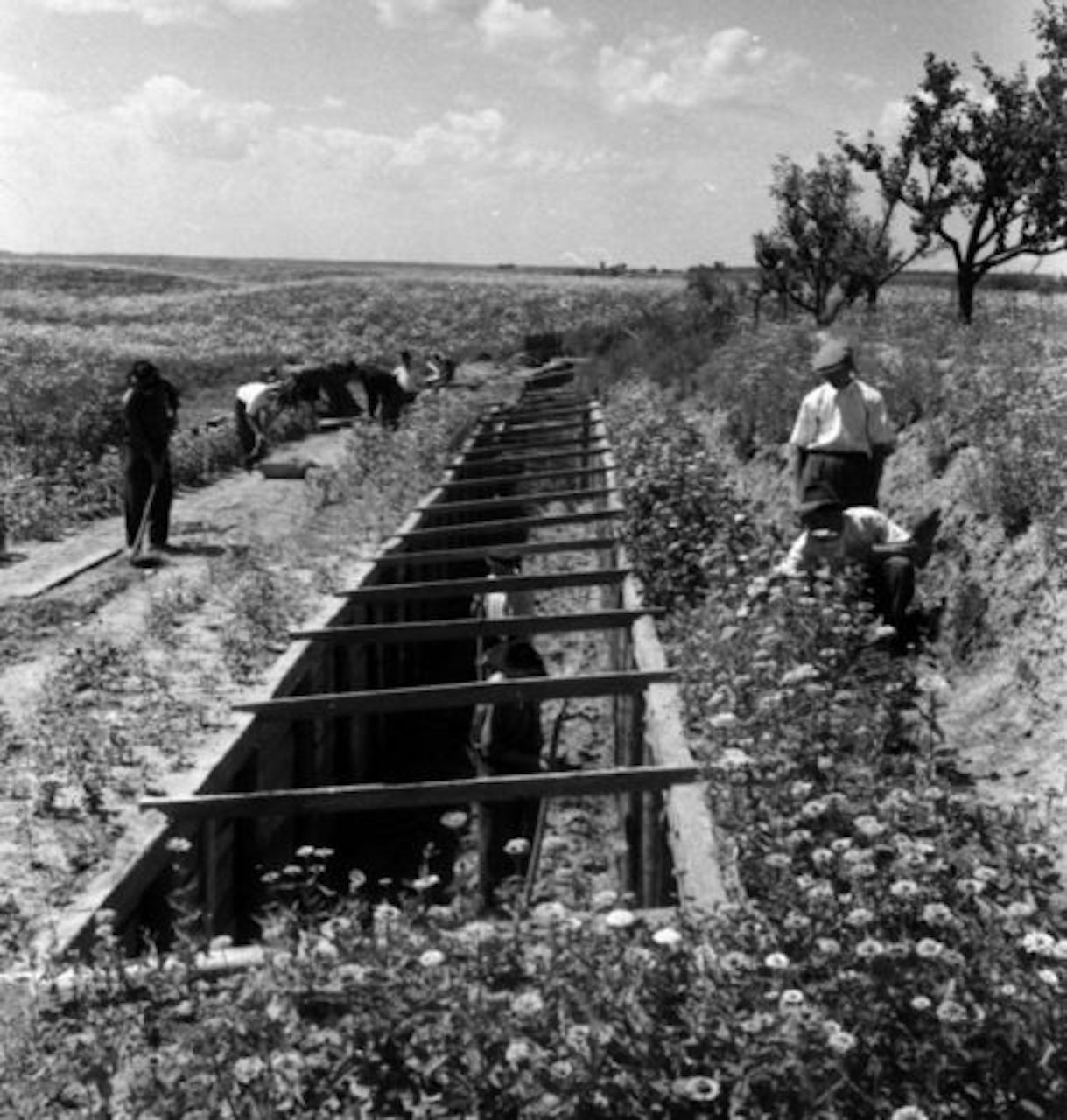 In a logical world, you’d grow citrus (Citrus spp., including oranges, lemons and mandarins) outdoors in an appropriate climate—in a tropical or subtropical area with winters on the cool side but frost free—and that would be the end of it. But humans always try to push the limits on everything, so you see citrus being grown on a huge scale in areas where frost does occasionally occur (leading to generalized panic and a media frenzy in those few years when frost does happen) and even indoors as houseplants where most produce no more than a few fruits per year. But the most extreme case I’ve heard of is growing citrus in trenches in cold climates.

This is not a technique for laidback gardeners. It’s extremely labor intensive and you have to be really keen to grow citrus to succeed with this. But in an article in Low-Tech Magazine (Fruit Trenches: Cultivating Subtropical Plants in Freezing Temperatures), writer Kris De Decker explains how the Russians, desperate for a local source of citrus fruits in the first half of the 20th century, pushed the limits of where they could grow citrus to the point where they were succeeding in places with truly cold winters: areas where temperatures could drop to -22 ºC (-30 ºC) and where the ground could freeze to a depth of 20 inches (50 cm).

This was never commercially viable, but that was not an issue in communist Russia. The country wanted to be self-sufficient in citrus production no matter what the cost. And it succeeded! From 1925, when citrus-growing was first introduced, until the 1950, the area consecrated to citrus-growing went from 0 to 74,000 acres (0 to 30,000 hectares), giving 200,000 tonnes of fruit, enough to make the country independent of fruit imports. Mandarins were the main crop, as they are fairly hardy, but oranges and lemons were also grown.

Various techniques were used to get citrus to grow beyond their normal range, including choosing and developing extra hardy clones, using dwarf and semi-dwarf trees pruned to remain low to the ground so as to profit from ground heat, planting on south-facing slopes and heavy mulching. But those would only bring in decent results in areas where winter temperatures dropped to no less than 5 ºF (-15 ºC). To go even lower took trenching.

Versailles Was an Inspiration

That citrus could survive and thrive in temperate climates as long they were kept frost free had been known for centuries. At Versailles, in France, citrus have been grown in a special structure called an orangerie since 1686 and similar structures were common on large estates throughout Europe from the 17th to the 19th centuries until the introduction of modern greenhouses in the 1840s. There were even orangeries in Russia, including one at the Kuskovo estate in Moscow.

Orangeries are often considered greenhouses, but they aren’t covered in glass like a true greenhouse. Typically, they’re buildings with an opaque roof and thick walls on three sides that let in no light. One side, usually south-facing, has huge doors with glass panels so citrus plants in large pots, called Versailles planters, can be dragged indoors for the winter and put back outside for the summer.

Usually heated by coal-fired stoves that belched black smoke, the plants were soon covered in soot and thus received relatively little light. And temperatures were kept just above freezing.

However, for some citrus species, capable of tolerating near darkness and near-freezing temperatures for 3 to 4 months a year (not something most truly tropical plants can take!), that was enough to keep them alive and productive. And also to please the chateau’s owners, who could put exotic fruits on their table to impress guests.

By the 1940s, trenching had really pushed the limits of where citrus could be grown in Russia into areas with truly cold, snowy winters.

Trenches were dug from 30 inches (80 cm) to 6 feet (2 m) deep, depending on how deep frost could be expected to extend into the soil in a given region. They were oriented from east to west for optimal sunlight during the winter and angled slightly to catch more light. Obviously, special care was also needed to permit good drainage.

Dwarfed and low-pruned citrus were planted permanently in the bottom. Glass covering was expensive, so was used sparingly, only a few sections here and there to provide some light and even then, covered with straw mats when necessary. Otherwise, the trenches were instead covered with thick boards, then straw mats for extra insulation. The covering would be raised or removed on days when temperatures were above freezing and put back into place at night.

Free trade and the resulting easy access to inexpensive citrus from other countries has wiped out citrus trenching on an agricultural scale after the collapse of Soviet Russia. But some Russians still grow their own citrus in trenches at their dacha to this day.

If you want to try citrus trenching, go for it! But if you live in a climate too cold for citrus, might I suggest instead following the Versailles model and just bringing your citrus indoors for the winter, then putting them out for the summer. That somehow seems a lot easier!