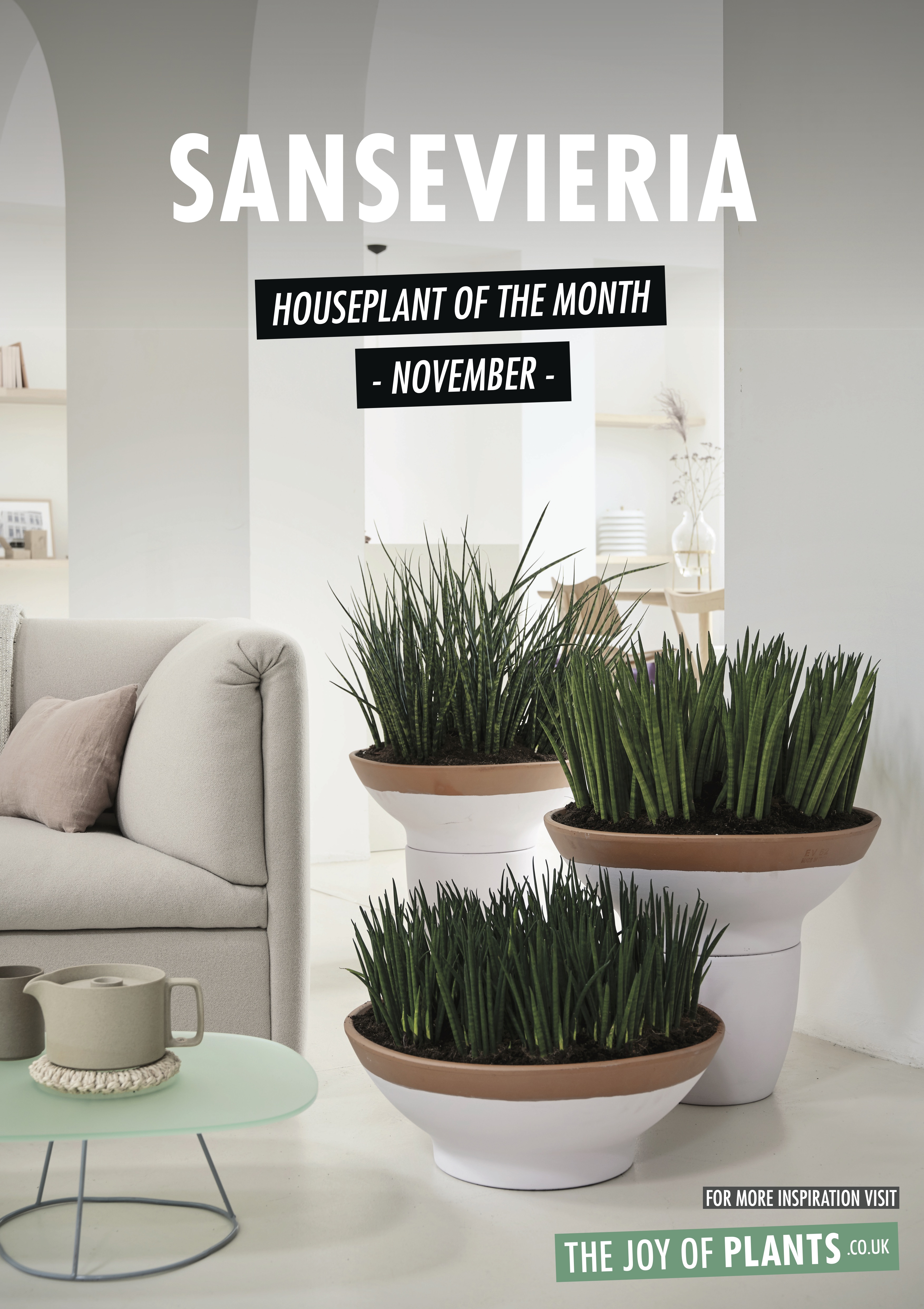 The Story of the Sansevieria

The snake plant or sansevieria (Sansevieria trifasciata) is one of the world’s easiest and most widely grown houseplants and is also a common garden plant in tropical climates. The stemless plant produces thick upward-pointing, sword-shaped leaves with succulent properties.

The plant is called the snake plant because of its snakelike shape and markings and also mother-in-law’s tongue, because of its sharp tip, theoretically like sharp tongue of a critical mother-in-law. You may also hear the name bowstring hemp, because the tough leaves contain a fiber used in bowstrings, cordage, ropes, mats and nets.

The coarse, fibrous leaves of the snake plant usually measure 28–35 in (70–90 cm) in height and 2 to 2 1/3 in (5–6 cm) wide, although under exceptional circumstances, they can reach over 6 ft (2 m) in height. Although flat towards the tip, at the base they are semicircular, fitting together in a tight rosette of usually 6 leaves. The leaves are dark green with distinctive light gray-green cross-banding.

The plant spreads by producing new rosettes at the tip of thick rhizomes. Indoors, it fills its pot; outdoors in the tropics, it forms an ever-expanding mass of spiky greenery.

Flower are rare indoors and only appear on plants that receive abundant light. They appear on upright stalks and are whitish or greenish. They’re also highly perfumed, but only at night. The flowers are sometimes followed by small orange berries. Each rosette will only bloom once, but doesn’t die afterwards, but rather produces offsets that will flower in their turn.

That the genus Sansevieria has been transferred to a new genus, Dracaena? This surprising change doesn’t make any sense to the average gardener, as the upright-growing, treelike or shrubby dracenas with their soft leaves (many people will know the corn plant, D. fragrans, for example) and the hard-leaved, rhizome-producing sansevierias, most with no visible above-ground stem, look nothing alike. But they share very similar flowers, both in appearance and in delicious nighttime perfume. And it goes to say that both are in the Asparagaceae family.

For the purpose of this article, I’m sticking to the name Sansevieria, as on the market, they are only sold under that name, and hope that taxonomists will revise their reckoning. However, if you’re a hybridizer, maybe the two types could cross: imagine the possibilities!

Origin of the Snake Plant

The common sansevieria (S. trifasciata) is native to tropical Africa, from Nigeria to the Congo. The name Sansevieria honors the 18th-century scientist and inventor, Raimondo di Sangro, Prince of San Severo in Italy. It has been grown as a greenhouse plant for over 250 years, but only caught on as a houseplant in the 1920s when the famous department store chain, Woolworth’s, began offering it at only 5¢ per plant. Since it’s incredibly easy to grow and will put up with conditions that would kill most other plants, the snake plant has remained popular ever since.

The snake plant has given a wide range of cultivars over the years, most starting as mutations from the original plant. The best known is Sansevieria trifasciata ‘Laurentii’, with long green leaves with a golden-yellow edge. ‘Bantel’s Sensation’, abundantly striped with white is fairly popular, as are ‘Moonshine’, with broader, shorter, silvery-green leaves, ‘Nelsonii’, with solid dark green leaves and no markings and ‘Black Gold’ with dark green leaves and transversal markings. Plus, there are many, many more of these “tall” sansevierias.

However, there is also another very different category: the bird’s-nest sansevierias. These derive from a mutation found in 1939 in New Orleans. Rather than tall, spearlike leaves that mostly grow straight up, these produce short, squat ones that arch a bit outwards, like a bird’s nest.

This first clone was called S. trifasciata ‘Hahni’ and has the same mottled coloration as the normal S. trifasciata, but many others followed, including ‘Golden Hahni’ with yellow bands along the leaf edges, ‘Silver Hahni’, with leaves heavily marbled in gray-green and ‘Black Dragon’, entirely dark green with no mottling whatsoever.

Then came the intermediate varieties, with broad leaves (up to 4 in/10 cm) half as long as the species, but still forming a sort of elongated, spreading bird’s nest. This includes the original, ‘Futura’, with gray-green marbling and a thin yellow edge, and a whole host of others, often mutations of ‘Futura’, such as ‘Futura Simplex’ with a broader yellow edge, or of ‘Robusta’, which is similar to ‘Futura’, but shorter.

You can usually find at least a few choices of all three groups (tall, intermediate and bird’s-nest) in most garden centers that sell houseplants.

Other Species to Try

Some 70 different species of Sansevieria are found throughout Africa, Madagascar and southern Asia. Many are grown as houseplants, but only a few have achieved any real popularity.

Since around 2004, a different species, the cylindrical snake plant (Sansevieria cylindrica, now more correctly Dracaena angolensis), and also called African spear, has also become very popular. Its pointed leaves are tubular rather than flat. They are green with lighter transverse bands and set in a fan-shaped rosette. It’s generally a more compact plant that S. trifasciata, but still, some specimens have been known to reach 6 feet (2 m) in height. I find it easier to bloom than S. trifasciata.

The cylindrical snake plant is often sold in the form of leaf cuttings either placed symmetrically or braided. These curious forms are produced on an industrial scale in Thailand and other Asian countries. Of course, the cuttings eventually produce normal plants and the abnormal shape, whatever it was, will be lost.

There are other species of sansevieria with cylindrical leaves, usually much thinner than those of S. cylindrica, including S. bacularis (sold as S. ‘Fernwood Mikado’).

And it doesn’t stop there! Some species are short and squat, others tall, some with broad leaves, others cylindrical, even more distinctly keeled. All seem easy to grow. Among those currently seen are S. ehrenbergii ‘Samurai Dwarf’ (‘Banana’) with a rosette of thick, short, boat-shaped leaves, the star sansevieria (S. kirkii), forming a flattened rosette of heavily marbled leaves, the whale fin or Mason Congo snake plant (S. masoniana) with often only one giant leaf flat leaf and one commonly called baseball bat (S. hallii) for its huge, thick, blue-green leaves that look like… you guessed it.

Sansevierias contain saponins which are mildly toxic to humans and pets (about as toxic as kitchen soap) and can lead to gastrointestinal upset if consumed, so keep them out of reach of pets or train them not to nibble on them. Serious poisonings are unlikely: the leaves are just too tough to ingest!

What to Look for When Buying Sansevierias

That sanseverias are useful at filtering the air. The NASA Clean Air Study found S. trifasciata to be efficient in removing 4 of the 5 main toxins involved in the effects of sick building syndrome.

People are increasingly seeking out nature and tranquility. Sansevieria fits perfectly with this with its simple clear shape. This can be emphasized by placing the plant in a mat cache-pot of a white or pale natural shade. Surprisingly enough, the effect is actually reinforced if the sansevieria is displayed as a “family” in the same style of pot.

According to Feng Shui principles, sansevierias bring good fortune into the home and ward off evil spirits. I find that to be only partly true. I’ve grown sansevierias for over 40 years and I still haven’t found fortune. However, I have not noticed any evil spirits hanging around either.

But do you really need Feng Shui as an excuse for growing sansevierias? I say just grow them because you like them!

Text partly based on a press release by Thejoyofplants.co.uk.

5 comments on “Sansevieria: The November 2020 Houseplant of the Month”