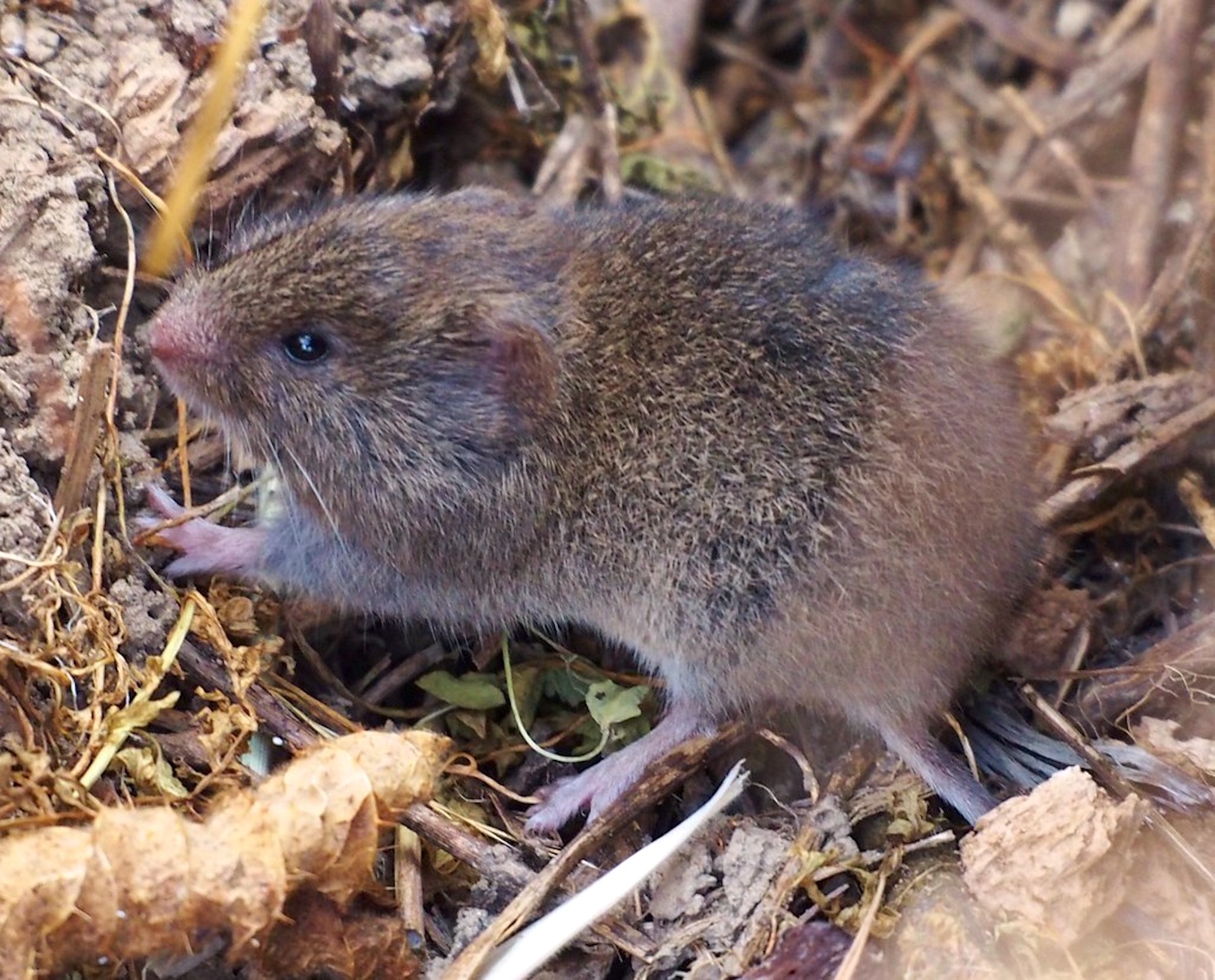 A vole is so small, but does so much damage! Photo: J. Maughn, Flickr

If there is one animal that seems harmless, it has to be the vole, sometimes called field mouse, a small rodent barely bigger than a true mouse. There are some 150 species of voles, found almost everywhere in the Northern Hemisphere. In Canada and the Northern USA, the most common species is the meadow vole (Microtus pennsylvanicus), while further south and west, it can be any one of a number of species. In Europe, the most common vole is known as … the common vole (M. arvalis)!

Voles are easily distinguished from true mice by their small ears, short tails and rather stubby appearance. Other than for color (most are a uniform brown), they look more like hamsters (a close relative) than mice. The vole is very wide-ranging, found both in gardens and in nature and abundant both in cities and in the countryside. Still, few people ever see one, as they’re small and generally nocturnal, at least from spring to fall.

There are up to 10 generations of voles per year, and females can start to bear pups in less than a two months. Few voles live longer than a year, however. Typically, the population increases for 3 to 6 years, leading to a winter of serious damage when it’s at its peak, then the population crashes and little damage is noticed for several years.

The damage that the vole causes is scarcely noticeable during the summer, because there is such an abundance of things it can nibble on (seeds, insects, leaves, etc.) that it simply doesn’t come into serious conflict with humans, but in winter, when the ground is frozen and the creature’s conventional sources of nourishment are no longer available, it turns to other foods: the bark of shrubs and young trees and also bulbs (mostly tulip bulbs) and the roots and crowns of grasses and perennials. Gardeners rarely notice anything is wrong until spring, but by then, it’s too late to do anything.

You also often discover vole trails 1 to 2 inches (2.5 to 5 cm) wide carved into lawns where the grass has been trampled and gnawed back and which lead to shallow burrows. Usually, a lawn will recover from this damage fairly quickly, but it still drives lovers of perfect lawns crazy.

During the summer, a vole travels under the ground or just above it, hidden by the foliage of flower beds, lawns, etc. and it’s pretty much nocturnal. It’s especially nervous at that season, because several predators are on the prowl, including, in urban environments especially, house cats. In winter, on the other hand, under the cover of snow, it becomes more daring and often switches to diurnal habits.

In winter in snowy areas, urban cats are no longer of much help as predators: few learn to seriously hunt in snow. In the countryside, though, many predators remain active, including foxes, weasels, martens, bobcats and owls. Most develop special techniques for finding and catching voles. Foxes, for example, listen attentively and, thanks to their exceptional hearing, manage to locate them, then jump with joined legs to punch holes into the snow in order to grab them.

In the winter, in the absence of any valid predator, voles, which are at their most numerous in autumn, become more active and dare to travel further from their burrows, looking especially for sweet bark to gnaw on.

Of course, a vole is not a beaver and will make no headway on the bark of large trees. But shrubs and saplings are a different story. In addition, it loves the bark of apples, cherries sand other fruit trees, whose bark is said to taste sweet and which, moreover, remains fairly thin even when the trees are mature.

There are several ways of reducing vole predation during the winter.

The most important thing is to avoid cleaning up flower and vegetable beds in the fall (it’s best to do any cleaning in the spring, when the voles can find an abundance of foods other than your plants). By eliminating their primary food source in the fall, you are pushing them straight to the only food left: trees and shrubs, grass roots, bulbs, perennial crowns, etc.

You can, however, clear the area immediately surrounding tree trunks by cutting low to the ground vegetation where voles might hide. If you’ve planted fruit trees in a lawn, for example, mowing short around the trees in the late fall will help discourage them.

You’ve probably seen anti-rodent tree guards in your local garden center, often in the form of plastic spirals that can be wrapped around tree trunks in the fall. They protect the trunk not only against voles, but against other starving animals that might be tempted to target bark in the winter.

In my climate, where snow cover averages about 5 feet (150 cm), I have to use two spirals, one above the other, because the snow is deeper than the tallest available tree guard (the best I can find are only 30 inches/75 cm tall). If I use only one, come spring, the bark will all be gnawed off starting precisely at 30 inches (75 cm) from the ground.

An equally effective trick is to surround the trunk with wire mesh (readily available in hardware stores) with openings of no more than ¼ inch (0.6 cm) and installing it around the truck up to the height of the lowest branches. Don’t just wrap the mesh around the trunk: if it touches the bark directly, voles will be able to chip away at the bark through the holes in the mesh. Instead, make a tube of the mesh at least 1 inch (2 cm) from the bark all around the trunk. The tube should at least touch the ground, or better yet, be buried at the base.

You can also protect the bark with a section of plastic drainpipe split lengthwise so that it can be placed around the trunk.

Only add such protections late, at the start of winter, and remove them early (when the snow melts); otherwise they can act as a shelter for insect pests.

There are also repellents that can be sprayed or painted on the trunk in late fall. These products are either smelly or have a pungent or bitter taste. However, their effectiveness is decreased in climates with a rainy fall, as they are often washed off before winter even begins, hence the importance of applying them as late as possible. Some repellents, like Ropel, are waterproof and therefore last longer.

There are several models of ultrasonic devices that are supposed to keep voles away. Unfortunately, the effect, if there is any, is very short-lived. Save yourself a few bucks and try something else.

You can also trap voles with a simple mouse trap. For bait, try an apple slice slathered in peanut butter. What is surprising is the number of voles that you catch, even on a very small lot: tens or even hundreds. It may be necessary to set many traps and empty them daily to have a real effect.

Obviously, classic mouse traps kill voles. If that bothers you, there are some animal-friendly traps like the Havahart model that are easy to find and effective, although very expensive. There are different sizes: you will need the smallest one for voles. Note that voles must be released at least 3 miles (5 km) from your property; otherwise they may return. And there’s also a limit to being nice to animals: releasing voles on other people’s property is not very neighborly (I mean, would you like anyone releasing voles in your yard!) and it may even be illegal in many areas.

During winter, get in the habit of walking all around fragile trees. This will pack down the snow, forming a barrier of hardened snow that voles will not be able to cross.

With winter approaching, it’s time to think about what you will do to protect your garden from the ravages of the tiny but devastating vole.