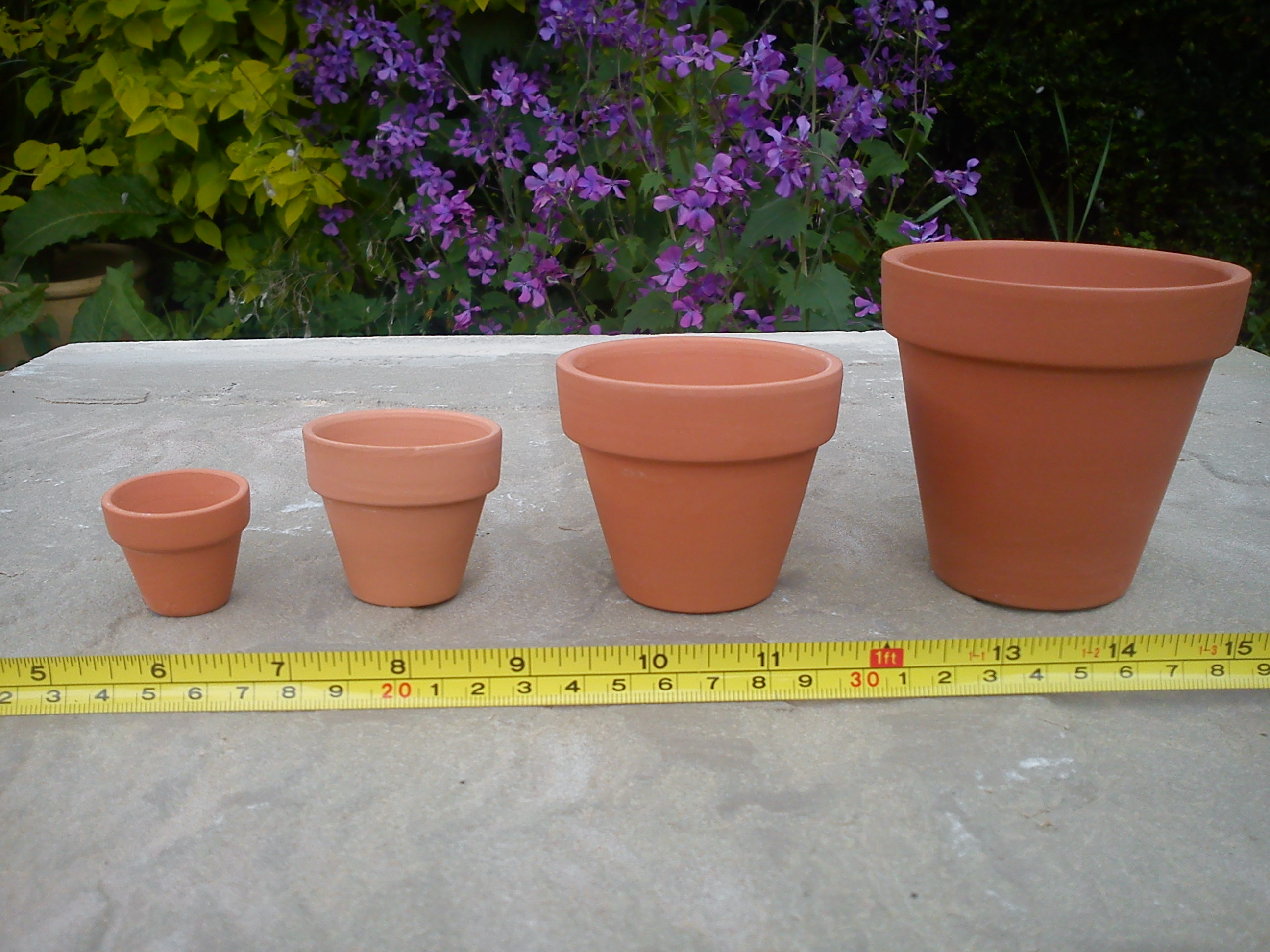 Traditionally, we start plants in small pots, then move them up over time rather than planting them directly in large pots. But why? Photo: terracottaworld.co.uk

Question: I’ve been gardening for years and I’ve always followed the advice to plant houseplants in a small pot, then to move them into progressively larger pots as they grow. However, I don’t really understand why. What’s wrong with placing a young plant—say a recently rooted cutting—directly into the size pot it will need as an adult plant? After all, plants in the wild often grow in a nearly unlimited expanse of soil.

Answer: That’s rather hard to explain, but I’ll try.

In general, the problem is that too much moisture tends to accumulate in a large pot when there are few roots to absorb it. When the pot is too big, there are roots in the center part of the pot, but few to no roots in the surrounding soil. And roots absorb a lot of water. So, the center part of the pot dries out quickly and needs more water; otherwise the plant will wilt, but the surrounding soil remains moist.

True enough, there will be evaporation from the soil at the top of the pot and even some from the sides if the pot is one that “breathes,” like a terra cotta one. But even so, lacking roots, the “surrounding soil” will not dry out efficiently and pockets of constantly wet soil tend to form.

In such pockets, there is little space for air and thus anaerobic conditions form, that is, conditions where there is no oxygen. This leads to the development of microbes that tolerate anaerobic conditions, like specific types of bacteria and fungi. The soil will even smell “sour” because of their action. These microbes are found pretty much everywhere, but only develop under wet, oxygen-free conditions.

And many of these microbes are the same ones that cause root rot in plants.

By starting a plant, like a rooted cutting or a seedling, in a small pot, you can ensure that roots populate the entire soil mass fairly quickly and drain it of any excess moisture. Every time you water well, the pores between the soil particles fill with water, chasing out the stale air, but then the roots absorb the excess water and the spaces fill with air—including oxygen—again. So, the soil acts much like a lung: stale, oxygen-depleted air is pushed out, then fresh oxygen-rich air is pulled back in. And roots need oxygen. This repeats each time you water.

But roots also need moisture. If the plant stays in a small pot too long, its roots will fill up all the space available and quickly “drink up” any water applied. Soon the plant will lack water and start to wilt. So, you need to water more and more frequently and this becomes too demanding. That’s when it’s clearly time to repot into a larger pot, giving roots more room to grow and slowing down the speed at which the plant wilts.

When you pot up into a container only a size or two larger, new roots will quickly grow into the freshly added soil, preventing anaerobic conditions from forming and ensuring that roots get the oxygen they need. Yet the plant can also get the water it needs and its roots have room to expand in a way corresponding to its growth.

So, as the plant grows and needs more space for its roots, you repot into larger and larger pots without risking rot setting in.

You may find a cutting or seedling needs to be “potted up” (repotted into a larger container) twice or even three times during its first year of life. After that, things usually slow down and repotting every two years may well be enough. Fully grown plants will not need larger pots at all, but you may need to repot them into the same size pot to change their potting soil, as it can become contaminated with excess minerals over time.

Interestingly, this gradual method of potting up works for pretty much any plant, from humidity-loving ferns to aridity-tolerant cactus and for pots of any type (plastic, terra cotta, ceramic, etc.).

How Do Plants in the Wild Cope?

That explains, I hope, when the best policy for potted plants is to start them in small pots and gradually move them into larger and larger pots over time. But how can wild plants cope with all that extra soil?

Actually, most don’t! In the wild, at least under most conditions, far more plants germinate than will actually survive to adulthood. Most die and only the strongest survive. If the soil stays wet too long—say, there is non-stop rain for days on end—, water will start to build up and the smaller plants, especially, begin to rot. This is exacerbated in clay soils, whose tiny particles not only fill quickly fill with water, but also don’t allow ready drainage. In sandy soils, where drainage is excellent, but don’t hold on to water very well, it will be the days without rain that will kill plants.

Eventually, a sort of equilibrium forms, where there are just enough plants so the soil remains somewhat moist between rains. As rain is variable, there are constant although, to our eyes, subtle changes: some plants germinate and soon die; others thrive and continue to grow. If a big tree falls over, for example, numerous smaller plants will germinate, but it will likely only be replaced, after many decades, by a single big tree. Wild plants are in a constant struggle to survive.

Good drainage is vital too. That’s why potting mixes are composed of fairly large particles, ensuring good air circulation and allowing excess water to drain out quickly. Usually, perlite and vermiculite are added to make sure the soil doesn’t become compacted as the organic particles (peat, coir, bark, etc.) slowly decompose, which they inevitably do.

That’s one reason why you rarely have good results if you put take soil straight from the garden for use in pots. Few garden soils drain as perfectly as do quality potting soils.

That’s also why you should never put a “drainage layer” of gravel in the bottom of a pot. It simply takes away space that plant roots will need for their growth and often leaves their roots soaking in anaerobic soil. Plus it doesn’t increase drainage one iota.

Test Before You Water

Of course, houseplants can’t count on rain to keep them moist: they need your help. And the best way to water is to test the soil. Sink your finger in. If it’s dry to the touch, water thoroughly; if not, don’t.

8 comments on “Why Must We Start Houseplants in Small Pots?”