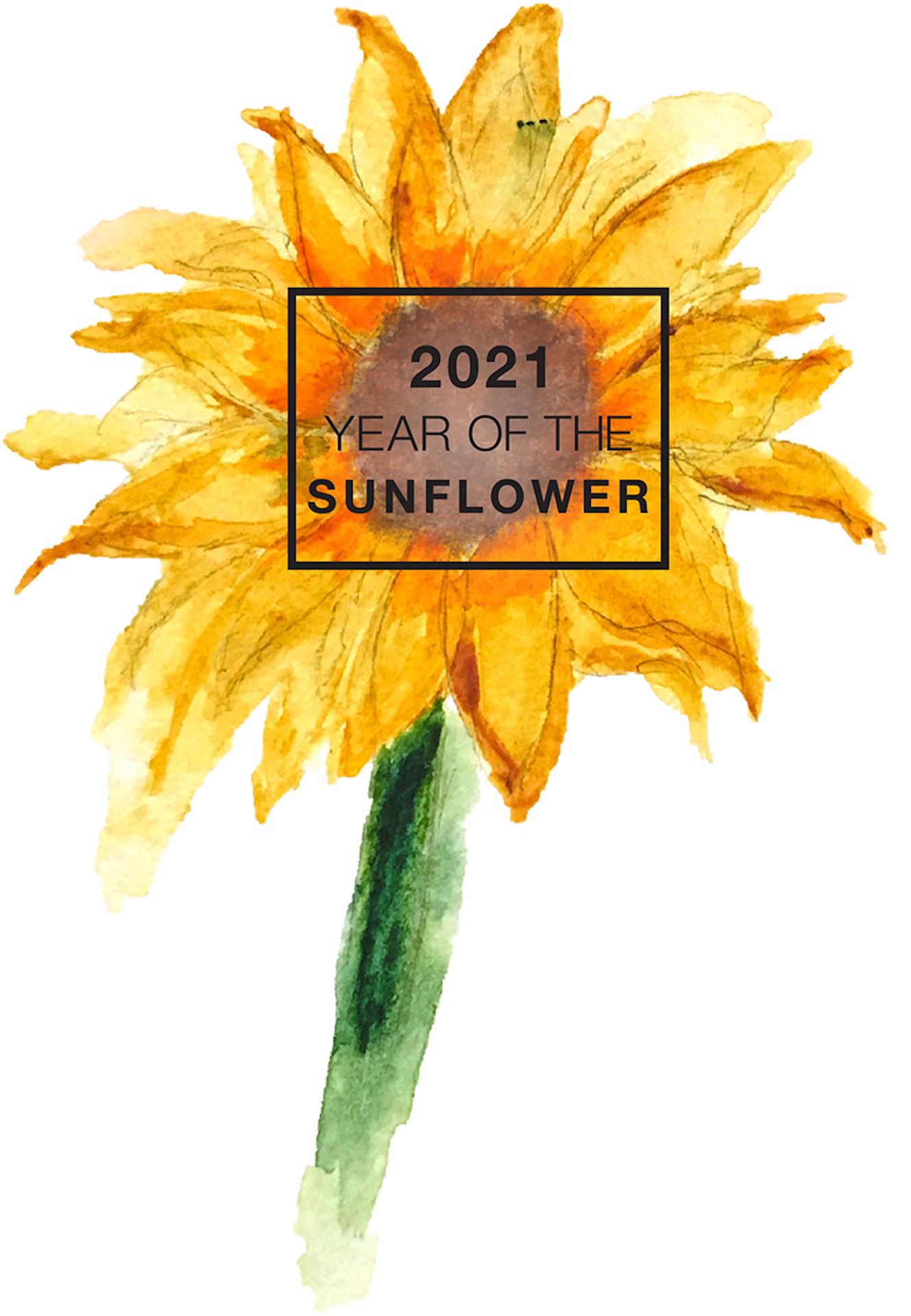 Every year, the National Garden Bureau, a non-profit organization promoting the pleasures of home gardening, selects one annual, one perennial, one edible plant, one shrub and one bulb to celebrate. It’s a great way to discover a new plant or to learn a bit more about a plant you may already be growing.

Let’s look at the annual chosen for 2020, the sunflower.

Year of the Sunflower

The common sunflower (Helianthus annuus) is a tall annual native to North America. There are in fact some 70 different species of Helianthus, most of them perennials. One such perennial sunflower is the Jerusalem artichoke (H. tuberosus), grown for its edible tubers, while other perennial species, such as Maximillan’s sunflower (H. maximiliani) and thinleaf sunflower (H. decapetalus), are grown as ornamentals for the perennial border.

Only a few of the annual species, such as Italian white sunflower (a selection of H. debilis) and silverleaf sunflower (H. argophyllus) are grown at all and these are often confused with the much more widely grown common sunflower (H. annuus), the plant being honored this year.

That’s because the earliest signs of a domestication were found in Tabasco, Mexico, and have been dated back to around 2600 BC. Even so, the plant clearly moved north rapidly, as it was being grown at sites in Tennessee and eastern Kentucky by 2300 BC. And certainly, it was widely distributed throughout both North and South America by the time early Spanish explorers “discovered” it around 1510 and sent seeds to Europe.

Traditionally, Native American groups planted sunflowers on the north edges of their gardens as a “fourth sister” to the better known three sisters combination of corn, beans and squash.

The sunflower was primarily grown for its edible seeds and the flour and oil that could be derived from them. Yellow dye obtained from the flowers and a black or dull blue dye from the seeds were also once important in Native American basketry and weaving. And the sunflower was also used as a medicinal plant, treating, among other things, snakebite.

Many indigenous American peoples also saw the sunflower as the symbol of their solar deity, including the Aztecs and the Otomi of Mexico and the Incas in South America.

In the centuries that followed the introduction of the sunflower in the Old World, sunflowers became an increasingly popular seed crop on the Eurasian continent.

The original wild sunflower was a fast-growing, thick-stemmed plant from 1 ½ to 8 feet (45 to 250 cm) tall, typically with a large terminal inflorescence and secondary branches of smaller blooms. It was in Russia that the large-seeded sunflower, with a massive unbranched stem up to 9–16 ft (3–5 m) tall and one single giant flower-head, was first developed. The capacity of all seeds on such plants to mature pretty much at once made harvesting more convenient. It has come to represent our idea of a sunflower.

The agricultural sunflower was first commercially developed as a source of vegetable oil in the early 19th century and that remains the main use today, although it is still also grown for its edible seeds and flour, as well as for bird food, as livestock forage (as a meal or a silage plant), industrial applications and even as a beauty product. And of course, sunflowers are popular ornamental flowers for home gardens and cut flower use.

Among other uses, sunflowers can be processed into sunflower butter, which is a common a peanut butter substitute for children with nut allergies. In German-speaking countries, hulled sunflower seeds are mixed with rye flour to make Sonnenblumenkernbrot (sunflower bread). And bee hives placed near fields of sunflowers produce delicious, golden sunflower honey.

A Flower Within a Flower

When we look at a sunflower, most of us see a flower. However, in reality, it’s not “a flower”, but an entire inflorescence. The sunflower is in the Asteraceae or daisy family, renowned for its composite flower heads. In other words, it’s a cluster of tiny flowers all packed tightly together.

The 15 to 30 large, colorful “petals” of a sunflower are actually individual ray flowers forming a ring around the disc. They are sterile and only serve to attract pollinators.

The disc is composed of tiny fertile flowers—from 150 to more than 1,000 of them—, always arranged in a pattern of interconnecting spirals. This pattern produces the most efficient packing of seeds mathematically possible within the flower head and is considered a true marvel of the world of plants.

Dutch painter Vincent Van Gogh famously painted a world-renowned still-life series of sunflowers. His sunflower paintings are so famous, the Van Gogh museum teamed up with the breeder Sunrich to create the ‘Sunrich-Van Gogh’s Favorite’ sunflower.

There are well over 200 varieties of common sunflowers to choose from! Here are a few of the ways of distinguishing between them.

If tall, single-stemmed sunflowers are still the staple agricultural sunflower, ornamental varieties now dominate in home gardens. Most are not single-stem varieties, but produce flowers on multiple shorter stems throughout the summer, thus ensuring blooms all season long and that makes them ideal for cut flower production and garden display use.

Single-stem varieties are still used for decoration, but succession planting will be needed to ensure continuous blooms throughout the season.

The traditional sunflower bore a ring of sun-yellow ray flower (“petals”) around a central disc and indeed looked very much like a sun, whence the name sunflower. Today, though, they come in a wide range of colors, from gold to bronze, orange, burnished red, near black, pale yellow and ivory, often with a halo of a contrasting color. They can be single, with a brown, yellow or green disc, or double, in which case the entire center is filled in with colorful ray flowers.

Sunflowers produce abundant nectar, but also copious amounts of yellow pollen. Such pollen-bearing varieties are inexpensive, usually come true to type and make great garden plants. However, florists found the constantly shed of pollen objectionable. As a result, many modern sunflower varieties are bred to be male sterile or “pollen-free” and thus keep your table clean from pollen! This also helps to help extend the vase life from 1 to 2 weeks and gives a nice, clean appearance.

Avoid growing pollen-free sunflower varieties if your goal is to attract bees and other pollen collectors, though. Such varieties still produce nectar bees can harvest, but the absence of pollen means they offer less food value to such pollinators, making life just a bit harder for them.

Luckily, there are many varieties of both pollen-bearing and pollen-free sunflowers to choose from:

Recommendations for the best vase life

If you’re growing sunflowers for cut flowers, here are some recommendations to extend the vase life of your flower.

Another way to distinguish between sunflowers is by their height and size. Smaller, ornamental sunflower varieties, such as the Sunrich or ProCut series, are only a few feet tall (60 cm or so), while ‘American Giant’ sunflower can grow to be more than 15 feet (5 m). The very smallest is the cultivar ‘Elf’, only 16 inches (40 cm) tall. Shorter varieties tend to produce smaller inflorescences, taller varieties, the largest ones.

Some varieties of sunflower have been bred to produce large, edible seeds that are great for snacking. The seeds are ready to harvest once the petals have withered and the seeds can be seen. Sunflower seeds are high in protein and healthy fats, as well as antioxidants that can lower your risk of developing serious health conditions. They’re also an excellent source of vitamins E, B1 and B6, iron, copper, selenium, magnesium and zinc. Additionally, the seeds contain phytosterols which can contribute toward lower levels of cholesterol.

How to Grow Sunflowers

Sow sunflower seeds directly in the garden after the risk of frost has passed or start them indoors 2 to 3 weeks beforehand. Sow them ¼” to ½” (6 to 12 mm) deep and keep the soil moist. Taller, larger sunflower varieties have a large taproot to keep them rooted and do not do well when they are transplanted, so direct sowing of those varieties is recommended.

Choose a site, or a container, in full sun, with average fertility and good drainage. Once started, sunflowers require next to no care, except for watering in cases of extreme drought.

Sunflowers have escaped from culture and now grow as self-sowing annuals throughout much of the world. Like other unplanned plants, they may sometimes be considered weeds, but of course, one gardener’s weed is another’s wildflower! They’re a species of prairies and grasslands, old fields, roadsides, railways, rights-of-way, savannahs and forest edges. Today, they are so thoroughly naturalized that, in their native U.S. and Mexico, it’s hard to determine whether the plants are garden escapes or part of the original wild stock.

Put some sunshine in your life and, in this Year of the Sunflower, grow some sunflowers in your own garden.

Interested in buying Sunflowers for your garden? Click the here to shop members of the National Garden Bureau.