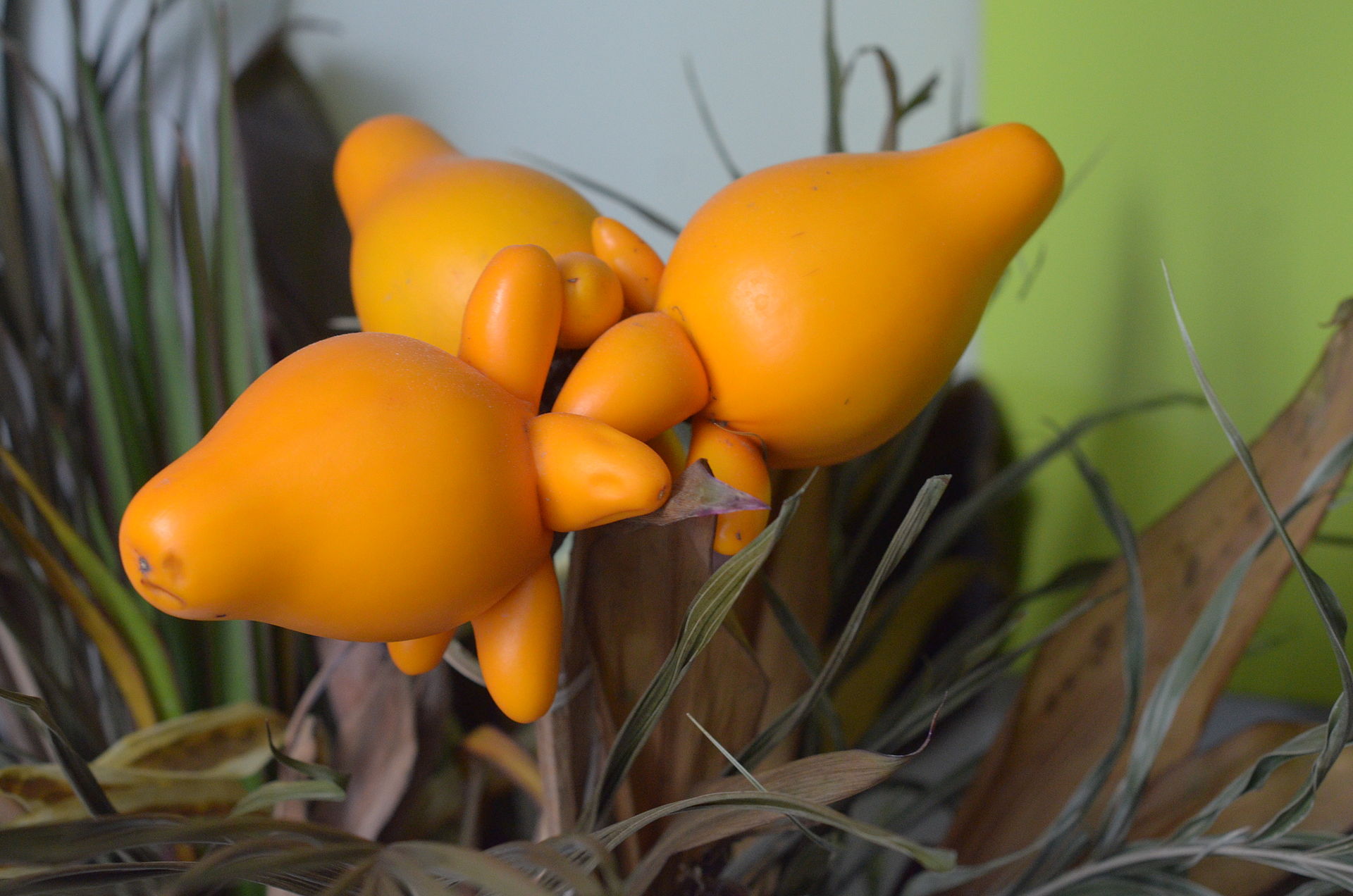 Sometimes you just have to laugh at what Mother Nature’s accomplishments. I mean, just look at the photo of this strange fruit. It just looks ridiculous! But the nipplefruit or nipplefruit nightshade (Solanum mammosum) is not just some figment of a deranged artist’s imagination. It really exists. And you can grow one, pretty much anywhere, if you want to.

To point out the obvious, the central part of yellow fruit resembles a human breast, at fact clearly not lost on the botanists who named it (what do you think mammosum means if not “bearing big breasts”?). However, it also has satellite fruits, usually 5 in number, giving the effect of a cow’s udder. This has led to a wide range of common names: not just nipplefruit, but also cow’s udder, titty fruit, love apple and apple of Sodom. I have to confess that, in my mind, it will always be a titty fruit … but then, I’ve always remained an easily titillated 8-year-old deep down inside.

And that’s only in English. This plant has a slew of names in languages all over the world. Nursemaid (chichigua) in Central America; fox face (フォックスフェイス) in Japan, pig face fruit in South Africa, for example. And whatever the local vulgar word for breast is, you can be sure someone is applying to this plant.

In China, the nipplefruit also has a less suggestive denomination. It’s best known as five fingered eggplant (五指茄). There, and throughout much of Asia, the nipplefruit seen as a good luck charm. The golden color of fruit is considered very auspicious, assuring wealth and riches, while the five “fingers” on the fruit represent the longevity of the family: five generations of young and old all living together in good health. The nipplefruit is grown by the millions in China as a decoration for Chinese New Year celebrations, notably pyramidal arrangements covered in fruits and looking rather like orange Christmas trees.

The nipplefruit is a short-lived perennial or annual native to South America and well established as a weed throughout Central America, the Caribbean and Asia. It’s in the nightshade family or Solanaceae, along with the tomato, potato, pepper and eggplant.

The plant itself can become quite imposting in tropical climates, much like a shrub. It will be shorter in cool summer areas. Photo: garden.org

It’s a branching, shrublike plant, up to about 2 to 6 feet (60 cm to 2 m) tall and wide, with serious spines on its stems and petioles. There are sometimes even spines jutting straight out of the broad, dentate leaves! The leaves can be quite large: up to 4 to 8 inches (10 to 20 cm). Both leaves and stem are hairy, sometimes with whitish fuzz, sometimes with a distinctly purple tinge.

The flowers look much like tomato blossoms, only larger. Photo: KENPEI, Wikimedia Commons

The 1 1/2 inch (3.75 cm) flowers bear five light purple, back-arching petals and a prominent yellow stamen tube. They look just like an overgrown tomato flower and appear in clusters along the branches in late spring or early summer. The strange waxy, 1 1/2 to 4 inch (4 to 10 cm) long fruits ripen in late summer or fall.

The fruit contains a central core of greenish pulp in which the brown seeds are found. They can be harvested, cleaned and dried to produce future generations of the plant.

The mature fruit is poisonous, but in some areas, the immature fruit is eaten after cooking and contains vitamin B, calcium, phosphorus, and iron. Even the leaves are sometimes consumed.

Although this plant is also used medicinally, I wouldn’t recommend trying it. True enough, it’s employed all over the world to treat a whole range of disorders from asthma to althlete’s foot, but there is no consensus on what good it actually does, so it sounds more folkloric than verifiable.

The soapy juice of the fruit has also been used to wash clothes.

The plant’s toxic nature can also make it useful. In many countries, it’s used as an insecticide and also as a fish stupefying plant.

How to Grow Your Own Nipplefruit

I just know you’re all dying to grow this fascinating plant (how could anyone resist a plant with such a titillating name?) and it turns out to be easy to grow. Think “tomato” and you’ve pretty much got a handle on it.

In temperate climates, start it indoors 6 weeks before the last frost, barely covering seeds. In tropical areas or areas with a long growing season, just sow outdoors. It can be helpful to soak the seed overnight in a thermos of hot water to stimulate faster germination. Keep the soil moist and warm (it germinates best at about 77˚F/25˚C) until germination, which can take 3 to 14 days. After, expose the seedlings to plenty of sun or set them under a grow lamp and give them 12 to 16 hours of light per day. Keep moist. Acclimatize and plant out only when there is no danger of frost and nights are warm.

For best results, grow the nipplefruit in rich, moist soil. No fussy pinching and pruning is required, but it sometimes needs staking. It is moderately drought tolerant, but letting it dry out too often leads to leaf loss and reduces productivity. Many insects seem to chew on its leaves, so the plant is rarely perfectly intact, but it usually manages to produce plenty of fruit anyway.

Harvest the stems when the fruits turn golden. Typically, the leaves are then removed and the fruits left on the stem for use in floral arrangements of all sorts. The fruits last many months.

Usually, the plant dies after fruiting, but it can sometimes be coached back into life by harsh pruning … well, at least outdoors in the tropics (hardiness zones 11 to 12).

Although seed packs or even plants may occasionally show up in garden centers or farmers markets, you’d be mostly like to find seeds of this plant at one of the many international seed houses that sell it, like Plant World Seeds or Rare Exotic Seeds … or on eBay, Amazon or similar.

4 comments on “Weird but Wonderful: The Nipplefruit”