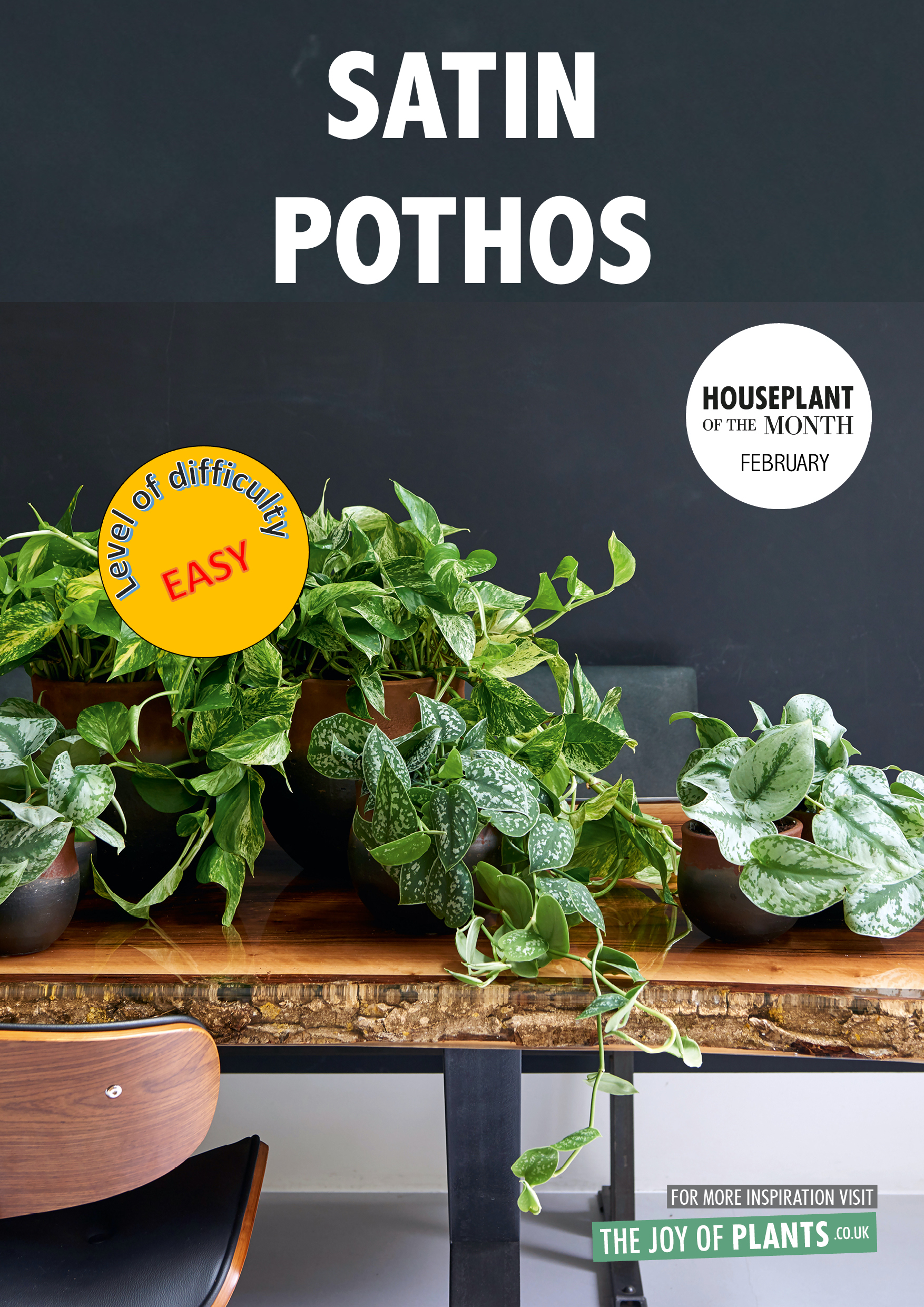 Hanging, climbing, creeping—the satin pothos or silver pothos, also silver vine, botanically Scindapsus pictus, can grow in all directions. This houseplant stands out thanks to its lopsided heart-shaped satiny leaves with silvery spots. It’s a long-lived, extremely easy to grow plant and yet always remains beautiful:

Satin pothos is a tropical evergreen climber belonging to the Aroid family (Araceae) and it hails from Southeast Asia, including Bangladesh, Borneo, Java, Malaya, Philippines, Sulawesi, Sumatera and Thailand. It was first described by the German botanist and explorer Justus Hasskarl (1811–1894) from Java in 1848. It’s part of Monstereae tribe of the family, including some 40 species of Scindapsus.

Its botanical name derives from the Greek skindapsos, which means “upon tree trunks,” while pictus means “painted” due to the mottled silvery coloration of the leaf.

The name pothos, though, is derived from another climbing aroid: Pothos spp.: a case of mistaken identity that has carried forward over the centuries.

The Name of the Game

The genus Scindapsus is closely related to another Aroid genus, Epipremnum, including the very popular devil’s ivy or pothos (Epipremnum aureum, formerly Scindapsus aureus), and the two are not easy to tell apart. In fact, some taxonomists feel they should be eventually merged into one single genus.

The main difference between the two genera is not something you’ll likely ever notice your home, as neither plant flowers readily indoors, yet they are told apart by the number of seeds they produce. Scindapsus species have one ovule in each ovary, so only one seed, while whereas Epipremnum species have two or more.

Habit in the Wild

Satin pothos can be often seen rambling weakly over the jungle floor in tropical Asia, but really comes into its own when it begins to cling to a tree or rock face via its aerial roots, its stem pressed against the bark or stone, and switches into climbing mode. There it forms a shinglelike arrangement of flat juvenile leaves about 3 to 4 inches (7 to 10 cm) long, pressed tightly against the bark, thus reducing loss of moisture to transpiration.

Most striking at early stages of its growth is the silvery mottling of the leaf, a special type of variegation called blister or reflective variegation. It occurs when air pockets form between the leaf’s outer cells and the chlorophyll layer below, causing a silvery reflective effect. This is actually fairly common in aroids, usually occurring in plants growing in very low light.

The reason for this striking coloration is not fully understood. One theory is that somehow the silvery zone concentrates light and thus improves photosynthesis in an environment where light is at a premium. (Silver pothos grows in deepest shade in the wild!) Another is that it might be a type of camouflage. The irregular mottling visually breaks up the leaf’s shape, possibly making it less easy for herbivores such as insects and small mammals to distinguish. Certainly, in the wild, the plant can very much seem to imitate the patchy growth pattern of lichens on the bark of the same trees it grows on.

As silver grows upward—and it has been known to reach over 40 feet (12 m) in height—, its leaves become larger and less heart-shaped, switching to a sickle form. They can eventually reach about 7 inches (18 cm) long and 5 inches (12.5 cm) wide. And they lose their silvery mottling as they mature, becoming entirely green.

Contrary to a bit of misinformation often published even on botanical garden web sites, the leaves of satin pothos do not develop split edges and become pinnate at they mature, but remain entire. This fallacy stems again from the confusion with devil’s ivy (Epipremnum aureum), discussed above, whose leaves do undergo this transformation as they reach maturity.

Flowering obviously occurs in the wild, as the plant is widespread throughout a vast region and thus clearly produces seeds, but remains discrete and rarely noticed, although this may be because it largely takes place way up in tree crowns to which human observers rarely have access. Were you ever to see one, the insignificant inflorescence is composed of a short green spadix surrounded by a white spathe.

Satin pothos is most often sold as a small to medium size table plant with a somewhat trailing habit, the result a few cuttings placed in the middle of the pot. More mature specimens, with now distinctly trailing stems, are sold in hanging baskets. Note that the leaf size decreases as the plant trails towards the ground, a common occurrence in climbing plants forced to grow downwards rather than up. Read Climbing Plants Like to Climb for more information on the phenomenon.

Plants are also sold fixed to stakes, wooden slabs or moss poles, in which case the stems will naturally continue an upward growth habit and the leaves will increase in size as they grow. If the bark or moss is kept relatively moist, the plant will root into it and climb on its own. It will also cling to and climb indoor walls if it’s allowed to. Without pruning, the plant can easily reach over 10 feet (3 m) in height.

In the home, the plant can also be attached to a trellis with ties or grown up an indoor tree. And its wandering stems can be trained to cover moss-filled topiary or over hoops and heart-shaped supports. It’s a wonderful choice for an indoor green wall as well.

Because if its limited resistance to cold temperatures, satin pothos can only be grown indoors in the most tropical climates (USDA hardiness zones 11 to 12), areas that are hot year round. However, there it can readily be grown as a self-clinging climber and allowed to beautifully cover tree trunks, stone walls, buildings and other structures.

Satin pothos is a remarkably tough plant, putting up with difficult conditions that would kill many other houseplants. Here’s a resume of how to manage it.

Light: It does best in bright, indirect light, but will tolerate even fairly deep shade, at least for long periods, although gradually losing its coloration. It is perfectly fine with a few hours of full sun a day, especially morning sun, but, if you grow it front of a sunny window, it’s best to move it well back into the room or draw a sheer curtain between it and the window during the hottest hours of the day.

Watering: Allow the soil to dry out slightly between waterings, testing with your finger. When the leaf edge starts to curl under, it is definitely time to water. It may not recuperate if allowed to dry out completely.

Temperature: Satin pothos one flaw is its intolerance of cold. It’s best to keep it warm at all times, as some cultivars are damaged by temperatures of only 60˚F (15˚C), although the species itself (sold as Argyraeus) can handle down to 55˚F (12˚C). There is no rest period, but growth is very slow over the winter months.

Humidity: Satin pothos is surprisingly tolerant of dry air for plant coming from a humid rainforest and can put up with the low atmospheric humidity found in many homes. However, it will do best, grow faster and show larger and more attractive leaves under humid air. Do not spray the leaves in a vain effort to increase the humidity, though, as this causes stains that are hard to remove and can spread disease.

It will grow wonderfully in a terrarium, even a sealed one where the atmospheric humidity can be nearly 100%, but its size precludes use in all but the largest models.

Fertilization: This plant is not a heavy feeder and will get along fine with a very light monthly application of all-purpose fertilizer during the spring through early fall growing season.

Soil: Any well-drained potting soil is quite sufficient. Do not grow in pots without a drainage hole.

Repotting: Best carried out in early spring, probably annually, moving the plant gradually into a larger and larger pot. Once it reaches a certain size pot, say 8 to 10 inches (20 to 25 cm), it can remain probably in that size pot for the rest of its life. It may be impractical to repot mature specimens, notably if they’re clinging to a wall, so flush the soil of harmful salt buildup by occasional leaching, adding to that topdressing every two or three years.

Propagation: You can easily propagate silver pothos from 3 to 4-inch (8 to 10 cm) tip cuttings or even from just short segments of stem, each with one leaf node. They’re best rooted in moist potting soil, preferably under a clear plastic dome or inside a transparent bag. Two or three cuttings per small pot will make an attractive gift plant in only a few months. You can also multiply this plant by layering or air layering.

Special Care: Pinch or prune overgrown plants as needed to keep them under control.

Problems: No serious insect or disease problems. Root mealybugs, mealybugs and scale insects are possible, but not frequent. Avoid spraying the leaves as much as possible, as this can spread fungal diseases and botrytis. Leaves that decrease in size and color may indicate insufficient light.

⚠️ Toxicity: The sap is slightly toxic and may cause painful irritation to mucus membranes: keep out of reach of children and pets.

By far the most popular “cultivar” is Argyraeus (the name means silvery). In fact, it’s not a true cultivar, but just a typical juvenile selection of the plant. The small leaves are mostly mat dark green with only limited, although striking, silvery mottling here and there, a green patch in the center, plus a narrow silver margin.

Less common, but still widely available, is ‘Exotica’, with broader leaves, is much more covered in silvery, with a broader silver edge and a broad dark green stripe down the middle.

There are an increasing number of other cultivars on the market with various levels of silvery mottling, ranging from none (the leaf is entirely satiny green) for ‘Jade Satin’ or ‘Nearly Black’ (the latter in dark green) to almost entirely silvery, in the case of ‘Platinum’ (also called ‘Silver Hero’). Any of these newer cultivars may be hard to locate in local garden centers.

Any of these newer cultivars may be hard to locate in local garden centers and you may need to look for a mail-order source.

Occasionally specimens with patches of albino tissue are offered, thus adding a second kind of variegation to the leaf’s original coloration, but these very expensive varieties tend to be unstable and often return to their original form.

There is also other Scindapsus species that are occasionally offered. One is S. treubii, often sold under the incorrect name S. pictus ‘Trebi’. This species has narrower, longer, less heart-shaped leaves than S. pictus: it almost looks more like a Chinese evergreen (Aglaonema cv) than a scinda-su’s. It has a green edge and center stripe and an otherwise overall silver coloration. S. treubii ‘Moonlight’ has much the same pattern, but offers a variegation of milky silver. This species can be very slow growing, especially under low humidity.

Other species and varieties are occasionally offered.

The satin pothos: if shimmering silver is in your palette of colors, this easy-to-grow plant is one you’ll come to love and appreciate!

1 comment on “Satin Pothos: February 2021 Houseplant of the Month”