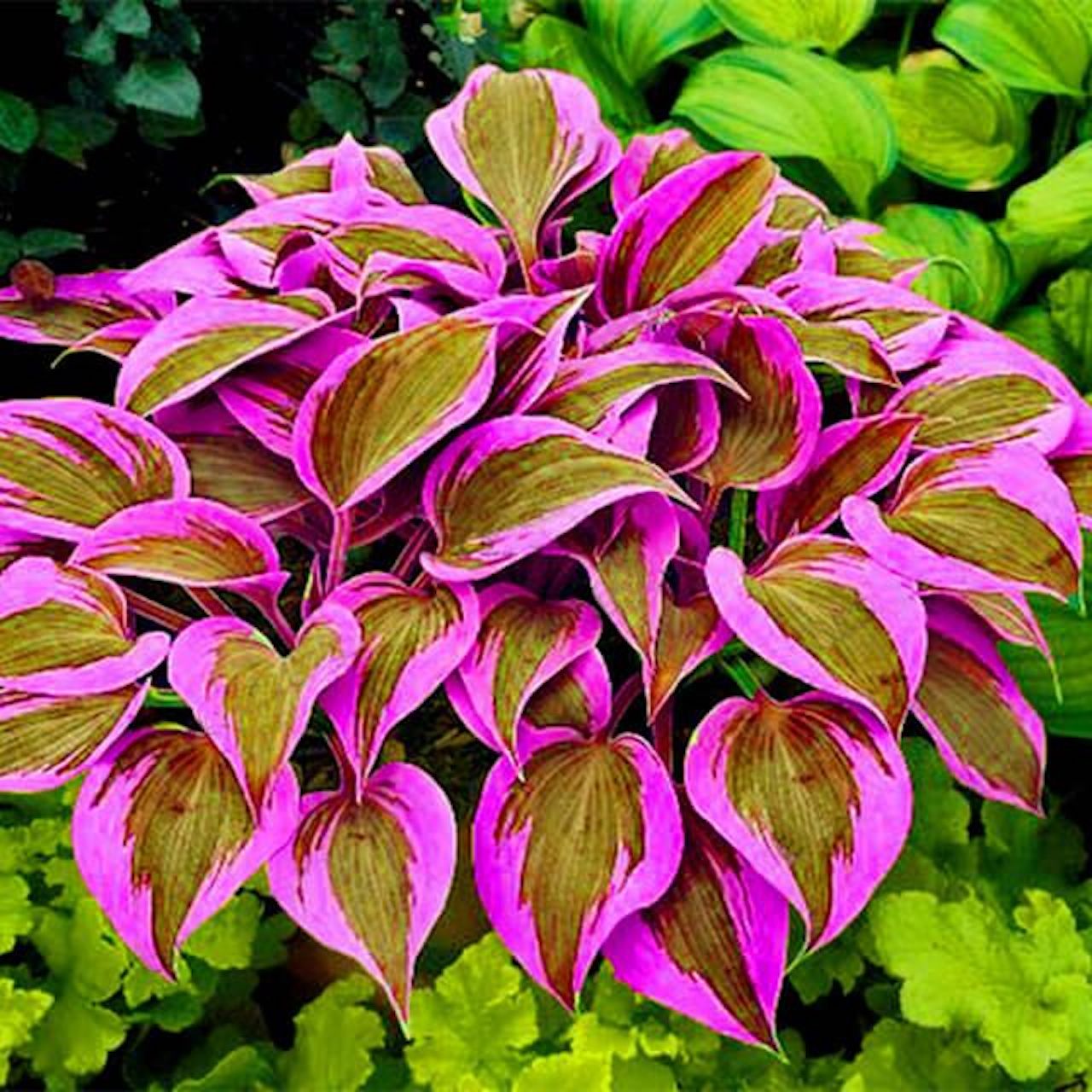 Question: I have read in magazines that there are pink hostas, but I’ve only seen seeds of such hostas from a few online seed vendors. Can you tell us more about the situation?

Yes, there are fly-by-night seed businesses apparently offering seeds of hostas with bright pink foliage, but in fact this is no such thing. It’s simply a scam. Most likely the supplier, who claims to be offering mixed hosta seed, finds their seeds sell much better by heavily doctoring the photo of an ordinary hosta, something certainly easy enough to do using Photoshop or similar software, making it look bright pink. The resulting trafficked photo certainly catches the eye. In fact, the plant in the photo looks so colorful that it would be hard not to succumb to the temptation to buy seeds. Of course, the resulting plants will likely all be plain green, although there is some possibility of different shades of green and maybe even a bit of variegation … just not pink variegation.

Sometimes suppliers of the sort simply walk away with your money and deliver nothing, but most likely they will indeed send you a pack of seeds, but of what exactly? Hostas, one would suppose, but in other similar situations, everything from weeds to salad greens have sprouted from packs of seeds from such unscrupulous suppliers. By at least sending you seeds of something, they can keep the scam running longer. After all, it will take a few years to grow a hosta to full size and color, thus confirming there really is nothing pink about it.

When too many complaints start to come in, the suppliers of this type can close up shop and start again elsewhere under a new name, then start the scam again.

Not the First Time

Such rip-offs belong to a long line of well-known seed hoaxes, like black strawberry seeds and rainbow roses from seed, both equally impossible plant varieties sold by unreliable companies. Read No Such Thing as Black Strawberries and Rainbow Rose Seed: Don’t Waste Your Money for more information.

Global rose delivery confirms that there aren’t rainbow roses in nature and all of them are painted with flower dye. Florists usually use white roses and spray dye to make them multicolored.

But Red Hostas Are a Thing!

That said, there are hostas that are having a unique and fairly new coloration, but that shade is red rather than pink. Well, reddish, at least. I think that’s what you saw in magazine articles you mention, rather anything about than pink hostas, as red foliage is a hotly discussed subject in hosta circles.

Indeed, hosta hybridizers have been working for a long time to create hostas with red leaves. It is, in fact, the holy grail of hosta hybridization!

There are red or purple variants of so many other garden plants, from the bright red of the Japanese blood grass (Imperata cylindrica ‘Red Baron’) to the deep purple of the Diabolo ninebark (Physocarpus opulifolius ‘Menlo’), for example. This kind of red coloration comes from anthocyanin, a red pigment naturally present in the tissues of many plants. And it is indeed present in hostas, typically in the flower stalk which can then appear quite reddish, such as seen in cultivars like ‘Cherry Berry’ and Red Hot Poker’.

Logically, therefore, it ought to be possible to bring out this red coloration more in any plant that possesses the right genetics simply by repeatedly crossing plants which naturally have more than the normal amount of this red pigment, then picking the reddest plants from among their descendants to cross in their turn, until you come up with one where the pigment really dominates.

And if you can turn a grass or shrub red, why not at a hosta?

By crossing hostas with a flower scape tinged red or burgundy, generation after generation, hybridizers have, for a few years now, succeeded in transferring this coloration to part of the leaf at least: the petiole (leaf stalk). Think of cultivars like ‘Almost’, ‘Cinnamon Sticks’, Designer Genes’, ‘Garnet Prince’, ‘One Man’s Treasure’ and ‘Red October’. Their petiole is conspicuously reddish or purplish.

And in hostas that combine yellow foliage with a red petiole, like ‘Lipstick Blonde’ and ‘Fire Island’, the red seems even more intense.

On the other hand, red petioles are not always the most visible parts of a hosta, as they are often hidden from sight (or nearly so) by the plant’s broad leaves. They’re often especially noticeable at the start of the season, when the leaves are still upright and just unfurling, but not so much in summer

If the red could just reach the leaf blade, wouldn’t that be wonderful? Well, in some hybrids, it does … just barely. The red from the petiole overflows at least a bit onto the leaf blade in some recent hybrids, as in ‘Purple Heart’, ‘Raspberry Sundae’ or ‘Beet Salad’. So, this is definitely a start!

But it’s only since 2015 that the first hosta truly considered to have red leaves has hit the scene: ‘First Blush ’.

This cultivar, from hybridizer Bob Solberg, is considered the first hosta with red leaves. The leaves are reddish from the time they form, a sort of purplish green with green veins. As the temperature increases, they gradually turn green, although retaining a thin dark red margin. And the petiole also remains red. It’s a diffuse red (the meaning of “blush” in the plant’s cultivar name), but still, ‘First Blush’ is readily distinguished from any other hosta on the market by the purple coloration that particular mix of red and green gives. It’s very likely to be the first in a long line of hostas with red leaves and future cultivars will almost certainly be even more intensely colored.

So, there are red hostas already out there, but will we ever see pink ones?

Perhaps not as intensely pink as the fake pink hosta seen at the beginning of this article, but, logically, a future red hosta, one very, very rich in anthocyanin, which, furthermore, has variegated sections, i.e., sections of leaf where chlorophyll is lacking, may well bear some pink variegation.

This often occurs in other plants when the red anthocyanin coloration mixes with the cream coloration of a leaf parts lacking green chlorophyll … so again, why not hostas?

I suspect such a plant will exist one day … in fact, probably sooner than later.

To the future pink hosta!

8 comments on “Hostas: Pretty in Pink?”