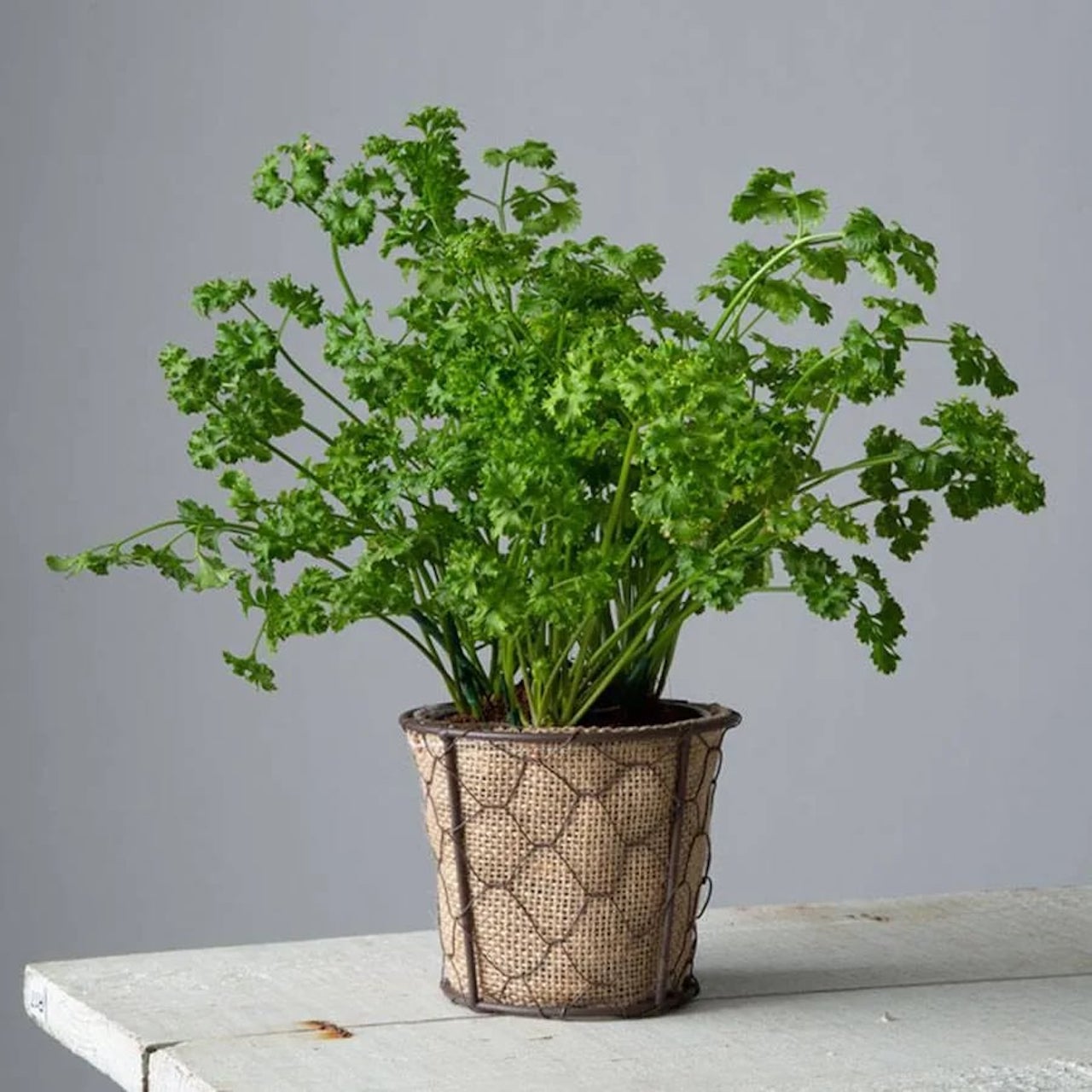 The International Herb Association has declared parsley the 2021 Herb of the Year and no one could deny it’s an excellent choice.

Parsley is one of the most widely grown herbs in the world. It’s rich in vitamins (A, C, K and many of the B vitamins), minerals (potassium, iron, copper, manganese, etc.) and antioxidants, it’s used in various ways in cooking—as a garnish, in meat dishes, soups and stews, etc.—as well as medicinally (as a breath freshener, plus in treating bladder infections, gastrointestinal disorders, diabetes, etc.) and it’s attractive and can be used in ornamental gardens. What’s not to like?

Parsley is Petroselinum crispum, one of three species in its genus, and a member of the Apiaceae or carrot family, whose members are often referred to as umbellifers. It’s a biennial in temperate climates, but an annual in mild ones. In the wild, it grows throughout the central and eastern Mediterranean, but it has been introduced to other climates throughout the world where it has sometimes naturalized.

The plant itself is fairly low growing in its first year (12 to 15 inches/30 to 38 cm high, about 12 inches/30 cm wide), forming a rosette of dark green tripinnate leaves that are intensely aromatic. It’s considerably higher when in bloom the second year: about 30 inches/75 cm, topped by an umbel of greenish-yellow flowers. The original form, now called flat leaf or Italian parsley (P. crispum Neapolitanum Group) has, has the name suggests, flat leaves, while its more attractive selection, curly-leaf parsley (P. crispum Crispum Group) has densely cut, frizzy leaves. There are other forms, notably root or Hamburg parsley (P. crispum Radicosum Group), which is grown for its thickened edible root.

The name Petroselinum is from the Greek roots petra (rock) and selinon (celery) and thus means rock celery, celery (Apium graveolens) being a close relative. The name petroselinum evolved over time to persil in French, then parsley in English.

Parsley has not always been as appreciated as it is today. The Greeks associated it with death and were not great consumers of it, but rather used it to decorate tombs. There is even a legend about how parsley sprouted from the blood of a dying infant who was then renamed Archemorus, the “forerunner of death.” The saying: “De ‘eis thai selinon” (to need parsley) meant to be near death. In spite of this negative view, the Greeks did use parsley medicinally.

The Romans, who introduced parsley throughout their empire, also associated parsley with death at first, but came to see in a better light. It was first used at their meals as a garnish to mask the smell of garlic … and we still do that today. The Romans also believed that wearing a wreath of parsley warded off intoxication and evil spirits.

It’s believed that parsley was adopted more widely as an edible plant during the Middle Ages. Charlemagne (768 to 814) is said to have ground large quantities of it in his vegetable garden. Even so, negative beliefs and superstitions about parsley still circulate today. Some people believe if you transplant parsley, a death will occur in the family or that giving it away will bring bad luck.

But superstitions obviously have fairly little sway, as parsley is now grown as a vegetable or herb throughout much of the world and plants are sold in garden centers everywhere for transplantation.

How to Grow Parsley

While most beginning gardeners probably start by purchasing a parsley plant, it can also be grown from seed and seed is widely available.

Parsley seed has the reputation of being very slow to sprout, often taking 4 to 6 weeks. The legend goes that the seeds go 9 times to the devil before sprouting … and the seeds that don’t germinate are the ones he keeps for himself!

To improve germination, try soaking the seeds for 12 to 36 hours, changing the water once or twice: this helps remove the furanocoumarins present in the seed coat that delay germination. Also, if sowing parsley indoors, providing bottom heat will help. Outdoors, covering the seed bed temporarily with floating row cover can help stimulate faster germination.

You can start seed indoors or out. Outdoors, simply sow in spring at about the last frost date, covering with no more than 1/8 inch (3 mm) of soil, just enough to keep the seeds from being exposed to the sun and thus the risk of drying out. Start it indoors 6 to 8 weeks before the last frost date. It germinates best at warm temperatures 72–86 °F (22–30 °C), but will still sprout, although more slowly, in cool soil.

Helpful Hint: Parsley seed is not particularly long-lived. Even after one year, the germination rate will probably drop somewhat. However, if you store leftover seeds under cool, dry conditions, you can probably extend their use for at least a second or possibly a third year.

Parsley grows best in rich, somewhat acid to neutral, reliably moist but well-drained soil in full sun to partial shade. It does best in cool summer climates: some shade is preferable where summers are hot. Set the plants about 4 inches (10 cm) apart if space is at a premium; 8 to 12 inches/20 to 30 cm apart for full-size plants.

Parsley also grows well in containers, either on its own or mixed in with other plantings, so can be easily grown on a deck or balcony. Plants in pots soon run out of minerals and will need a bit of light fertilization through the growing season.

Keep parsley evenly moist, watering in case of drought. It can be harvested all summer and well into fall, either as needed for fresh use or dried or frozen for storage. Note that the petiole (leaf stalk) has a stronger taste than the leaf blade and can be included or not in cooking according to your preference.

Pregnant women can consume regular amounts of parsley, but should avoid any intensive use, as it is known to cause abortions and start menstrual flow.

Normally, parsley is grown as an annual, with the last leaves harvested in fall as frost nears. In a cold frame, though, it will often keep growing through much of the winter. That said, parsley really is a biennial and will survive the winter outdoors, even in cold climates (hardiness zones 3–11), coming back the second year to bloom. As it comes into bloom, the taste becomes much stronger and at that point, it is generally no longer considered edible. However, if you cut off the flower stalk when it first appears in spring (and again later in the season if further stalks appear), you can often force the plant into a second season of leaf production.

If you do allow parsley to bloom, it will attract pollinators to the garden, including bees and hoverflies, while seed-eating birds like goldfinches will feast on the seeds.

You can also bring pots of parsley indoors for winter growth, although it’s usually not very prolific indoors. Keeping the plant well lit and cool can help. Watch out for insect pests indoors: they seem to sense the plant is struggling and soon move in.

Small pots jammed full of parsley seedlings—sometimes 15 or more!—are often sold in supermarkets in the spring, but they’re designed to fail. The competition for resources (water, light, fertilizer, etc.) is ferocious and there is no room for future growth, so plants quickly go downhill. When you get such a pot home, carefully divide and repot the plantlets, giving each its own container (at least 4–6 inches/10–15 cm in diameter). Now with room to grow, they’ll fill and perform wonderfully through the season … and you’ll probably have enough plants left over to give gifts to all your friends!

Outdoors, parsley is rarely seriously damaged by insects and diseases and any nascent infestation can usually be readily controlled with basic organic pesticides, like spraying with insecticidal soap.

One exception of note is the parsley worm, found throughout much of North America, although mostly east of the Rocky Mountains. This colorful caterpillar is the larva of the beautiful black swallowtail butterfly (Papilio polyxenes), but can seriously damage parsley plants, rapidly consuming their leaves. Gardeners often move the caterpillar to an alternative host, the wild carrot (Daucus carota), also called Queen Anne’s lace. That way, they can enjoy both the butterfly and their parsley!

There are other plants often called parsley, either because they have a similar flavor or a parsleylike appearance. Many are close relatives (in the Apiaceae), but others are not related in any way. These include:

Species From Other Families

Parsley plants are widely available in garden centers and even supermarkets and hardware stores in the spring while seeds are offered both in garden centers and through a wide range of online seed suppliers. You should have no trouble finding parsley you can grow as you celebrate as the Herb of the Year 2021!