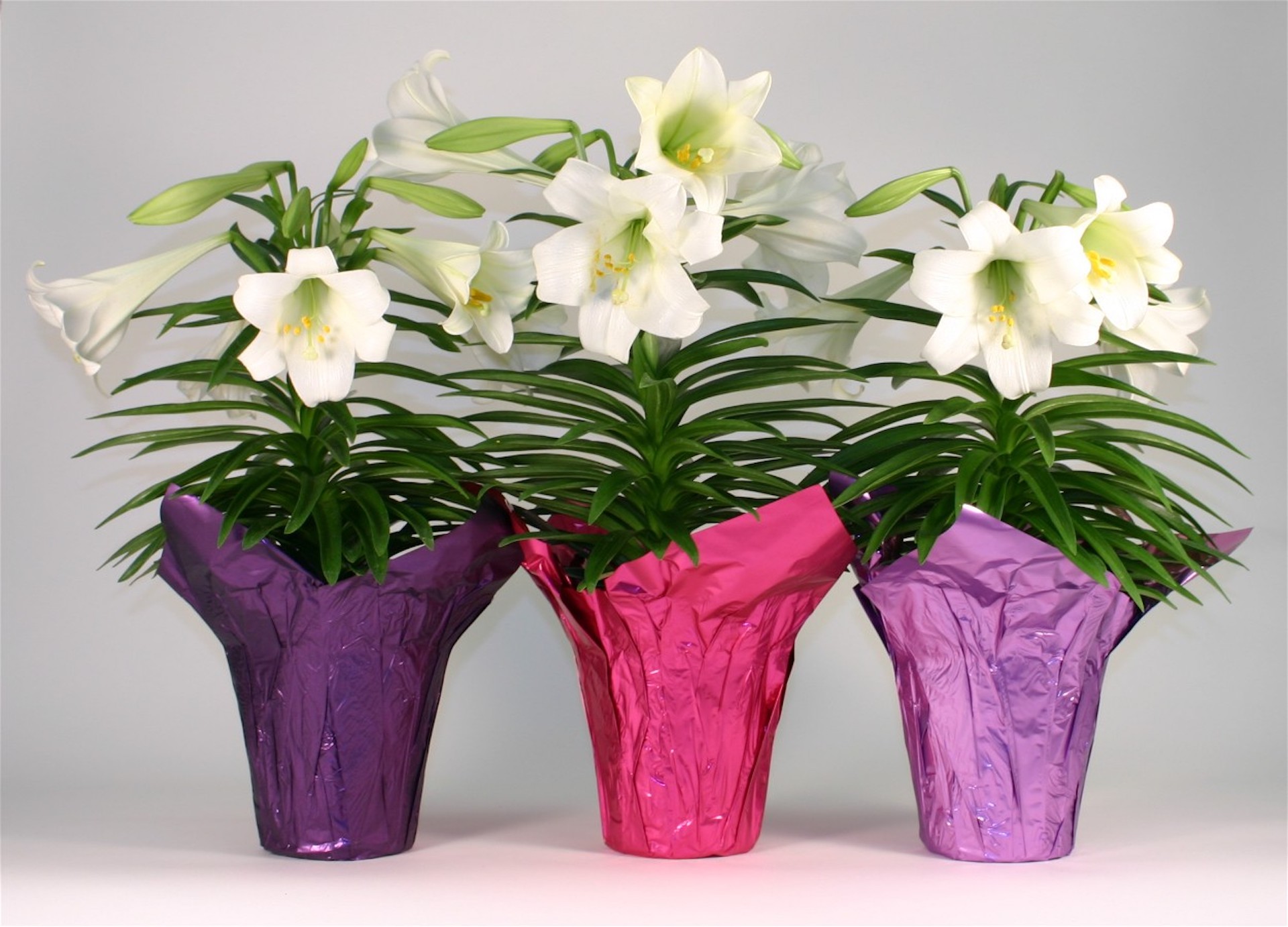 In North America, the tradition of Easter flowers doesn’t go that far back. This is partly because many of the first settlers were of Puritan stock and not given to becoming too excited about gaudy blooms. And it was a hard scrabble life for many generations: people tended to concentrate more on keeping the family fed and clothed than blooms. And also, in the Northeast especially, there really wasn’t much in bloom you could use as a floral decoration that early in spring (North America is the coldest continent after Antarctica, with spring weather arriving many weeks later than in much of Europe). Even on Palm Sunday, which is celebrated with palm fronds elsewhere, North American colonists had to be make do with whatever vegetation they could find that was still green, such as fir and spruce branches.

It really wasn’t until after the First World War that the first discernable Easter flower came to the fore in North America. The white trumpet lily (Lilium longiflorum), from the Japanese island of Ryukyu, began to be grown in pots for Easter on the West Coast and was soon selling as “the Easter lily,” a name it has kept ever since. Now it’s so popular that more than 12 million are grown for Easter every year. And our society is less puritanical these days—and richer, too, better able to afford buying flowers—and has therefore opened up to other Easter flowers as well: spring bulbs, potted hydrangeas, etc.

Elsewhere in the world, though, floral traditions associated with Easter are much older, often going back centuries. Indeed, most predate Christianity and even the death of Jesus, holdovers from long-forgotten pagan spring festivals. Few homes and churches elsewhere in the world are not filled with flowers each year at Easter time, as they have been for centuries.

Here are some examples of Easter flowers throughout the world.

The traditional Easter flower varies by region in France. In some regions, it is, as in England, the pasqueflower (Pulsatilla vulgaris); in others, the lawn daisy (Bellis perennis), which the French call pâquerette (little Easter flower). In general, though, and also in other European countries, the yellow daffodil (Narcissus pseudonarcissus and others) is the prime floral symbol of Easter. It is closely associated with the resurrection because the flower seems to appear out of nowhere from a seemingly dead earth.

In Ireland, there is an Easter lily (lile na Cásca in Irish), but it’s not a real lily (Lilium) at all. Rather, it’s the white calla (Zantedeschia aethiopica). This tradition began after the Easter Rising of 1916 when around 400 people died and white calla flowers were given away at the funerals. Today, this false Easter lily is considered a symbol of peace.

The red tulip is the traditional symbol of Easter in Germany. Its intense color is said to represent the blood of Christ.

In addition to the yellow daffodil, the iris is a popular Easter flower in these two countries, especially the purple Dutch iris (Iris × hollandica), as the color purple is associated with the passion of Christ.

As in England, the pussy willow, the first spring flower in most of Russia, is the traditional Easter flower. Besides, it is the traditional substitute for palm branches on Palm Sunday in Orthodox churches, given the general absence of palms trees in Russia and its neighboring lands. Orthodox priests bless pussy willow branches on Palm Sunday, then people take them home and display them in their homes until the following year. They are then ritually burned on Shrove Tuesday (Масленица) providing the ashes for Ash Wednesday (Пепельная Среда), the first day of Lent.

A surprise awaits tourists from the northern hemisphere visiting these countries at Easter, because the traditional Easter flower is … the poinsettia (Euphorbia pulcherrima), which is our Christmas flower! But of course, the seasons are reversed in the south of this continent and the poinsettia thus blooms during their fall, when Easter occurs. In fact, they call the poinsettia flor de pascua (Easter flower). Its red color doesn’t upset anyone, but is rather considered a symbol of the blood of Christ!

If you thought the passionflower (Passiflora spp.) had any relation with romantic passion, you’d wrong. The name signifies the passion of Christ. From the 16th century on, Spanish missionaries used it as a tool to teach the story of Christ to the natives in the following way: the flower’s ten tepals represented the ten faithful apostles (this excludes Peter, the denier, and Judas Iscariot, the traitor), the three stigmata recall the three nails, the five anthers are the five sacred wounds, the tendrils symbolize the whips of flagellation and the circle of filaments in the center of the flower allude to the crown of thorns. Quite the Easter flower, in a very lugubrious way, don’t you think?

In some areas of Brasil, a large shrub with purple flowers, Tibouchina mutabilis, is the symbol of Easter. And the Northerners’ Christmas cactus (Schlumbergera spp.), which actually comes from Brazil, blooms in the opposite season there and is thus called Easter cactus (cactus de Páscoa) in that country.

Since Australia is also in the Southern Hemisphere, Easter takes place in the fall and therefore it’s mostly fall flowers that are associated with Easter celebrations. And the New England aster or Michaelmas daisy (Symphotrichum novae-angliae), although native to North America, is the most popular Easter flower. Logically, it’s called Easter daisy in Australia. And the Easter lily (Lilium longifolium), which North Americans have to force in special greenhouses to get to bloom at Easter, flowers quite naturally at Easter down under.

No matter where you live, therefore, you can celebrate Easter with flowers. Go to your local garden center and discover the profusion of beautiful pots of bloom that await you!

3 comments on “Easter Flowers Around the World”