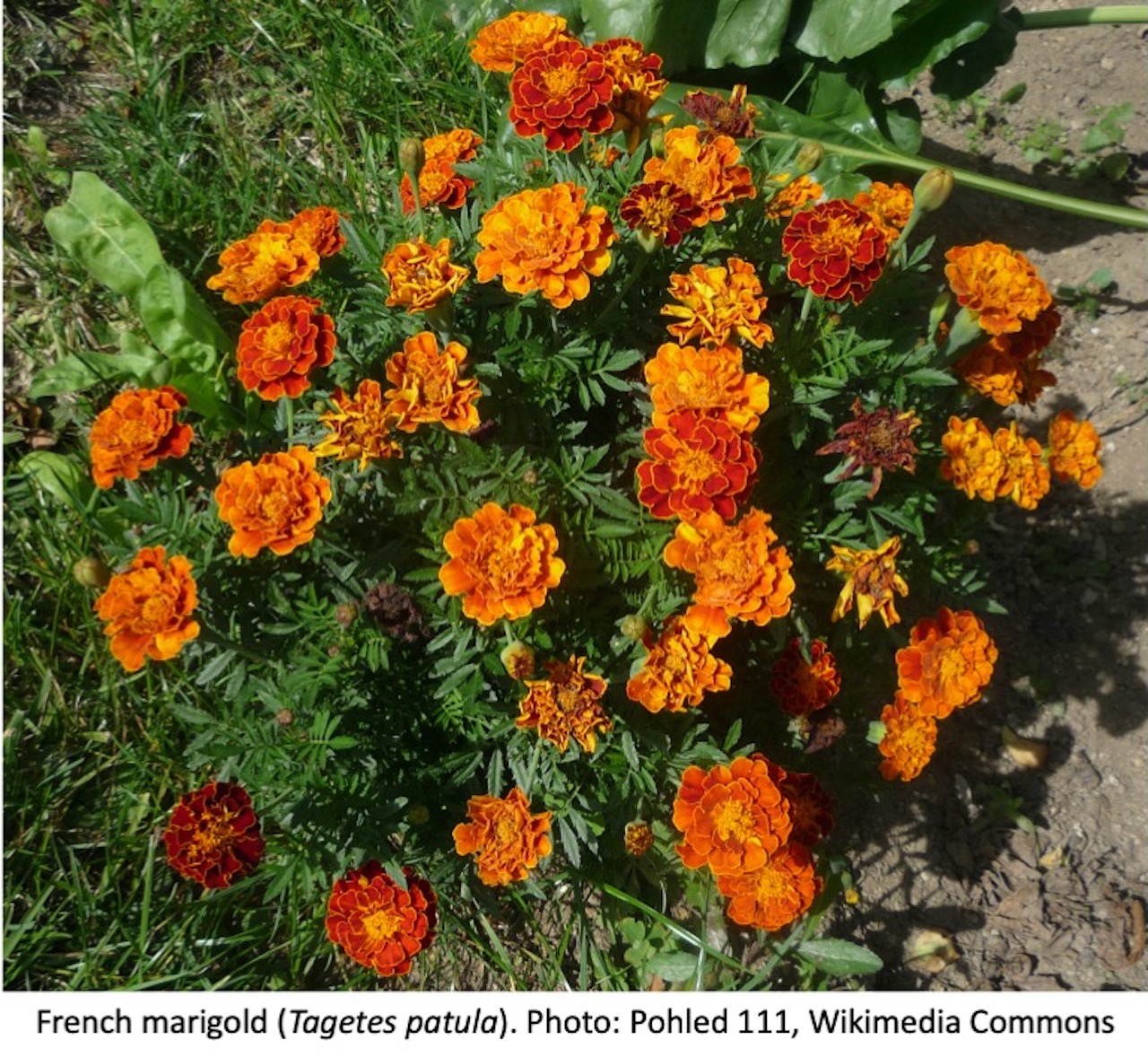 The idea that French marigolds (Tagetes patula) or other species of marigolds (Tagetes spp.) can control nematodes is not entirely a myth, but its usefulness is so limited that it’s not far from being one. Maybe we could call it a half-myth? Or a myth under most circumstances? At any rate, the nematocidal capacities of marigolds are not going to be useful to most temperate climate gardeners. Read on to understand why.

The common belief in companion planting circles is that you can plant French marigolds as companion plants next to vegetables in order to prevent or to control nematodes. The usual theory is that marigolds exude some chemical from their roots that chases the pest away. If only things were that simple!

So, what are nematodes? They’re microscopic roundworms, sometimes called eelworms, and most of the many thousands of species are actually harmless to plants. Some, indeed, are predators on plant pests and thus beneficial: gardeners use certain species to control white grubs, weevils, thrips, ants, slugs and even termites, for example. But there are also many nematodes that are harmful to plants and, when it comes to vegetables, the ones to be most concerned about would be root-knot nematodes, especially those in the genus Meloidogyne.

These nematodes provoke the formation of galls on the roots of many plants, including such common vegetables as beans, beets, carrots, corn, eggplants, melons, okra, onions, peas, potatoes, squash, sweet potatoes and tomatoes. The galls reduce the flow of water and nutrients to the plant above and can therefore seriously reduce the plant’s capacity to produce a normal crop.

Why Treat for a Problem You Don’t Have?

Most root-knot nematode species are tropical or subtropical and even those that are hardier don’t proliferate as well in cooler climates. They need warm soil to start their season and are put off by springs that take time to heat up and summers that are short. They can indeed be a serious problem in the tropics and the Deep South, but in northern climes, they aren’t nearly as frequent. The average home gardener may never see a single case of root-knot nematodes in a lifetime of gardening!

And it’s not just a question of poor adaptation to cool soils. Root-knot nematodes just don’t seem to be common in small gardens, like home gardens or community gardens. They’re more a problem for farmers who grow crops—say tomatoes or onions—on a large scale and repeatedly grow the same crop in the same field year after year. Yes, they’re very much linked to vast monocultures and lack of crop rotation. Again, that’s especially true in the North. In hot climates, root-knot nematodes are much more widespread.

So, before you plant marigolds to control nematodes, why not check—pull up a weak plant or two and check their roots for galls—to see if nematodes are even a problem in your garden?

Even If You Do Have Nematodes

Even if you belong to the minority of home gardeners with a root-knot nematode problem, planting marigolds as companion plants, that is, around or among vegetables likely to be infested, will actually do absolutely nothing to correct the situation. In fact, it will probably make it slightly worse. Here’s why:

Marigolds, especially certain cultivars of the French marigold, Tagetes patula, like ‘Nema-Gone’ (other species are less effective against most species of root-knot nematodes), do not repel nematodes as one sometimes hears, but rather poison them once they penetrate their roots. Root-knot nematodes seem to sense the toxicity of marigold roots and will avoid them if possible … but that only drives them to invade the roots of any nearby plants, including your vegetables. So, marigolds will actually tend to concentrate the problem on your veggies rather than help them.

But you can control root-knot nematodes with marigolds … if you use them as a cover crop, that is, as a monoculture.

Marigolds as a Cover Crop

This technique should be applied on a plot that was seriously infested with root nematodes the previous year.

Plant nothing but marigolds in the plot for two to four months. In colder climates, that would be the entire season; in mild ones, though, you could have a fall/winter marigold crop eliminating nematodes followed by a spring/summer crop of a susceptible vegetable.

This will give the nematodes little choice. In the absence of any other food source, the hungry nematodes will have to migrate to and move into marigold roots where toxins inside will kill them before they can reproduce.

The following growing season, therefore, you will be able to grow plants susceptible to nematodes with little risk of damage, since the marigold cover crop will have reduced the numbers of nematodes so thoroughly there won’t be enough left to do any major damage.

But I repeat, do you really want to apply such a drastic treatment (imagine, an entire season without vegetables!) if you’re not even sure you have a nematode problem?!

But Marigolds Do Repel Pests, Right?

It is a common belief among gardeners that plants that smell strange to us will repel pests. And crushed marigold foliage certainly has an odd smell. Thus, people claim marigolds will repel a whole host of vegetable garden pests: cabbage worm, carrot fly, slugs, even cats! But this seems to be a case of wishful thinking. When you dig a bit into scientific studies on the subject, in general the presence of marigolds either has no effect on pests or slightly increases predation.

Marigolds Can Still Be Useful

Even if we remove nematode-toxicity and pest repellency from the equation, though, marigolds still have their use in companion planting.

First of all, their flowers help attract pollinating insects to the garden and that’s always a good thing. Most of us grow vegetables that need insect pollination, like cucumbers and squash, so any plant that brings in more bees, hoverflies, etc. are going to helpful.

Also, marigolds make a good trap crop for certain garden pests. They are highly susceptible to spider mites, aphids* and thrips, for example. Thus, if you interplant them with your vegetables, there is a very good chance that when pests attack, they’ll settle on the marigolds first. If so, it is, of course, important to pull out and destroy the marigolds before the pest population moves onto your vegetables.

*Amazingly, many companion planting sites claim marigolds repel aphids, yet when you grow them, they’re one of the most commonly affected plants!

So, marigolds are indeed the vegetable gardener’s friend… just not in the way you may have thought.