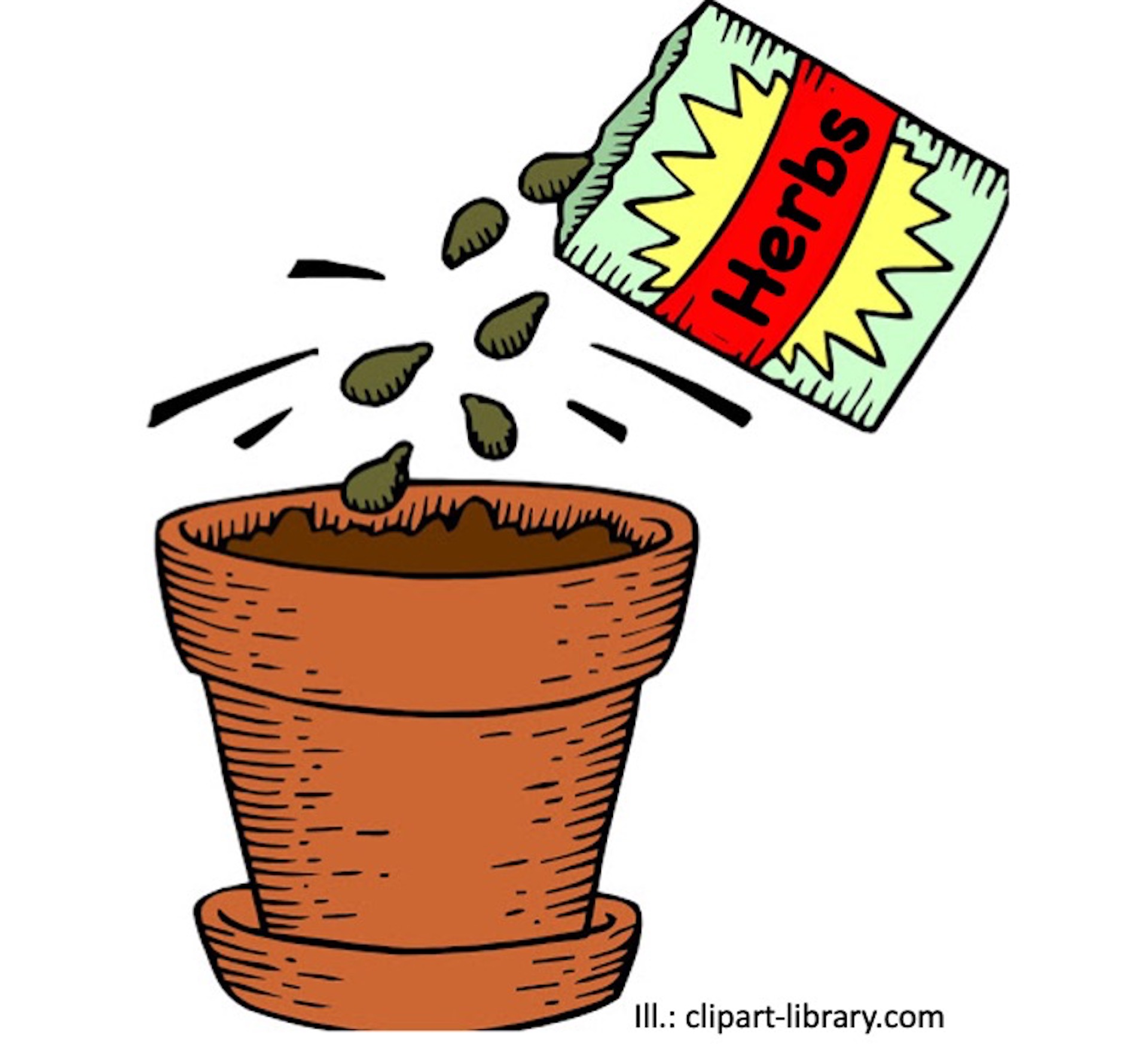 Question: When I sow chives, parsley, sage and other herbs with multiple stems, how many seeds should I sow per pot? Will one seed give a clump or only one stem? If it gives only one stem, should I sow a handful of seeds?

Answer: In general, when you sow seeds indoors, sow them with the idea that there will be one plant per pot at the end of the process. You can still sow 2 or 3 seeds just to ensure that at least one germinates, but then thin out to one seedling per pot as the plant grows. That’s because many seedlings growing in the same small space will create competition for resources (light, water, minerals, etc.) and likely give inferior results.

How the plant grows after that depends on the species. Typically, you plant out that single seedling … and let it do its thing!

Most annual and biennial herbs produce one single stem, but can branch in their upper parts to create a fuller-looking plant with more leaves to harvest or you can pinch their tips to encourage branching. Some perennial herbs likewise produce a single stem from seed and remain that way all their life, but most produce a single tuft of leaves at first, then over time, a clump forms as the plant produces a cluster of offsets at its base, all identical to the original plant.

Chives Is an Exception

I think what’s throwing you is that chives (Allium schoenoprasum, USDA hardiness zones 2 to 10) are an exception to the rule.

An individual chive plant is a very narrow, upright-growing, grasslike plant with only a few leaves and a very limited root system. In nature, it forms a dense clump of identical offsets on its own over a few years and that is its normal habit. It doesn’t seem to suffer from this dense, clumping habit. And this gives you a larger number of leaves you can harvest per clump per year.

For that reason, rather than starting one chives plant per pot, you can break the rule and sow 10 to 15 seeds per pot so that you create a clump right from the start. This will give you a reasonable harvest the first year whereas a plant growing alone would offer little to harvest before the second year. Chives are very long-lived and a clump can last for decades.

As for the two other plants you asked about, parsley and sage are both best grown as individual plants.

With parsley (Petroselinum crispum, USDA hardiness 2 to 11), you don’t want a clump: that will just give weakened, unproductive plants. It doesn’t produce offsets and grows best on its own. (True enough, it is often sold in pots jammed full of seedlings, but that gives very poor results: see Commercial Herb Plants: Doomed to Die?) So, allow one seed to grow and it will produce a rosette (a single stem with a circle of leaves) and numerous dark green leaves. It’s a biennial, but harvested the first year as if it were an annual, as it quickly goes to seed the second year.

Sage (Salvia officinalis, USDA hardiness zones 5 to 9) is often considered a perennial by gardeners, but is in fact a subshrub: low-growing, but with a woody base and branches that persist from year to year, but usually pruned back harshly every spring. It starts off as a single plant with just one stem at the base, but over time, where it is hardy at least, it will eventually produce offsets. By then, though, it has often become tough and woody at the base and less productive. Typically, gardeners start new plants of it, but from stem cuttings rather than division or seed, every 4 or 5 years so they’ll have plants with better vigor.

What more can I say about sowing seeds of herbs other that, usually, you do sow one plant per pot, but there are always exceptions to the rule.

2 comments on “How Many Herb Seeds Should I Sow per Pot?”