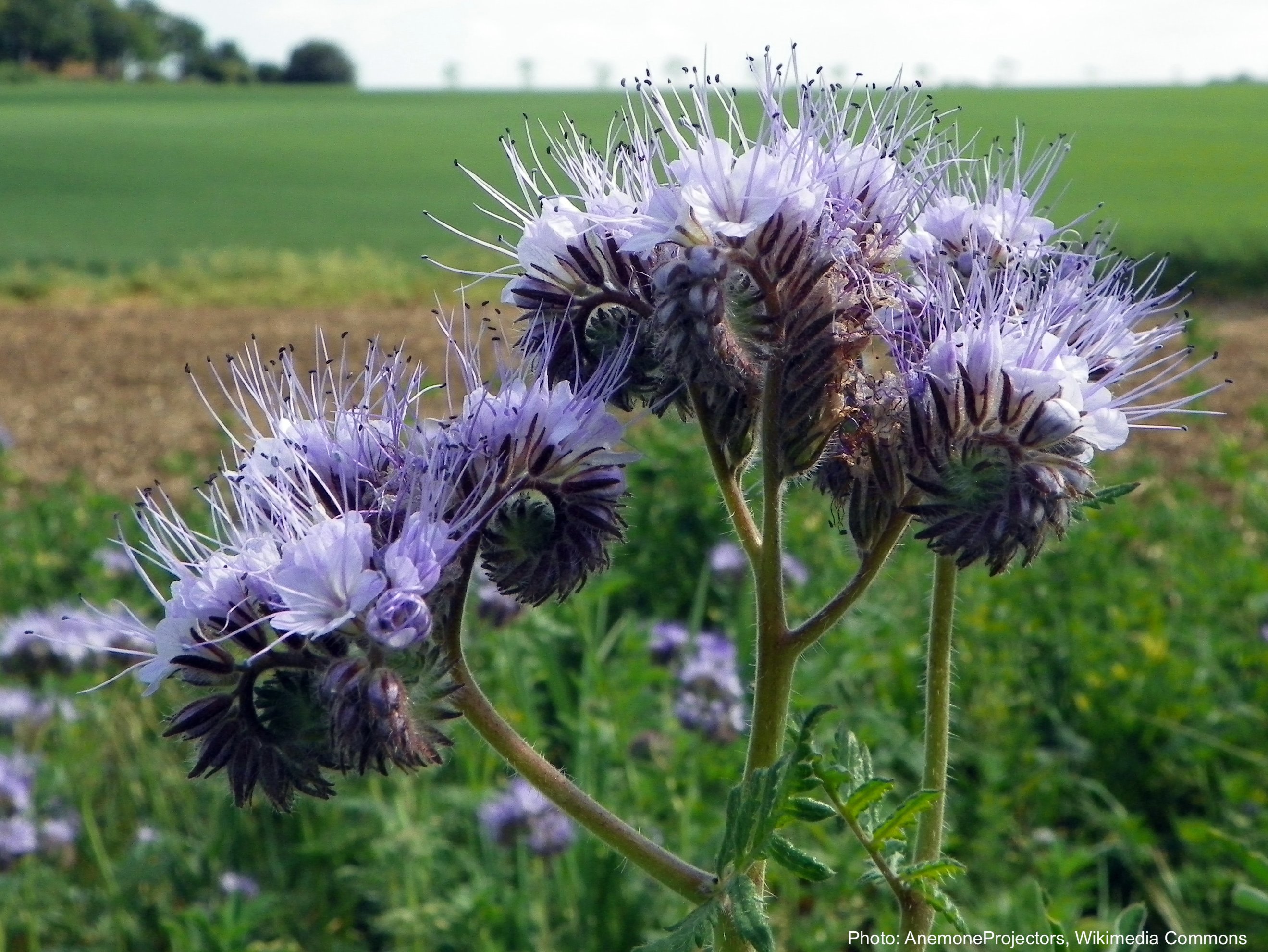 If you grow fruit-bearing vegetables like squash, cucumbers, eggplant, okra or melons, you always need insect visitors to ensure pollination and one of the lessons gardeners have learned from companion planting is that you get better pollination if you include a reasonable percentage of flowering plants in the garden, especially easy-to-grow annuals. (You’ll find a list of 30 different pollinator-friendly flowers in the article Separate Beds for Flowers and Vegetables?) That said, some flowers are better at attracting pollinators than the others … and one of the best, possibly the best, is lacy phacelia (Phacelia tanacetifolia), also called purple tansy, blue tansy, bee phacelia, fiddleneck and lacy scorpion-weed.

This easy-to-grow annual is certainly the one that attracts the most pollinators to my garden. Due to the abundant and rapidly renewed nectar its flowers produce, it always seems to be buzzing with bees, and a wide range of bees at that, including bumblebees, honeybees and all sorts of native bees. Plus, it attracts other pollinators as well, including hoverflies, butterflies and even hummingbirds. Another advantage is that it blooms over a very long season: most of the summer!

Here’s a comment I received from a reader last summer after recommending the previous spring she sow lacy phacelia to improve the pollination of her vegetables:

Thanks for your good advice.

I can assure you that this plant will quickly become the star of the garden in the eyes of pollinators and will seriously up their number.

What is Lacy Phacelia?

Phacelia tanacetifolia is an annual flower native to the southwestern United States and Mexico that belongs to either the Boraginaceae or Hydrophyllaceae family (botanical opinions differ). It is now sometimes found naturalized near agricultural fields in temperate regions elsewhere in the world.

It’s a member of the genus Phacelia genus of some 150 species, all native to the New World. In the wild, lacy phacelia grows in full sun, often in poor, sandy or rocky and sometimes alkaline soils under considerable aridity, but it has been shown to adapt well in cultivation to soils of most kinds that aren’t too acidic (a pH between 6.0 and 8.5), as long as a drainage is good. Also, it will grow quite well in partial shade, not just in sun.

Its epithet tancetifolia means “tansy leaved” and refers to the fact that the alternate mid-green leaves are deeply cut much like those of the herb tansy (Tanacteum vulgare). It grows from an upright hairy reddish stem from 2 to 3 ½ feet (60 to 100 cm) tall, sometimes producing 2 or 3 branches.

The flowers are borne in an inflorescence coiled up like a fiddlehead or scorpion’s tail that gradually unfurls as the flowers open. The small, highly fragrant, 5-petaled flowers are cup-shaped about ½ inch (1 cm) in diameter) and lavender blue. They bear 5 long stamens and 2 styles that extend far beyond the corolla and give the cluster of blooms a fuzzy appearance.

The plant usually blooms from early July to September in temperate regions. In areas where summer lasts 3 months or more, though, it may be necessary to sow a second time in midsummer to achieve flowering that covers the entire growing season.

Some species of Phacelia have irritating hairs, but not lacy phacelia. Nor is it toxic to humans or pets. It’s sometimes grown, mixed with other plants, as fodder for livestock.

How to Grow Lacy Phacelia

Normally, you’d sow lacy phacelia seeds outdoors either late in the fall (the seeds are frost resistant) for germination the following spring or in the spring while the soil is still cool. Sow the seeds about 6 to 8 inches (15 to 20 cm) apart and about ¼ inch (5 mm) deep, making sure to cover them with soil, as they only germinate in darkness. Germination is most successful when the soil is on the cool side, between 40 and 68° F (5 and 20° C) and decreases at higher temperatures. It will come into bloom in around 45 to 60 days.

You can also sow phacelia indoors in pots or trays about 4 weeks before the last frost date for transplanting in the garden. However, you’ll ideally have a cool spot for this and make sure too that the seedlings are placed in the dark until they start to sprout, then move them into the sunniest spot possible. That said, few gardeners sow this plant indoors, as this plant does so well from seed sown outdoors.

For pollination purposes, tansy-leaved phacelia can be used as a companion plant sown directly in the garden between vegetables or concentrated in a neighboring pollinator garden. It also grows well in containers on the deck or the balcony.

During the summer, phacelia requires little maintenance other than possibly a bit of watering in case of severe drought. No fertilization seems needed in most soils.

The seeds can be stored for 3 or 4 years under normal conditions. If you harvest seeds at the end of the growing season, do note that they won’t germinate immediately: they seem to require at least a 2-month rest period before sprouting can occur.

Lacy phacelia self-sows modestly in open locations and does naturalize to some degree, but doesn’t seem very persistent and tends to disappear after a few years.

Tansy-leaved phacelia is well known among beekeepers as a honey plant and provides a delicious, very fragrant honey sold as phacelia honey. It is also used as a cover crop or green manure in farmers’ fields.

Phacelia can also be used to attract beneficial insects other than pollinators, including predatory wasps that feed on common garden pests. For example, several parasitic wasps feed on it as adults, then lay their eggs on or in pest species. In some orchards lacy phacelia is sown in rows between the trees to control such pests as apple and plum worms. Other beneficials that feed on phacelia flowers at some point in their existence include ground beetles, tachinid flies and, especially, hoverflies, whose larvae are fierce aphid predators while the adults are important flower pollinators. Many organic farms sow wide bands of phacelia near susceptible crops as a means of preventing aphid infestations.

Where to Find Lacy Phacelia

I can’t say that tansy-leaved phacelia seeds are available everywhere: that would be an exaggeration, but it is far from a rare plant in seed catalogs. Check out your favorite ones and see for yourself, especially those specializing in organic gardening. You’ll also find that it is commonly included in wildflower seed blends.

You probably won’t find seed in local garden centers, though, nor have I ever seen phacelia plants among the bedding annuals they offer, but this plant is rapidly gaining in popularity and it may well reach that stage some time soon.

Lacy phacelia: a plant to discover if you don’t already know it … and one that could totally change the way you garden!

5 comments on “Lacy Phacelia: Possibly the Best Plant for Pollinators!”