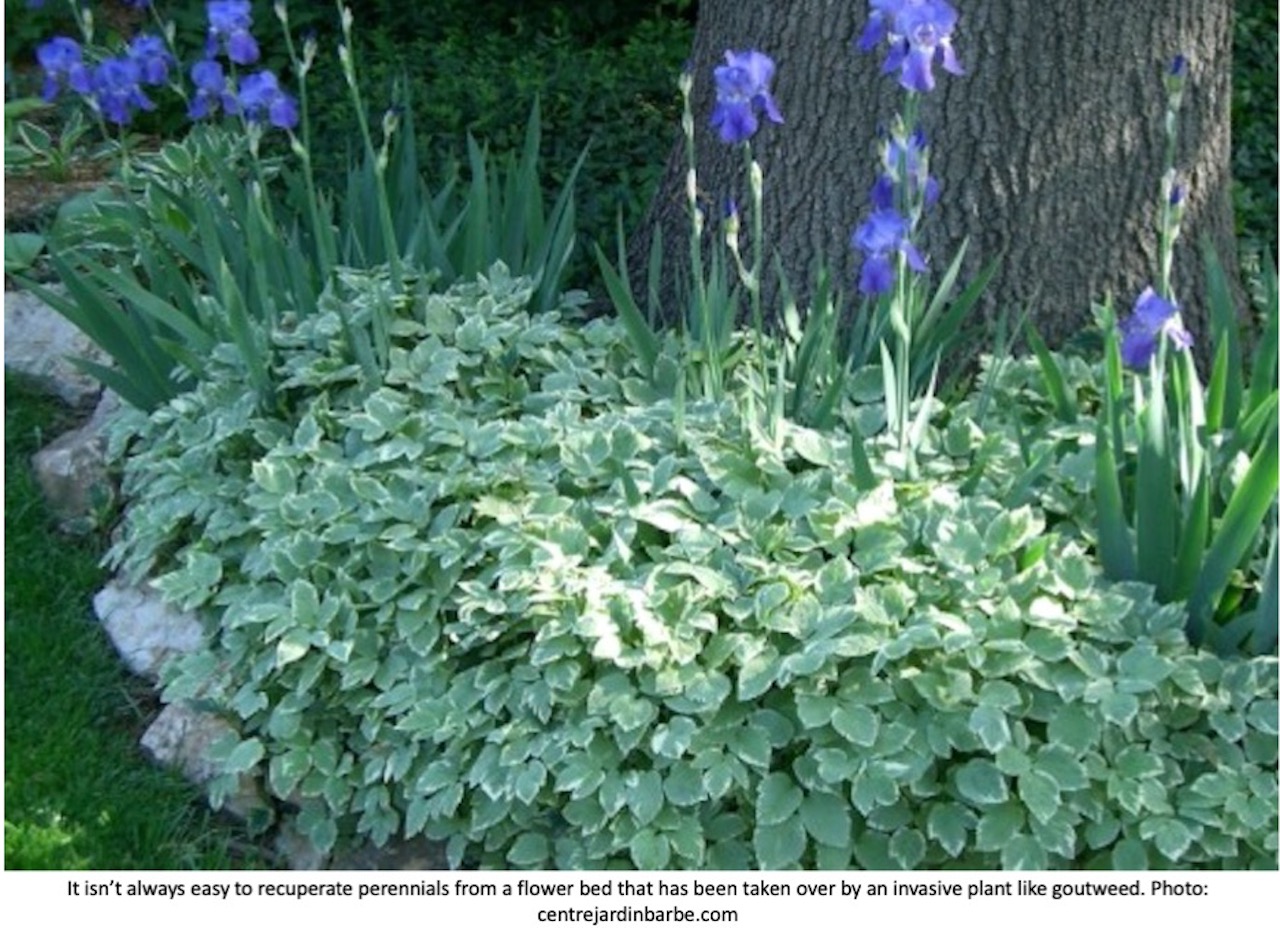 Question: One of my perennial beds is full of goutweed and I’ve decided to use the black tarp method you described in How to Control Invasive Plants to redo the bed. This worked perfectly in getting rid of lily of the valley in another part of my garden. However, that time I simply covered the entire section in tarp and didn’t bother trying to recuperate the other plants. This time there are a few perennials I want to save. Can I dig them up and replant them, or will they be infested with goutweed?

Answer: Any plant (perennial, shrub, bulb, etc.) dug up from a bed invaded by a plant that spreads by underground rhizomes like goutweed (Aegopodium podagraria), lily-of-the-valley (Convallaria majalis), plume poppy (Macleaya cordata), Japanese knotweed (Fallopia japonica), sorrel (Rumex acetosa) or quackgrass (Elymus repens) likely will have rhizomes of the weedy species mixed in with its roots. So, by trying to save the plant from invasion by moving it, you could just end up spreading the pest species, as the slightest bit of rhizome left by accident will result in a new plant.

Often the easiest thing is just to abandon the old plants, cover the entire surface with black tarp, thus killing both the weed species and the other plants, and simply start afresh.

However, there are other possibilities.

For one, have you considered taking cuttings of your perennials?

Many perennials can be grown from cuttings taken from the aboveground part of the plant and these will, of course, contain no weedy rhizomes. Most perennials with a branching habit (phlox, sedums, asters, chrysanthemums, lamiums, monardas and thousands more) can be readily grown from stem cuttings  as well as almost all shrubs.

Or, if they are species (most cultivars [cultivated varieties] won’t come true from seed), you could collect seed and sow those.

However, you can also try to dig up plants you can’t grow from cuttings and rid them of weed rhizomes. Just be very, very careful.

Here’s what to do:

Dig up the plant and rinse off all its soil. Remove any goutweed rhizomes you see growing through its root ball. Now pot it up. Do not plant it in another part of the garden until it has undergone a 3-month quarantine in its pot. If no goutweed has appeared after 3 months, you’ve successfully eliminated the pest species and you can replant the potted plant.

Often dividing the plant you want to save into smaller parts will make things easier. Divisions of the plant will be easier to check for rhizomes, as there will be fewer roots among which the rhizomes can hide. Saving a division is therefore often a better choice than trying to save the entire mother plant.

So yes, you can save plants from the invaders that have taken over their part of the garden. You just have to be very careful in doing so.

5 comments on “Should You Try to Save Plants from a Weed-Infested Bed?”