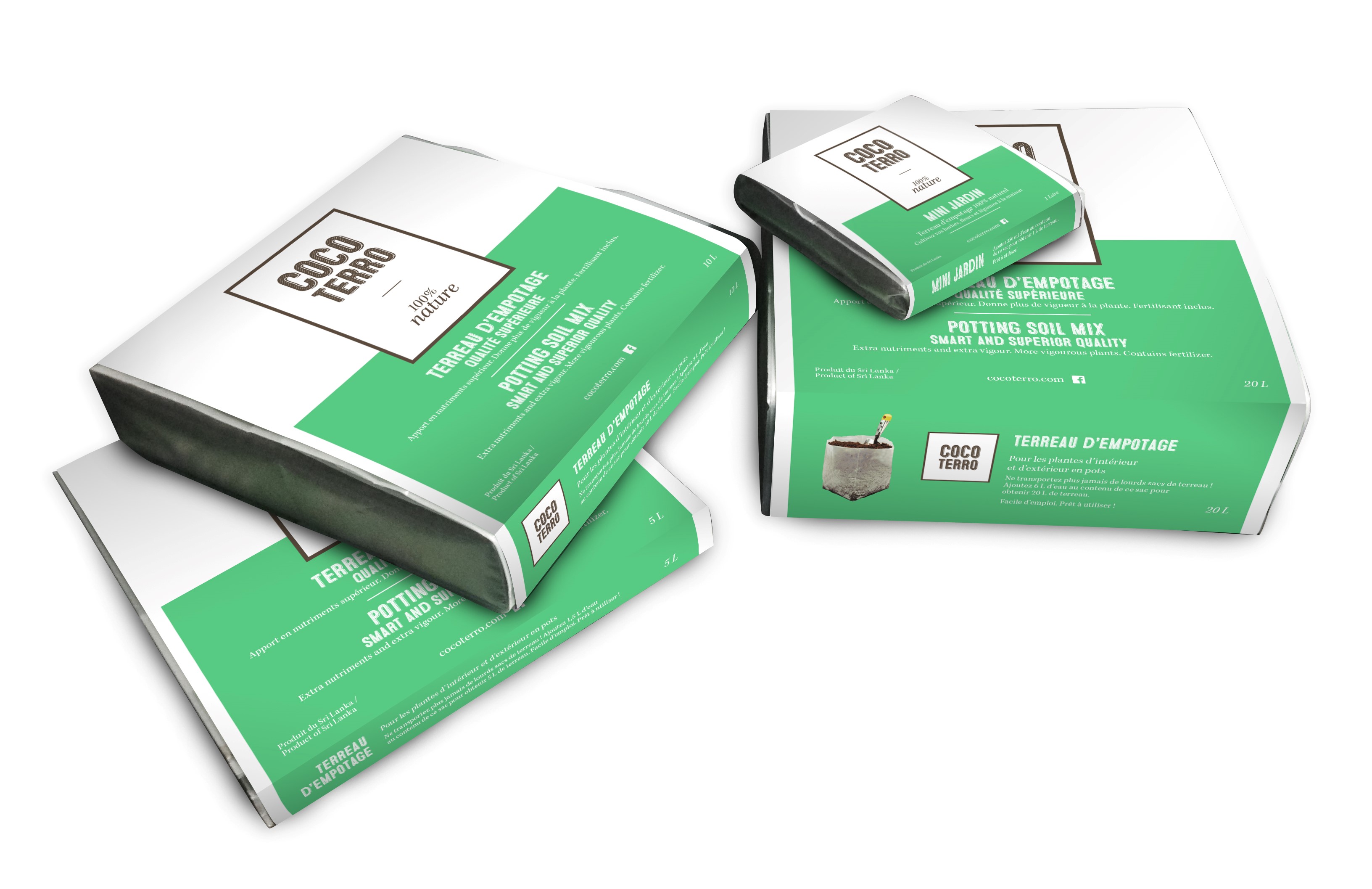 I recently discovered a new product in the potting mix section of my local garden center: little green rectangles labeled Coco Terro Potting Soil Mix. At first, I didn’t quite get it. It was hard to believe that they were made up of potting soil: they looked like wooden blocks wrapped in plastic.

The label said 10 L. That would be 2.5 gallons. The package I had in front of me clearly did not contain 10 L of potting soil; not even 1 L at my reckoning. I was puzzled at first, then suddenly got it. It was compressed potting soil, seriously compressed!

Condensed in this small, fairly insignificant block were 10 L of potting soil: a good bucketful, enough to fill 10 medium-sized pots. And there were other blocks of different sizes being sold: 1 L, 5 L, and 20 L, depending on how much potting soil you needed.

I took one of the 10 L packs in my hands. It was surprisingly light. And rigid (who would have thought that potting soil could be rigid?) Also, so easy to handle. Not at all like an ordinary bag of potting soil that awkwardly bends in two when you try to grab it by the middle.

I decided to give the new product a try. After all, I had come to buy potting soil! So, I put four 10 L blocks in my basket, one on top of the other. (They’re so easily stackable you could build a kid’s fort with them!) “They’re going to be awfully easy to store,” I remember thinking.

I soon realized that not only was that true, but also that they take up very little space. I mean, I had been intending to buy a bale of potting soil: that is, 107 L (3.8 cubic feet), weighing 60 lb (27 kg)! I was not looking forward to struggling to get that huge bag into my car, nor from the car to my house. And I would have had the huge thing sitting on my basement floor for months! Instead, I had lightweight blocks I could stack and store anywhere. What a difference!

When I got home, I put one of the blocks on my workbench, which also happens to be my potting bench, to study how to use it.

There were instructions on the back of the package. “3 Easy Steps” it said, with photos to show what to do.

“Open the bag,” was step 1. What bag? However, after removing the cardboard wrapper, it turned out the block of potting soil was wrapped inside a four-sided translucent bag. I opened it and placed it on the workbench.

“Add 3 liters of water,” was step 2. Seemed like a lot for the thin block of potting soil at the bottom of the bag, but I followed the instructions. Since my watering can holds 3 L (3 quarts) of water (what a coincidence!), I simply filled it nearly to the brim, then started to pour water into the bottom of the bag, on top of the block of condensed potting soil and … a miracle occurred!

I hadn’t even finished adding water when the block started to expand. And expand. And expand! I didn’t expect that: it was a real surprise! Soon the bag was almost full: 10 L of potting soil from a simple little block: it was like magic!

I’ve promised myself that the next time I prepare some of this potting soil, I’ll do it in front of my grandchildren: they’ll get a kick out of watching it expand so rapidly!

The resulting soil is very light and uniform: there was no perlite or vermiculite like the potting soil I was used to, only brown fibers. I quickly stuck my hand into it for a feel. It was airier than regular potting soil and surprisingly clean. A few fibers stuck to my hand and I easily brushed them off, but it didn’t get my hands dirty, not even under my fingernails. Nor did the soil dirty the workbench. And the potting soil also felt evenly moist from the start. There was no need to mix the water in as I would have done with a peat moss-based potting mix: the fibers seemed absorb their fair share of moisture all on their own. “This is going to be awfully easy to water,” I remember thinking.

Afterwards, I transplanted a few dozen seedlings, as per my original plan, then, as there was some soil left over, I repotted a few houseplants. Just as I would have done with a peat-based potting mix. It turns out this new potting soil mix is just as easy to use as any potting soil!

I had already guessed that the potting soil was made from coconut fibers, also called coir. After all, the product was called Coco Terro, so the word coco pretty much gave it away. But I wasn’t too sure what part of the coconut the fibers come from. After all, where I live (in frigid Canada) we don’t run into coconuts on a daily basis.

Well, that’s where Wikipedia comes in handy. I looked up coir on Wikipedia and discovered it’s the fiber extracted from the outer husk of the coconut itself. And that it’s sometimes called coco peat, as it’s considered a sustainable replacement for peat moss in potting mixes, although it contains no actual peat. There was lots there to discover.

Still curious, I decided to check out the product’s website: cocoterro.com, as listed on the packaging. I discovered that the distributor, Produits Multi-Formes, was from my home province, Quebec, only about an hour and a half drive from where I live, not far from the American border. So, I gave them a call and asked a few questions.

Here’s what I learned:

Their coconut fiber is produced in Sri Lanka as a by-product of the local coconut harvesting industry and recycles in a useful way what would otherwise have been a waste product. In addition, preparing it provides Sri Lankan women with work in a decent environment and hope for a better quality of life.

Their coconut fiber is washed, sterilized, dried and compressed in Multi-Formes’ partner factory in Sri Lanka, then arrives in Canada pre-packaged for distribution to Canadian and American markets.

Their potting soil mix is basically pure coconut fiber, except that an organic starter fertilizer has been added, enough to keep the plants growing for the first season—around 4 to 6 months. The potting soil is a natural product, of course, and is awaiting organic certification from Ecocert Canada.

Here are some characteristics of Coco Terro Potting Soil Mix:

• Coco Terro potting soil absorbs water quickly and retains it well, but also allows any excess moisture to drain away. After using it for planting, you just have to take care of your plants as you always have, watering thoroughly as soon as the soil feels dry to the touch.

• You can use Coco Terro potting soil for all your container needs: houseplants, seedlings, outdoor planters, raised container gardens and more. Coconut fiber has been used extensively all over the world for growing plants and has proven to be an effective soil replacement product.

While doing my research for this article, I discovered that Multi-Formes offers other coconut fiber products to gardeners, all certified organic by Ecocert.

For example, they offer coco pots: pots made of coconut fiber using natural latex as a binder. They’re biodegradable: perfect for delicate seedlings, such as squash and cucumbers, that don’t like their roots handled. The flexible yet sturdy sides of the pot allow plant roots to push through when it’s planted in the ground. Once covered with soil, it decomposes in about 3 months. If used as a pot for growing houseplants, thus leaving its sides exposed to the air, the pot will last longer: up to 2 years. I see it as particularly interesting for plants that prefer excellent root aeration, such as orchids and anthuriums.

There is also a rolled coir mat called Coco Roll that can be used to cover vegetable beds to prevent weed growth. It allows water and air to penetrate, but not undesirable plants, and also helps reduce water loss due to evaporation, reducing the frequency of watering. This anti-weed mat will last about 2 years, then, as it decomposes, enriches the soil in organic matter. Another use for it would be to place the mat at the base of a hedge to prevent weeds from invading and to keep the soil cooler.

I am very pleased to have found this new organic potting soil and above all, to no longer have to lug around the annoyingly heavy 60 lb (27 kg) bales of potting soil that I had been buying until very recently! I think you’ll find this product very convenient too!

By Larry Hodgson in partnership with Produits Multi-Formes.