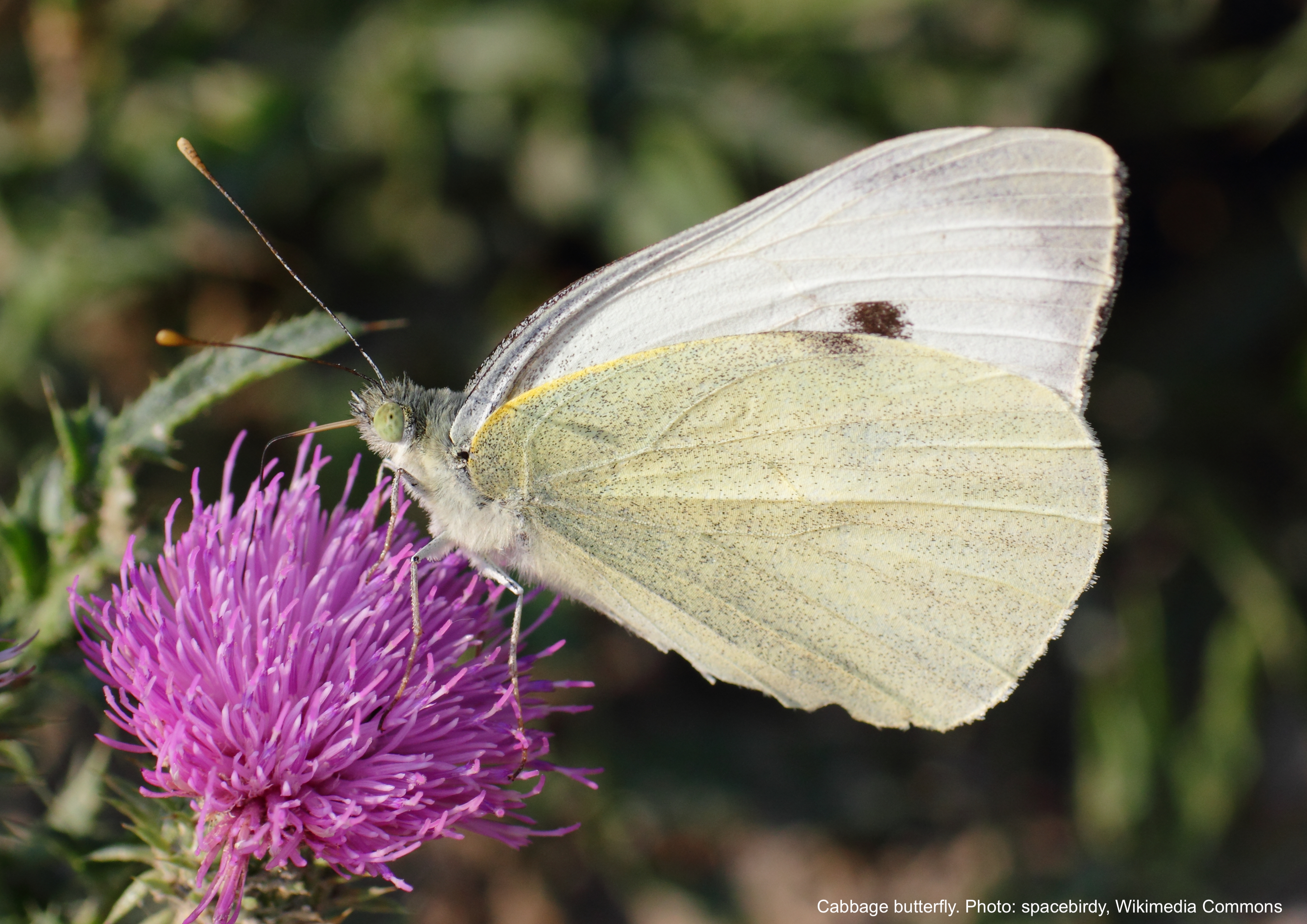 There is a beautiful white butterfly with black markings called the cabbage butterfly or small white (Pieris rapae) that will soon be visiting your garden if indeed it has not already present. It is, in fact, one of the most common butterflies seen in home gardens and if you grow only flowers, you probably enjoy its presence as it flutters from flower to flower looking for nectar. But you’ll be less happy if you grow vegetables.

You see, this beautiful butterfly springs from a voracious caterpillar, the imported cabbageworm, which preys on plants in the cabbage family (Brassicaceae) or crucifers. This includes not just cabbages, but arugula, cauliflower, broccoli, kale, kohlrabi, radish, rutabaga, and others. The green caterpillars may be small, but they’re voracious and can easily chew their way through even a very large cabbage. At first the so-called cabbageworm only chews on the outer leaves and may do relatively little damage, but it later tunnels into the center of the plant, rendering it barely harvestable.

Coming Soon to a Garden Near You

Although the cabbage butterfly is native to Eurasia and Africa, it is now well established all over the world wherever people grow vegetables. And if it fails to find home vegetables to munch on, it is perfectly capable on surviving on wild crucifers, like mustards and cresses.

In colder climates, most of the overwintering pupae are killed by the cold, so the first generation can be small, but soon reinforcements arrive from South, carried by the wind, so there is really no escaping them. There are 2 or 3 generations of imported cabbageworm each summer in the North, 4 or even 5 in the South. So just when you think you’ve won the battle, often it starts up again!

The female lays her yellow eggs singly under the leaves of the crucifers, sometimes only one per plant, but usually 5 to 8 eggs and sometimes up to 30.

Old World gardeners also have to deal with a similar but larger butterfly, the large white (P. brassicae). Gardeners generally just lump them together with P. rapae under the name “cabbage butterflies” when they’re in their winged stage and “cabbageworms” when they are in their larval stage and I’ll do the same here. And really, when it comes to controlling them, there is really no need to distinguish between the two. The large white, however, lays its eggs in clusters rather than singly and there are therefore usually more caterpillars per plant.

How To Prevent and Control Cabbageworms

Here are a few ways of controlling cabbageworms and of limiting damage to your cruciferous vegetables.

Most gardeners who’ve tried various control methods will agree that the most effective protection against cabbageworms is floating row cover. This product, which can be purchased in various lengths and widths, is a thin translucent white fabric that lets in sunlight, air, rain and irrigation, but not insects. Place it loosely over seedlings or plants early in the season, using pegs, rocks, planks or bricks to hold it in place. It is said to be “floating” because it is very light and therefore rises with the plants as they grow. Despite this, many gardeners like to use structures or stakes to hold the cover above the plants.

For a floating row cover to be effective, it’s important use crop rotation. If you plant a cruciferous vegetable where one grew the previous year, then cover it with row cover, pupae may have overwintered at the base of the previous crop and will remain trapped under the row cover when they hatch. Thus they can easily lay eggs on the plants protected by the cover.

Note that the floating row cover also protects against other enemies of crucifers such as cabbage maggots, cabbage aphids and flea beetles. It’s a very handy product if you want to produce perfect cabbages, rutabagas, etc. It even helps stimulate faster growth early in the season, as it holds on to extra heat at night, encouraging plants to grow faster.

Btk (Bacillus thuringiensis kuristaki) is bacterium harmless to humans, animals and even insects other than butterfly larvae. It can be sprayed on crucifers every one or two weeks once you see eggs or caterpillars. Shortly after the caterpillars ingest spores of this bacterium, they stop eating. They die a few days later.

Other biological insecticides can be used to control cabbageworms. Among those that are both effective and safe for humans and pets are insecticidal soap, neem oil, and diatomaceous earth. Pyrethrum is also effective, but must be used with caution, since it is toxic to a wide range of animals including humans. Apply these products every two weeks or after every rain.

Although not for the squeamish, hand picking can be very effective, as cabbageworms move from the underside of the leaf to the top after they hatch, making them fairly visible. Just crush them or drop them into soapy water to kill them (yes, you’re allowed to wear gloves!). Ideally this should be done when they are still small, because then the damage will be minor and have no significant effect on the harvest.

Better yet, check under leaves and remove any eggs before the larvae hatch.

You’ll see a lot of info on the Internet about companion plants to place around or among crucifers to confound cabbage butterflies or even repel them. Among suggestions are garlic, celery, catnip (Nepeta), marijuana, hyssop, mint, onion, rosemary, sage, tansy and thyme. Unfortunately, tests with all of the above plants using control groups has found none to be effective.

There is one exception, though: tomatoes! Intercropping tomatoes among crucifers can effectively reduce the rate of infestation, especially if the tomatoes are planted first with the crucifers following a few weeks later. However, don’t think you’ll be harvesting tomatoes too, as the same studies show that, when the tomato plant starts to bloom, its yellow flowers begin to attract cabbage butterflies instead of repelling them and then they are no longer effective. Therefore you have to pinch off their flowers, meaning you’ll have no tomatoes to harvest.

You can spray plant teas and extracts on crucifers to repel butterflies.

The most effective treatment is tansy tea (Tanacetum vulgare). Prepare it in a blender, chopping up 50 g of tansy leaves in a liter of water. Filter well with cheesecloth and add a drop of insecticidal soap for better adhesion. Now, spray tansy tea on crucifers. Repeat weekly. Tansy tea cannot be stored: it must be used fresh.

Tomato leaf, spinach, peppermint and onion teas have also been shown to be relatively effective, especially tomato leaf and spinach tea. You can produce tomato leaf tea by macerating tomato leaves and shoots in warm or hot water for 2 to 5 hours. Again, a drop of insecticidal soap will help it stick to plant leaves.

Cabbage butterflies much prefer to lay eggs on green leaves. If you grow red cabbage, purple kale or other crucifers with purple or red leaves, not only will the butterflies tend to avoid them, but even if they do lay eggs (and they will if they find nothing else to lay their eggs on), you can easily see the green caterpillars on a red or purple leaf, allowing you to hand pick them quite readily.

Mother Nature provides a variety of predators for cabbageworms: parasitic wasps, birds, spiders, toads, snakes, etc. Generally, however, they either arrive too late or are not effective enough to completely control the pest. They will however reduce the population of cabbageworms, making hand picking more effective. Even buying and releasing predators among crucifer crops (you can buy ladybugs, lacewings or predatory wasps, for example) gives no guarantee of results, as predators often spread out in all directions rather than remaining where you placed them.

Ducks and chickens are very fond of caterpillars of all sorts and cabbageworms are no exception. They’ll rapidly reduce cabbageworm populations to almost nothing if they have access to the plants from the beginning of the season, but chickens, especially, tend to damage young plants, so some monitoring will be required.

Unlike most plants, where monocultures (vast surfaces of a single crop) tend to attract harmful insects and cause greater damage, monocultures of crucifers have been shown to help reduce infestations of cabbage butterfly. Why this happens is not known precisely, but it’s believed that, when given a choice, the cabbage butterfly likes space its eggs out to so as to give each larva the greatest possible amount of food. When it comes upon a crucifer isolated from other related plants, thus sensing no other host plant nearby, the butterfly tends to lays several eggs on it, resulting in more caterpillars and greater damage. In a crucifer monoculture, however, the butterfly tends to spread out its laying, placing only one egg per 2 or 3 plants, resulting in reduced damage.

There you go! Plenty of ways to prevent the cabbage butterfly from ravaging your cruciferous vegetables. Good luck with all your plantings!