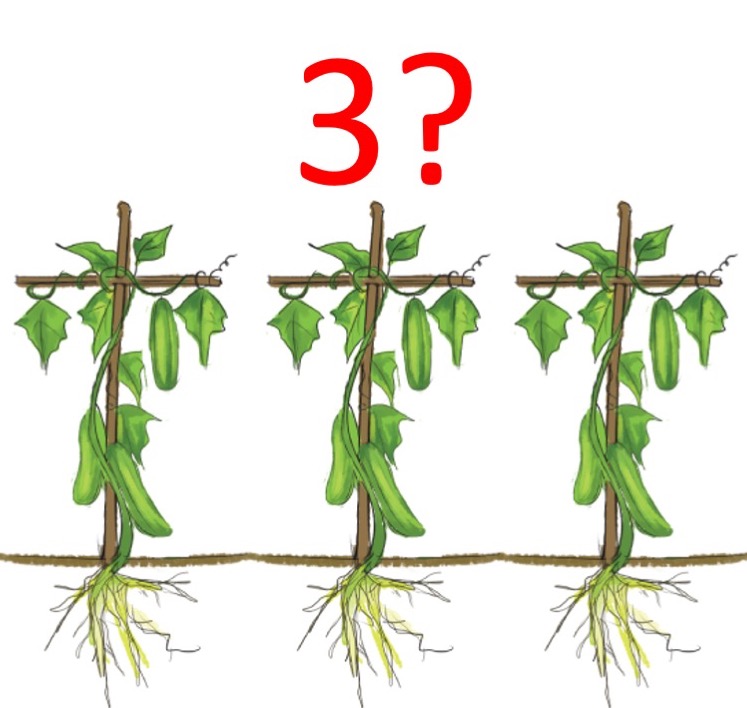 Question: I recently read that cucumbers should be sown in groups of three plants to ensure good pollination, but I don’t understand why. And does this also apply to other cucurbits such as watermelons?

Planting cucumbers (or other cucurbits) in groups has nothing to do with pollination. You can easily grow a cucumber (or a melon, squash or watermelon) all on its own and still get an excellent harvest, because cucumbers self-pollinate readily. That is, pollen from a male flower can fertilize easily a female flower from the same plant. There is no need for a different specimen nearby for pollination, although that’s fine too. All you need is a cooperative local bee!

However, there are two different traditions when it comes to sowing cucumbers.

The older fashion was to grow cucumbers on “hills,” that is, mounds of soil, usually about 6 inches (15 cm) high and 12 inches (30 cm) across, spaced well apart (often about 3 ft/90 cm). Usually 4 to 6 seeds are sown on the hill, then thinned to 2 or 3 plants, keeping the strongest specimens. The idea was that the hill would warm up earlier in the spring and allow earlier sowing; plus excess water would drain away because it was raised above the surrounding soil. Usually such plants were allowed to “run”: sprawl over the ground.

The hilling method is especially logical when the soil is heavy and drains poorly or is slow to warm up in the spring. The downside is that the fruits touch the soil and can be more easily damaged by slugs, insects or animals.

The more modern method is to simply sow cucumbers about 9 to 18 inches (12 to 45 cm) apart (this could be in a row, a circle, a square: you choose) without mounding the soil. In square foot gardening, two plants are usually sown per 1 foot (30 cm) square. Then the plants are encouraged to use their tendrils to grow up a stake, a trellis or garden netting, thus allowing the individual plants to get plenty of sunlight even if they are closely spaced.

This method is well adapted to the no-till gardening methods so popular today and is probably the simplest choice for raised beds, which by their very nature warm up early in the spring and are already well drained.

Both techniques give good results. So, really, you can take your pick.

I used to hill up my cucumbers back when I had a big vegetable bed with plenty of gardening space, following the method my father taught me when I was a kid, but since I found myself with less space, have switched to the more intensive close-spacing method.

The information above also applies to other cucurbits (squash, melons, watermelons, etc.). Only the spacing will change, as that depends on the eventual size of the plant … and some squashes and melons, especially, take up a lot of space! The seed packet normally gives recommended spacing according to the variety you are growing.

4 comments on “Do You Need to Plant Cucumbers in Groups of Three?”