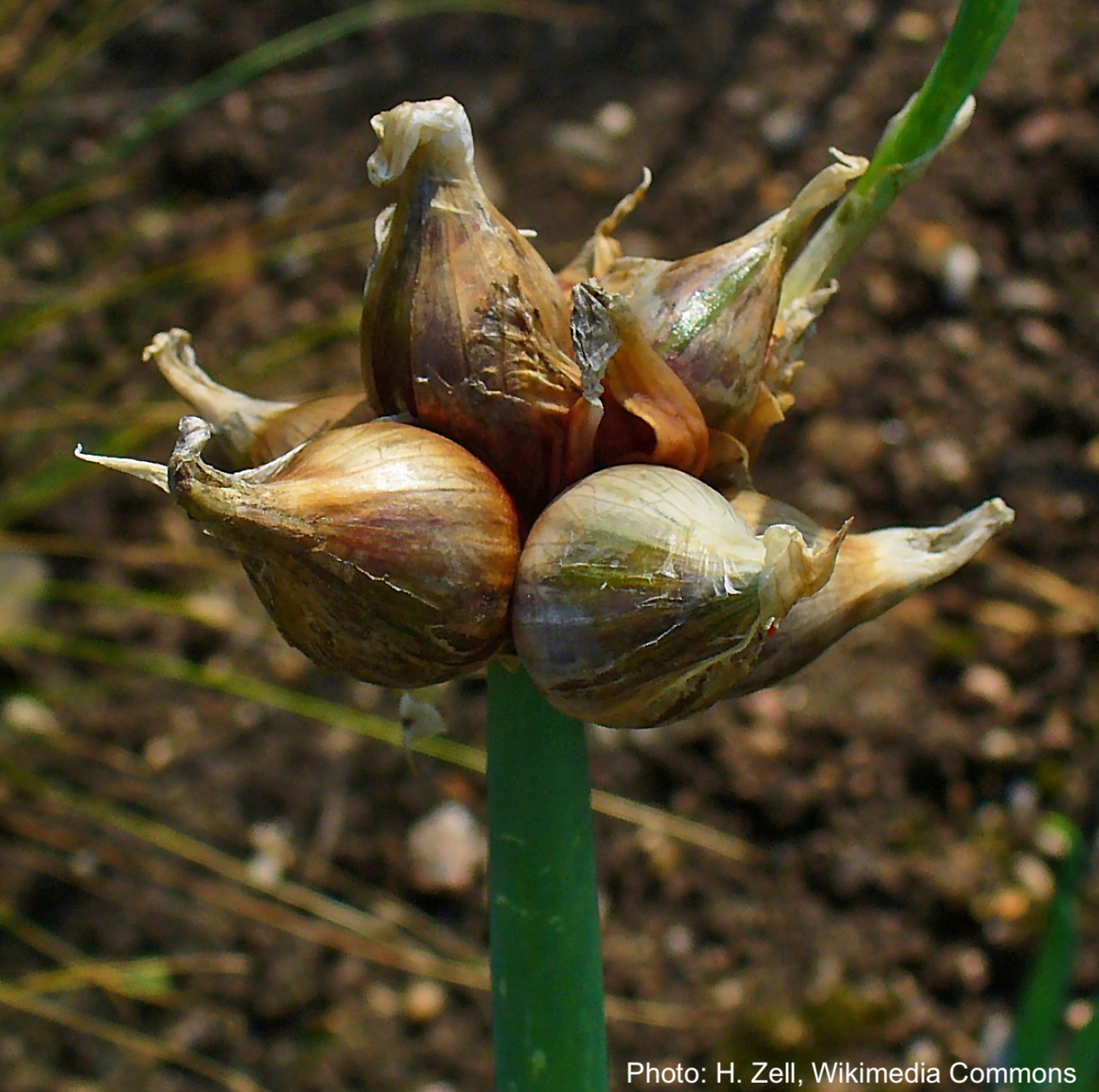 If you find growing onions from seed or sets too demanding, try the Egyptian onion, also called tree onion, top-setting onion or Egyptian walking onion (Allium × proliferum, syn.  Allium cepa proliferum), a hybrid between the classic garden onion (A. cepa) and the Welsh onion (A. fistulosum). It’s a perennial plant grown from a bulblet (bulbil and set are other names for the small bulb that is used) or division.

During the summer, it produces a flower stalk about 2 feet (60 cm) high, often twisted at the tip and on that are found several to many bulblets (often called “top sets”). It’s mainly these bulblets that you’ll be harvesting.

The “flower stalk” doesn’t produce many flowers, though. Two or three wispy stems, each with a tiny, insignificant flower, sometimes stretch out from the cluster of bulbs. The flowers are sterile and produce no seed.

An Onion That Gets Around

If this plant is also called the Egyptian walking onion or simply walking onion, it’s because of a most curious habit. If you don’t harvest the bulblets when the flower stem starts to dry up at the end of the summer, the weight of the bulblets causes it to bend down and touch the ground at a certain distance from the mother plant. There the bulblets take root, forming a new clump. Thus, the plant can “walk” through your garden.

But why “Egyptian onion”? After all, this plant (apparently, a natural hybrid) seems to have originated in Asia, not Egypt. It’s suspected that name came from the Romani people, called gypsies, short for Egyptians, who may have helped spread the plant throughout Europe.

Since the Egyptian onion is a widely adaptable and very hardy perennial (USDA hardiness zones 3 to 10), it will come back year after year, ensuring an annual harvest without you having to replant it. After a few years, when the clump becomes too dense and the number of flowering stems decreases, you can also divide the bulbs that grow in the ground (they’ll be about the size of a scallion), replanting some, but using the surplus for cooking.

The Egyptian onion is a snap to grow. Plant bulblets in a sunny spot in any well-drained soil, even sandy or very poor, barely covering them. The most logical time to plant them is in autumn (August, September or October, even November in mild climates), when the bulblets are mature, but some merchants offer plants in the spring. Note that the first year’s harvest is limited: it’s in the second and following years that you’ll get your money’s worth.

If you can’t find Egyptian onions locally (you may have more luck finding them in a farmer’s market than a garden center), try mail order suppliers, such as The Egyptian Walking Onion, Territorial Seed Company, and Southern Exposure Seed Exchange in the United States and Richters Herbs or Eagleridge Seeds in Canada.

Remember that this plant may well be listed as “out of stock” in the spring, since most nurseries sell bulblets rather than plants and those mature in the fall. Wait until late summer and it will become available again.

In addition to classical Egyptian onion, there is also a cultivar with larger bulbils, ‘Red Catawissa’, but it can be hard to locate.

Use the bulblets in any recipe that calls for onions or green onions.

You can start harvesting the very young bulbils, as big as peas, early in the summer, or wait until they are fully mature, in late summer or fall.

Sometimes small leaves appear from the cluster of bulbils at the tip of the plant in summer. You can harvest those as green onions.

You can also use the leaves from the base of your Egyptian onion, again as green onions. No more than one or two leaves per bulb, however, or you’ll weaken the plant.

Finally, you can harvest divisions either in the fall, for larger bulbs, or in early summer, for smaller ones. They have a much stronger taste than the other parts of the plant, so use them more sparingly in your recipes than regular onions.

And there you go: a perennial onion that grows all on its own, perfect for the laidback gardener!

Article adapted from one originally appearing in this blog on June 15, 2015.

4 comments on “The Perfect Onion for the Laidback Gardener!”