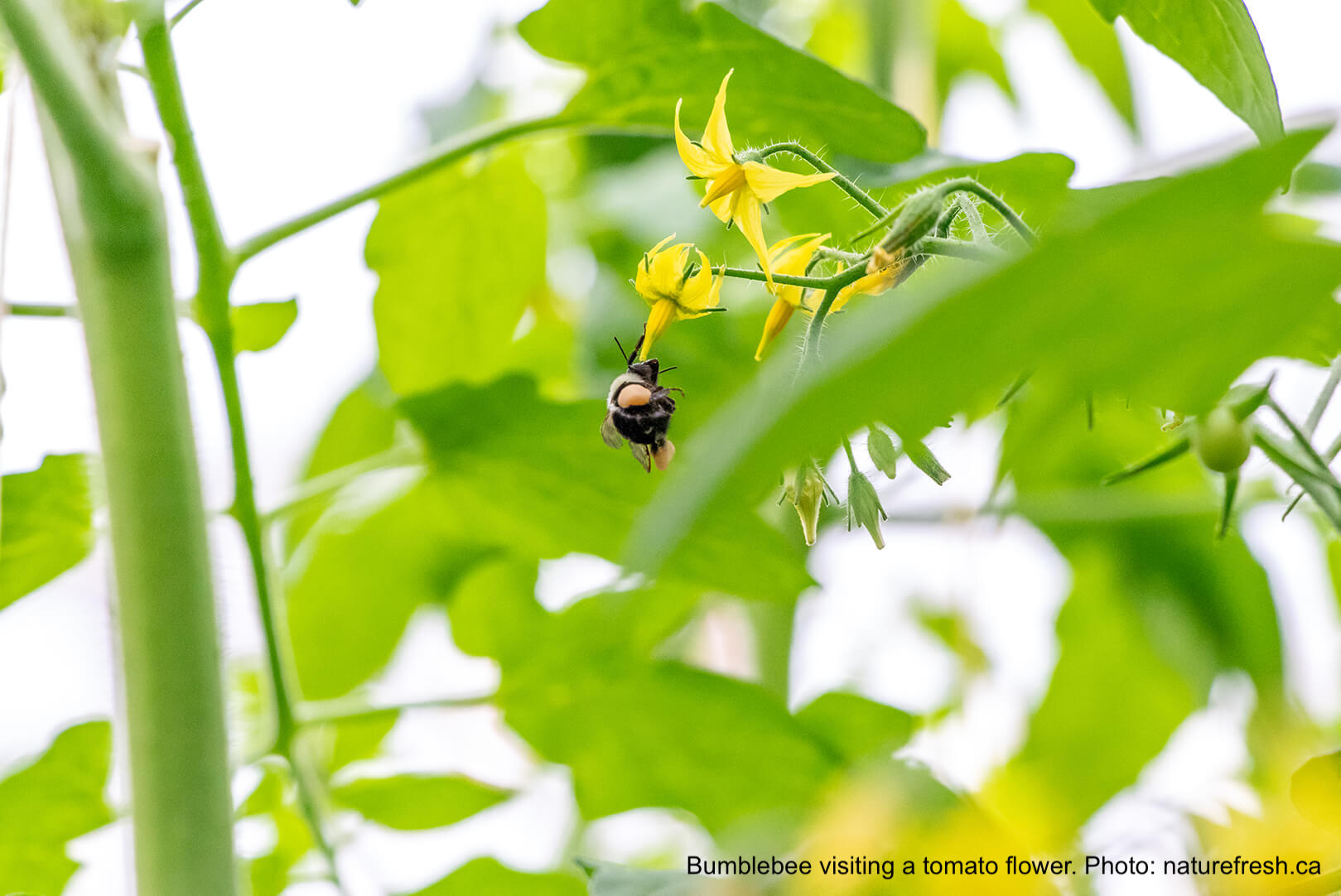 Answer: Tomatoes do indeed self-pollinate, but that doesn’t mean bees are unnecessary.

It so happens that tomato flowers have a pistil (female part) that is shorter than the stamens (male parts) and they form a protective tube around it. Thus, bees and other insects normally have no access to the pistil and can’t transfer pollen from one tomato flower to another. Instead, the pollen falls onto the stigma (the fertile tip of the pistil) of the same flower and that leads to fecundation and the formation of a fruit.

However … the pollen only makes it to the stigma if it is shaken loose. That can be done by wind causing the flowers to rock back and forth, knocking pollen loose.

Or by humans using an electric toothbrush to make the flowers vibrate.

However, some bees are great at “pollen shaking.” Bumblebees and some solitary bees are “buzz pollinators.” That is, they land on the flower and start to vibrate their flight muscles. This vibration releases the pollen, ensuring fertilization (and some of the pollen falls out of the flower where the bee collects it, so it gets its share). In fact, bumblebees do such a great job at buzz pollination that commercial tomato growers release them into their greenhouses to ensure an optimal harvest.

So, although honeybees are of little use in pollinating tomatoes, bumblebees (their bigger, hairier cousins) and certain solitary bees (Halictus spp.) can certainly be useful.

Other Self-Pollinators… That May Need a Bit of a Buzz

The situation is similar for many tomato relatives, such as peppers, ground cherries and eggplants (aubergines). (Potatoes too, but we’re rarely that interested in seeing them produce fruit, as their berries are poisonous.) All are largely self-pollinating, but can use a helping hand from buzz pollinators.

Many legumes such as lima beans, garden beans, soybeans, peas and peanuts likewise largely self-pollinate. Often, pollen is shed onto the stigma while the flower is still closed, early in the morning before bees are present. So, bees aren’t absolutely necessary, but… the flowers are still fertile and occasionally use the pollen brought by bees.

Oddly, other legumes do require insect pollination: the scarlet runner bean, for example, must be pollinated by bees, other insects or even hummingbirds.

Then you have plants that will gladly accept bee pollination, but if bees fail to show, will self-pollinate. Dandelions are well known for that, although not everyone considers them to be a vegetable. But sunflowers will also self-pollinate and produce seeds if bees aren’t present.

Of course, if your idea was that attracting pollinators to your vegetable garden wouldn’t be necessary, don’t forget that other fruiting vegetables, including most cucurbits (cucumbers, squashes, melons, etc.), absolutely require insect pollination. Indeed, they produce separate female and male flowers on the same plant and their pollen is too heavy to be carried by the winter. Thus they depend entirely on insects to carry the pollen from a male flower to a female one. Raspberries, too (technically not a vegetable, but often grown in vegetable gardens), are largely insect-pollinated. And strawberries will self-pollinate if they have to, but produce better quality fruit when insect-pollinated.

Finally, almost all fruit-bearing shrubs, trees and vines (apples, kiwis, blueberries, etc.) depend highly on bees and other pollinating insects.

If you want to avoid bees entirely, plant only leaf vegetables and root vegetables (lettuce, spinach, cabbage, carrots, beets, onions, etc.): they’re harvested for the table long before they bloom! Only if you want them to produce seeds would you normally allow them to bloom… and then you would need bees for most of them to produce viable seeds.

So, most vegetables do require pollination from insects, primarily from bees, at some point in their existence. There aren’t many that can be said to truly self-pollinate.