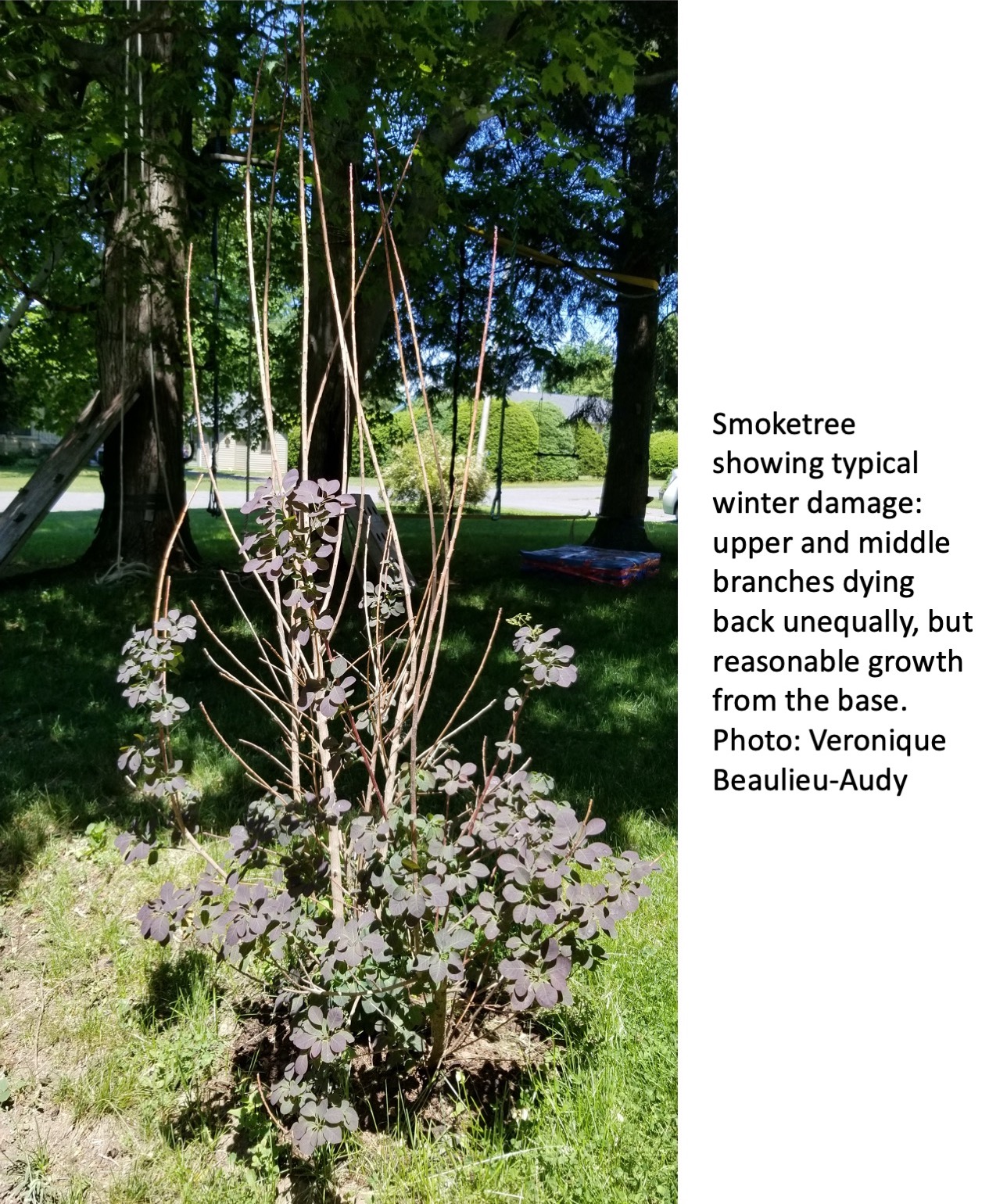 Question: I don’t know how to take care of my smoke tree. What I find on the Internet is contradictory. Every spring there are plenty of stems that don’t produce any leaves. I end up cutting them back in early summer, then the plant fills in with new leaves for the summer, but still, I have few to no flowers. Then, the following spring, the same thing happens. What should I do? I wish mine was fuller with a lot more flowers.

This shrub is only truly hardy in USDA zone 5 (AgCan zone 6) and warmer (to about zone 8: it’s not a tropical plant and does need a reasonably cold winter in order to thrive). In colder zones, it suffers winter damage and the colder the climate, the worse the damage. In good years, when the winter has been mild, sometimes only the tips of the uppermost branches freeze; in a bad year, the whole shrub can be killed to the ground.

If some of the lower branches are well protected (notably by snow cover), though, they often survive and bloom, giving you the strange phenomenon of a shrub with a layer of flowers at the bottom, foliage only in the middle and, if no pruning is done, dead stems at the top!

The good news though is that smoke tree will grow back vigorously even from a stub … which is likely what it will look like when you finish pruning it! However, the new growth won’t bloom, since flower buds on this shrub are produced from the previous year’s growth, so the attractive fluffy, hazy, smokelike hairs that follow the insignificant flowers (that I’ll call bloom in this article, lacking a better term) simply won’t occur.

You might want to consider moving your smoke tree to a new spot. It will do better (and be more likely to bloom) if placed it in full sun in a well-drained and not overly rich soil. In fact, it does best in poor soil! Look for a spot protected from the winter wind, possibly one where there is good and lasting snow cover. And avoid heavy fertilizer applications: they tend to increase damage.

Where I live, a lot of gardeners with too much time on their hands try wrapping their shrub in burlap or winter protection fabric in late fall, but they’re essentially wasting their time. This may keep the branches at the base a bit warmer, as there is always some ground heat that rises from the depths of the earth even on the coldest days, but in the middle and upper parts, insulation or no, the cold works its way right through and if the temperature is cold enough, it will kill the buds.

In your climate, the most obvious solution is to forget about bloom and grow your smoke tree as a dieback shrub. Cut it back practically to the ground early each spring, to about 6 to 10 inches (15 to 25 cm), and it will grow back densely and attractively. Most cultivars of smoketree have colorful foliage, like the deep purples of ‘Royal Purple’ or the chartreuse yellows of Golden Spirit® (‘Ancot’), and will form a lovely dense mound of attractive leaves … with no bloom.

If you want to try for bloom, wait until you start to see tiny buds appear on the stems each spring (so you know which branches are alive and which are dead), then prune back to new growth, removing all the clearly dead wood.

Smoketree often dies back very unequally, with some branches killed to nearly the ground and others still healthy and blooming sometimes to near the top, while the middle may show patches of good growth and sections that are completely bare, so the appearance can be more than uneven. You have to decide if you want to prune out the ungainly parts even if that means sacrificing a few blooms.

Of course, readers in mild climates don’t have to worry about winter damage. Their problem is often that their smoketree gets too big over time and really starts to deserve the “tree” part of its name. Indeed, it can reach up to 23 feet (7 m) tall and nearly as wide. If so, you’ll have to prune it back, remembering there really is no moment when that won’t have a negative effect on bloom. If you prune in spring or fall, that will remove the flowers yet to come, while if you prune while the plant is in its summerlong “puffball” phase, you’ll reduce the bloom of the current year. Early spring pruning does the least damage and allows the shrub to grow back faster, so ideally you’d go with that.

It should be clear now that while the information you found on the Internet appeared contradictory, that was mostly because this shrub behaves very differently from one region to the next. So, if you want to know how to treat your smoketree, turn to a site with a climate similar to yours, preferably the site of local experts who care for this plant in real garden situations, such a local Master Gardeners association.

The websites of local garden centers and nurseries are rarely of much help: they’re designed to sell plants, not to warn you of problems. Remember, they’re the ones who sold you what is basically a zone 6 plant as being a zone 4 one! (Shame on them for not mentioning the ensuing winter damage!)

9 comments on “Cold Climate Woes: Dieback on a Smoketree”