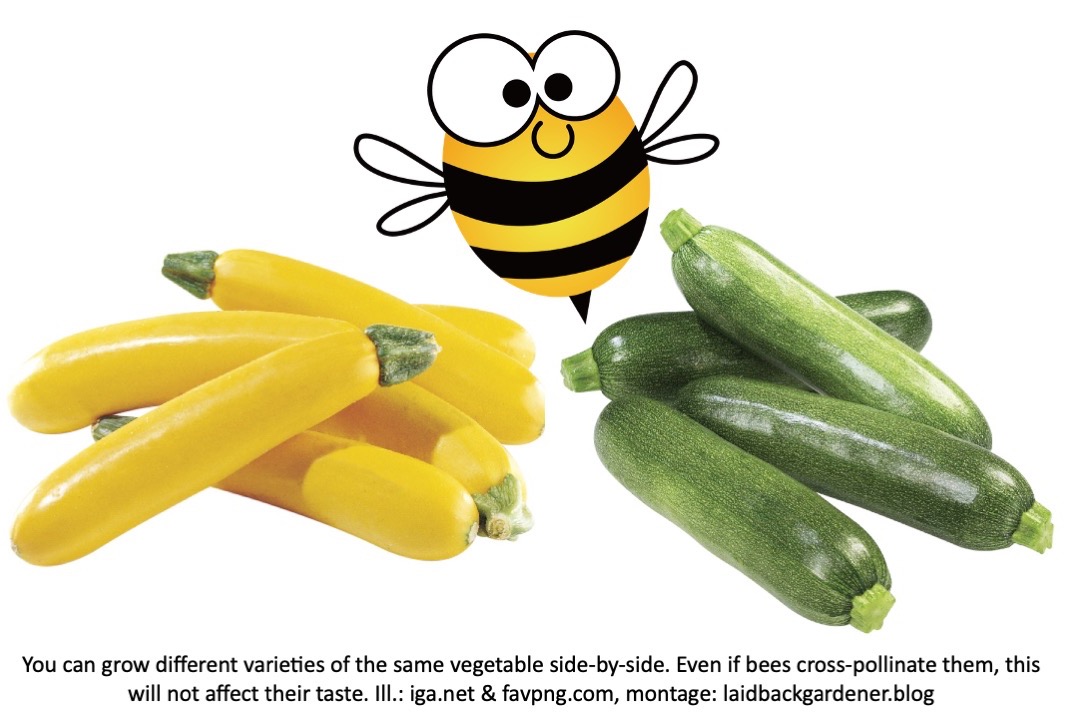 I regularly receive letters from gardeners concerned that their fruiting vegetables might cross-pollinate, that is, that by growing two types of, say, pepper, squash or tomato near one another, the pollen of one will land on the flower of another.

And yes, it can happen … but it’s almost never a problem.

It has to be understood that receiving pollen from a different variety won’t change the shape, color or taste of the fruit. If pollen from your green zucchini (courgette) ‘Payload’ were carried by a bee to a yellow zucchini like ‘Goldrush’ growing nearby, the latter would still produce its usual yellow fruits with all its habitual characteristics.

Where the cross would have an effect is in the second generation. If you kept seed from ‘Goldrush’ and it had crossed with ‘Payload’, when you sow that seed, the plants produced will show mixed traits.

However, most gardeners don’t save their seeds for resowing: they buy fresh seeds. So, they don’t have to worry about vegetables crossing … at all!

If cultivating two varieties of the same vegetable nearby doesn’t normally alter its taste, color or shape the first year, there are two major exceptions:

Corn (maize) undergoes a double fertilization: the pollen (carried by the wind in this case, not by insects) fertilizes both the ovule that will give a new plant, but also the endosperm, the grain that we eat. So yes, the taste and even the color and texture of the grain can be negatively affected by the presence of another corn variety nearby. Read Grow Sweet Corn in Isolation to better to understand this unique situation.

The other common exception is the English cucumber (greenhouse cucumber). It is parthenocarpic, that is to say, it produces fruits without being fertilized (that’s why its seeds never fully develop). But if it is pollinated by a normal cucumber nearby, it will produce bumpy, irregular fruits with seeds. That’s why it is usually grown in a greenhouse to avoid cross-pollination. Read English Cucumbers Don’t Like Company for more information.

In Most Cases, No Need to Worry!

So, relax! Other than the two exceptions mentioned, you can safely grow different varieties of the same vegetable side by side and enjoy a delicious true-to-type crop. It’s only if you save seed that you have to consider maintaining an often considerable isolation distance.

3 comments on “Vegetables Cross-Pollinating: Not to Worry!”