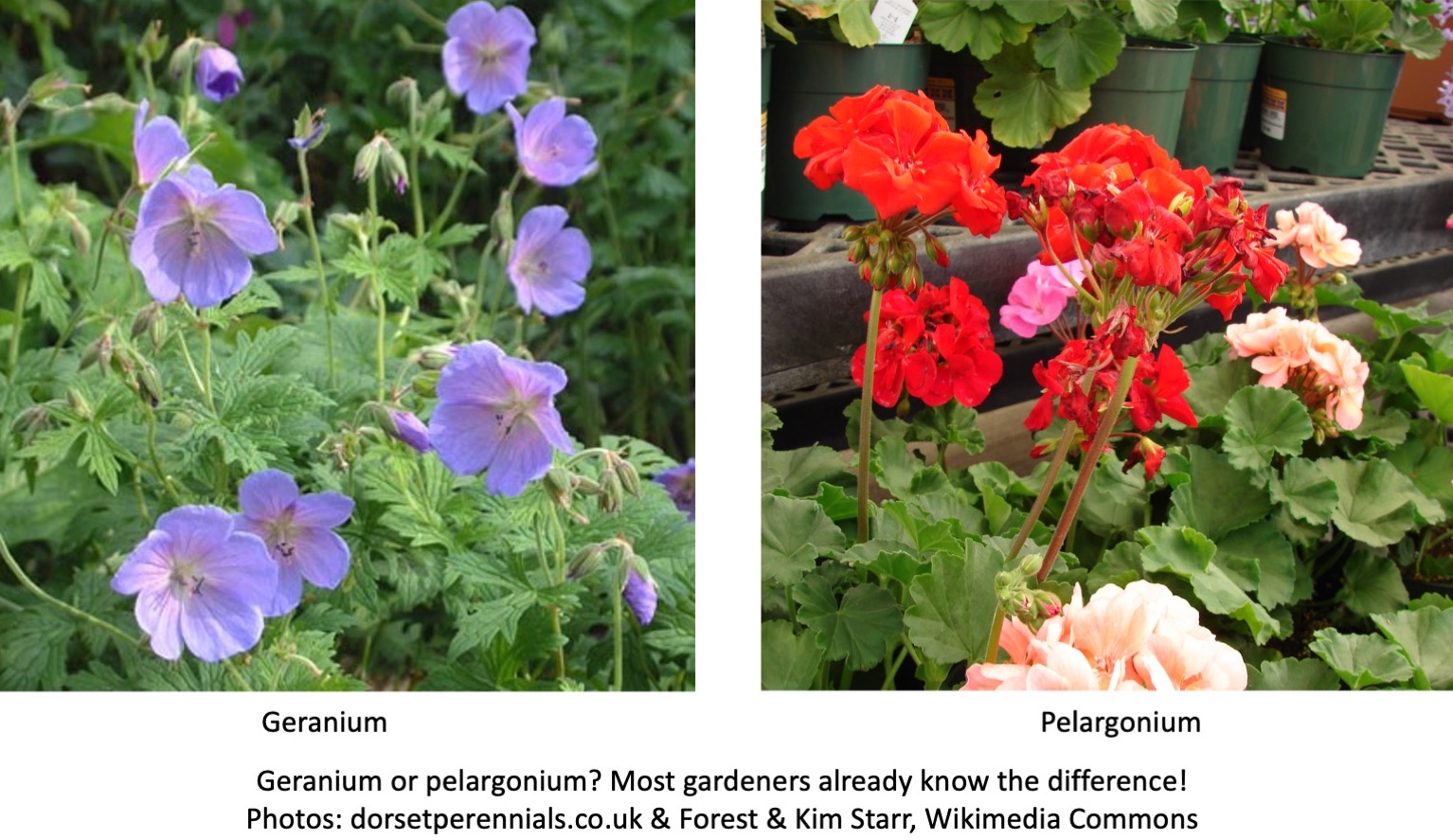 For over 230 years now, gardeners have known that their garden geraniums (zonal geraniums, scented geraniums, ivy geraniums, etc.) were actually pelargoniums, that is, they don’t belong to the genus Geranium, but instead to the genus Pelargonium.

It was a simple mistake. Linnaeus thought the plants were close enough relatives to put both types in the genus Geranium. But Charles L’Héritier saw things differently and separated the genus into two in 1789. And it turns out they are indeed only very distant relatives: you can cross a Pelargonium with another Pelargonium and a Geranium with another Geranium, but not a Pelargonium with a Geranium. The change was widely accepted even back then and still holds today.

That wasn’t so much of an issue back when gardeners grew mostly pelargoniums (the annual types). If you used the word “geranium,” everyone understood you. But for the last 50 years or so, true geraniums (Geranium spp.) have become widely popular in temperate climate gardens. I mean, who doesn’t grow either Geranium ‘Rozanne’ or G. ‘Johnson’s Blue’? To distinguish them from the tender (half-hardy) pelargoniums, few of which can survive the winter in temperate climates, we took to calling the latter “hardy geraniums.”

To Beak or Not to Beak?

Of course, the two plant genera, Pelargonium and Geranium, are related. Both belong to the same plant family, the Geraniaceae, and both have the same long, narrow, beak-shaped seed capsule that springs open when ripe and casts the seeds far and wide.

In fact, the botanical names both refer to this trait.

Pelargonium is derived from the Greek for stork, because the seed capsule is said to resemble a stork’s bill, while Geranium means crane, because it’s supposed to look like a crane’s bill. Honestly, you’d have to be a fairly serious birder to be able to tell a stork’s beak from a crane’s beak … especially if you removed the rest of the bird!

The seed capsules of the two genera, therefore, are essentially identical.

I think it’s time to stop pussyfooting around. Why not call a Geranium a geranium and a Pelargonium a pelargonium?

Again, most gardeners already know the difference and are familiar with the term “pelargonium” even if they don’t necessarily yet use it on a daily basis. For example, if I say “scented pelargonium” when giving a lecture, there are very few confused faces: almost everyone gets it right away. And this had become all the more necessary in that an increasing number of varieties in both genera are now being grown. When someone tells me about a new geranium they are growing, I always ask right away whether they are referring to a geranium (hardy) or a pelargonium (tender).

For those who don’t quite get the difference, here’s a quick summary:

1 comment on “Geranium or Pelargonium? More than 230 Years of Confusion”