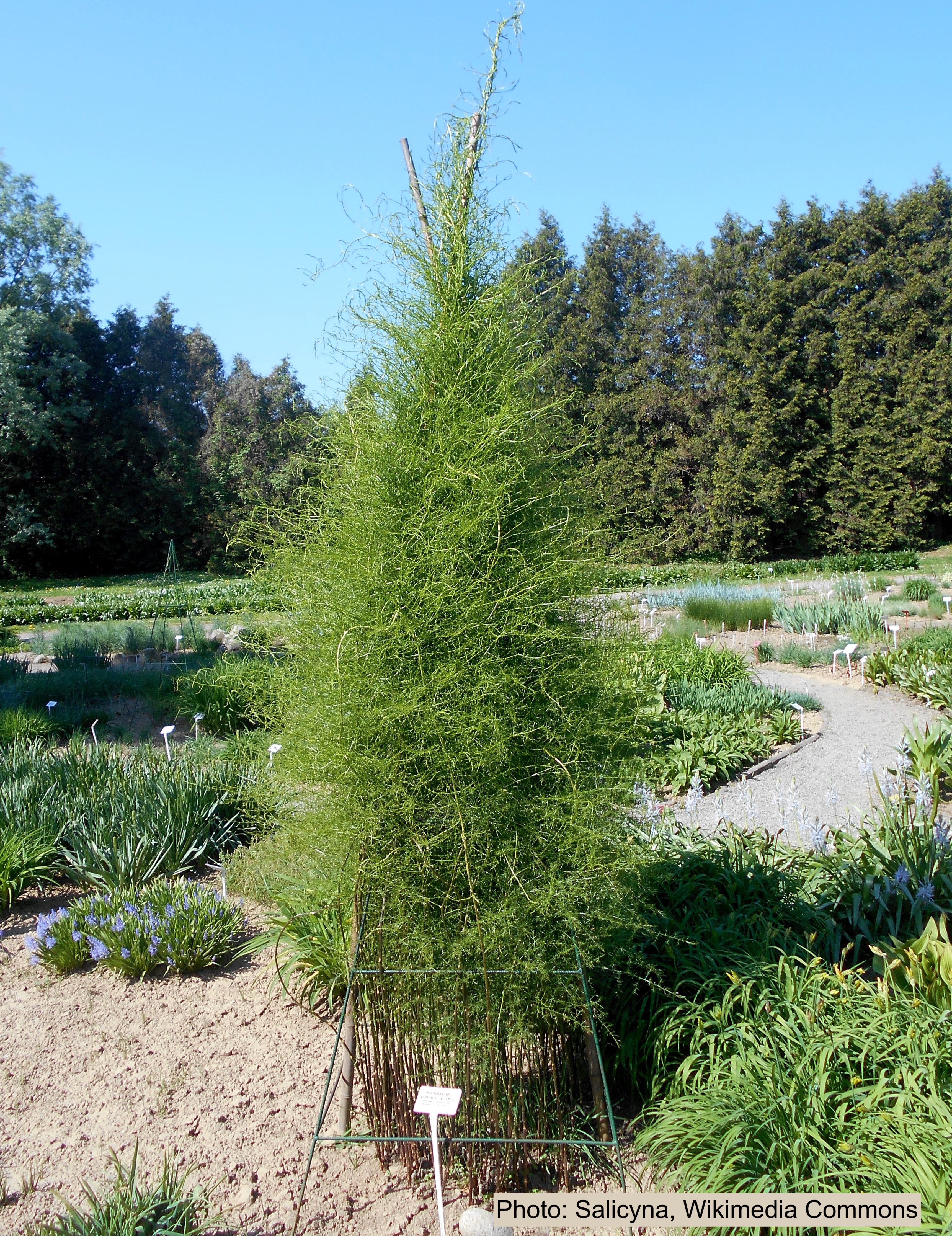 Did you know that there is a climbing asparagus? One that can easily mount a trellis, pergola or obelisk. And that it’s also edible? A true perennial vegetable! Few gardeners have ever even heard of this plant … but it’s easy to grow, beautiful and delicious and I thought you might like to know a little more about it.

I discovered this incredible plant at the Roger-Van den Hende Botanical Garden, not far from where I live in Quebec City … and I’ve been ogling it for ages. The original plant has been here for at least 45 years now and comes back faithfully year after year without requiring any care beyond an early spring trim.

Its curious combination of feathery yet dense growth immediately appealed to me … but after almost 15 years of research without finding a single plant in any of the local nurseries, nor even online, I finally took the plunge in 1997 and ordered seeds by mail. Climbing asparagus has now been growing in my garden for over 20 years and is just as beautiful as the one in the botanical garden … and I remain as enthralled with it as the first time I saw it.

As mentioned, climbing asparagus is also edible: its spears can be harvested and eaten in the spring, just as with garden asparagus (A. offcinalis), the perennial spring vegetable so many of us know and grow. The spears are a little thinner, but otherwise very similar in shape and size and the taste is the same.

So, if you are looking for an ornamental climber and a delicious perennial vegetable, but only have room for one plant, you’ve found one of the few plants that meets both criteria!

One curiosity of the climbing asparagus is that it is essentially leafless. Its twining green stems are covered with small green “needles” that appear to be leaves, but aren’t. They’re cladodes, small leaflike branches. They play the role of leaves because they do most of the plant’s photosynthesis. Very thin, soft to the touch, the cladodes cover the plant in a green haze. They’re both light and dense, because the plant has so many of them: literally tens of thousands. The overall effect is quite striking.

However, climbing asparagus actually does have leaves: it’s just that they’re inconspicuous. Look closely at the stem and you will notice, at regular intervals, small, sharp downward-pointing scales. Those insignificant little spines are all that’s left of the plant’s true leaves.

This same combination of scattered scales and numerous cladodes that replace leaves is a hallmark of all asparagus species. For example, the scales on the stalk of the asparagus you eat each spring (A. offcinalis) are also its true leaves, while the feathery needles that cover it in the summer are cladodes: modified branches. Botanical theory has it that, during its evolution, the ancestor of today’s asparagus species had to adapt to an increasingly dry climate and almost abandoned its leaves, as they lost too much water to evaporation, and instead began photosynthesizing instead through its green secondary branches that have fewer stomata (breathing pores) and thus lose less water. Over time, the branches became extra thin in order to lose the least possible amount of water to evapotranspiration until they could be classified as cladodes. And the true leaves, few in number, would either have lost all function (as occurs on garden asparagus) or become hooklike thorns designed to help climbing or scandent species to attach themselves to their support.

Through this dense yet feathery cluster of cladodes you’ll find tiny flowers. Really tiny! They are greenish white and somewhat fragrant should you decide to stick your nose into the climber’s foliage to take a sniff. They appear at the end of spring, but don’t create much of an effect.

On female plants (this species is dioecious, that is, male and female flowers are borne on separate plants), at least if their flowers are pollinated, green berries form that turn a very attractive red in late summer. These berries persist through the fall, although they turn black in winter, only disappearing as seed-eating birds find them.

The entire aerial part of plant dies in the fall, but, since it is a long-lived perennial, grows back in the spring from its barely buried crown.

How to Grow Climbing Asparagus

This plant, native to Southeastern Europe and Central Asia, is very easy to grow and above all, very long-lived. It doesn’t seem mind the cold and it adapts to almost any soil condition, from rich loam to sandy, clay or even stony soil. It also seems equally at home in both acid and alkaline soils. It grows readily even in very dry soils (this asparagus is a xerophyte and often grows in very arid areas in the wild). However, one thing it won’t tolerate is poor drainage. It’s real enemy is not drought, but excess water.

The plant climbs in two ways: by its twining stem and its spines.

The twisting stems do most of the work. Like many other twining climbers, though, need a fairly narrow support to climb on: preferably less 1 1/2 inches (4 cm) in diameter. They can’t wrap around tree trunks, thick stems, posts or other wide supports. On the other hand, the numerous twining branches intertwine readily, so once a single stem has managed to get a good grip on the support, others will follow without any help from you. You may need to direct a stem or two to cord or netting to start it on the climbing process, but once it’s underway, the plant will take care of itself.

As for the spines, they do only a very limited job when it comes to climbing, helping the plant to fix itself to tree bark or other rough surfaces when the twining stems are unable to twist around the support.

If you want berries, make sure you have at least one male plant and one female plant. Obviously, a male plant can also pollinate several females: at least 8 to 10. Bees are the main pollinators.

The problem is that the few nurseries who offer this plant, even though they always highlight the colorful berries in their plant description, never give the sex of the plant they’re selling (probably because they grow their plants from seed and don’t know). And, of course, if you grow your plants from seed yourself, you’ll likewise find young climbing asparagus plants all look alike. Even in bloom, the two sexes are hard to tell apart. The usual technique is simply to plant several climbing asparagus in the hopes of ending up with plants of both sexes!

Since the stems die in the fall, turning a pretty straw yellow before turning beige, you can cut them back to the ground at that season if you want. Personally, I just leave them standing: the winter effect is quite nice, especially when it’s a female plant decorated with berries or when a bit of snow clings to it. Then in the spring, the new stems can take advantage of the dead ones from the previous year to climb more quickly and soon hide them completely. The old stems decompose and disappear on their own over the summer. So, since the plant is “self-cleaning,” why waste time tidying up?

Otherwise, climbing asparagus needs little pruning, but, of course, you can cut back any wandering stems that go where you don’t want them to, no matter what the season.

If you want more climbing asparagus, theoretically you can divide yours into separate plants, but do arm yourself with an ax or saw: the thick, almost woody roots of this plant are difficult to pull apart.

In general, though, this plant is propagated by seeds. In fact, while you might find it hard to locate plants on the market, the seeds are quite readily available, at least on the Internet.

This well-disciplined, non-invasive vining plant can be interesting to use where you’re looking for a climber that is taller than it is wide, as that creates the effect of a green column. Since it needs a relatively thin support, it’s easiest to let it grow up a thin-slatted trellis, a chain-link fence, an obelisk, netting, etc. You can also let it work its way up and into a shrub or a small tree.

If you don’t offer it any vertical support—if you plant it in the center of a flower bed, for example—the stems will twist around each other and manage to reach a certain height by intermingling and leaning on each other, thus creating a feathery dome probably wider than it is high.

The feathery stems of this plant also make lovely additions to flower arrangements and are popular with florists. Just watch out for hidden thorns when handling them.

This asparagus does not seem to have any significant enemies.

While asparagus beetles can do great damage to garden asparagus, I have not seen any mentions that these insects attack climbing asparagus, nor have I seen any cases of infestation in the plants that I have seen in other gardens nor in my own. This is surprising, as the two plants are clearly closely related and you’d think they’d share insect enemies, but apparently not.

In fact, this asparagus is generally considered insect- and disease-resistant and likewise offers little appeal to deer, rabbits and other herbivorous mammals.

Climbing asparagus: an unusual ornamental and edible plant that might just deserve a place in your own garden!

14 comments on “An Asparagus That Climbs? Who’d a Thunk?”