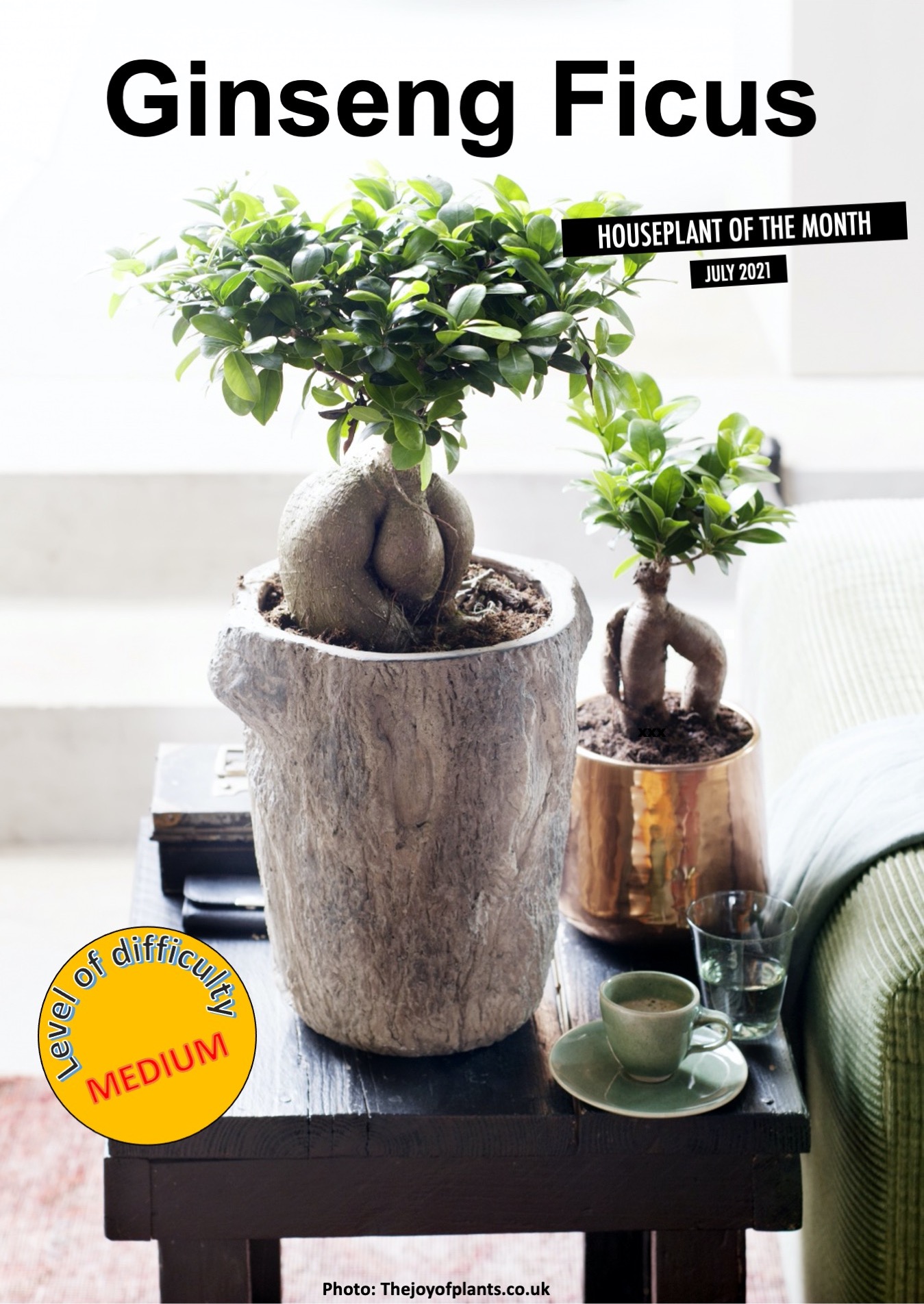 The ginseng ficus—or pot-bellied ficus—is a most unusual houseplant. With its fat, multi-stemmed “trunk” and numerous small leaves, it looks a lot like a bonsai, but it’s one “bonsai” that requires very little special care.

The plant behind the ginseng ficus is Ficus microcarpa, called variously Chinese banyan, Malaya banyan, Indian laurel and small-leaved fig. It is often mislabeled F. retusa, a different species that is rarely grown indoors or F. nitida, actually another name for the popular and very similar benjamina fig or weeping fig (F. benjamina).

F. microcarpa is indeed a fig, as are all species in the genus Ficus of some 850 species, so is related to the common fig (Ficus carica), although the two are not very similar in most aspects and certainly the tiny round fruits of F. microcarpa are not normally eaten (not that they’re toxic, but there just isn’t much to eat!). Among the things they have in common, though, are a milky white sap (latex), stipules that protect new leaves and a very complex pollination system involving specific miniature wasps, described in the article Figs: Possibly Nature’s Strangest Fruit.

F. microcarpa is a large spreading tree in the wild, reaching in the open about 40 feet (12 m) in height and diameter, often looking much like a large green mushroom with stilts, the stilts being prop roots, which the tree produces under situations of high humidity. It can reach up to 100 feet (30 m) tall in a forest, but much less in the open. The tree is densely covered in smooth, oblanceolate evergreen leaves about 2-2.5 inches (5–6 cm) in length. It often starts its life as an epiphyte, germinating on tree trunks and branches (and also rock faces and buildings), later rooting to the ground and forming a trunk. Indeed, it’s among the famous “strangler figs” that can surround their host tree and kill it.

This species, already widespread in nature (throughout Southeast Asia and Oceania into Australia, including India, Sri Lanka, New Caledonia and southern China), has been widely planted as a shade tree in tropical and subtropical areas throughout the world. Since it produces massive numbers of thick roots that can lift sidewalks and pavement, it’s wise to choose a spot carefully before planting it outdoors in warm climates. It has even become invasive in areas where its required wasp pollinator, Eupristina verticillata, has also been introduced.

But What About the Ginseng Ficus?

You must be wondering why I’m writing about a big outdoor tree when the ginseng fig is a small indoor houseplant. Well, it turns out it’s the same plant, simply grown differently.

The ginseng ficus is actually two plants in one, one grafted on the other … and both are selections of Ficus microcarpa. The commercial production of this plant is concentrated in Asia, especially China and Taiwan.

The base is formed from a standard variety started from seed or cuttings and grown in the ground under tropical conditions. It naturally forms several thick, carrotlike roots as a water storage mechanism. After two years or so, the young trees are dug up, their top growth is cut back to a stub and all the secondary roots are pruned off, leaving only the thick ones. Even those are shortened so they will fit into a pot.

What’s left of the plant is now potted up leaving about the top half of the root system exposed. It will gradually “toughen up,” changing from its original soft yellow exterior to a thick, barklike appearance: the future “trunk” of the ginseng ficus. Underground, new absorbant roots will form to replace those removed.

Slips of a denser-growing, smaller-leaved variety with short internodes like ‘Green Island’ are then grafted on top of the stub so the new plant will take on a thick, treelike appearance. The plant is then allowed to grow for a few months until it reaches an attractive, saleable look.

Then the plants are sent bare root to Europe where they are potted up, then shipped for sale to European and North American houseplant enthusiasts.

The ginseng ficus is in no way related to Asian ginseng (Panax ginseng): they belong to two different families (Moraceae for the ficus and Araliaceae for the ginseng). Rather, the thick, splayed roots of the fig look a lot like those of a ginseng plant.

The word ginseng itself is from a Chinese term meaning “person root”. The Chinese felt the forked roots looked like a person’s legs and called it rénshēn, rén meaning “person” and shēn meaning “root.” Over time, the pronunciation of rénshēn became ginseng or ginnsuu.

Not Really a Bonsai

Although average home gardeners might consider a ginseng ficus a bonsai, bonsai experts do not. Certainly, they would never chop the top off a plant, leaving a huge scar still visible years later. And they often find the root formations garish. You could, though, find a specimen with less blatantly disproportionate roots and, by careful selection and pruning, hide the scar tissue so that you could turn it into a bonsai.

Most bonsai masters, though, would start over from a stem cutting and begin training the young plant into an acceptable shape starting in its youth.

Caring for a Ginseng Ficus

The ginseng ficus is a fairly straightforward houseplant to grow. Mostly, the same care you give your other plants will suit it perfectly well. Here are the details.

Light: Intense light or even full sun is best, but it will do very well in medium light with at least a few hours of sun a day and adapts somewhat reluctantly to low light, although won’t appear as dense there. It grows beautifully under LED and fluorescent lights. Lack of light, especially in winter, can lead to leaf loss, stem dieback and an overall thin appearance.

It will appreciate a summer outdoors in full sun, once you’ve let it adapt to the change.

Rotate the pot regularly so all sides get their fair share light from the window.

Watering: Water thoroughly when the soil is dry to the touch. It does store some moisture in its thick roots, but will not necessarily recuperate well if you let it dry out too completely too often.

Watering frequency will necessarily vary according to all sorts of factors: light intensity, season, temperature, air humidity, size of the pot, etc. Some fairly large ginseng figs are stuffed into ridiculously tiny bonsai pots and may require watering several times a week; others easily go a week or even two between waterings.

There is no dormant season, but growth may slow down in the winter, reducing watering needs.

Humidity: Plants can adapt to low air humidity, but do much better in humid air. Under high humidity, above 75% much of the time, they’ll produce aerial roots that can thicken and add to their interest. (Bonsai growers often place them in terrariums for extended periods or use a mist system to stimulate this kind of growth.)

Temperature: Established trees outdoors are known to take temperatures down to freezing with little damage, but potted plants are not quite so tough. Try to keep temperatures above 55˚C (13˚C) at all times.

Grooming: Remember that this plant that looks so unique when you buy it young and in a small pot is actually a forest tree and will continue to grow all its life. Ideally, you’d keep it quite modest in size by pinching or pruning back any branches that are getting out of hand. One technique you can try is to cut back stems by half or even more every spring. Or prune regularly, as needed, during the spring through early fall growing season.

Many plants will produce new growth from the stub left at the tip of the rootstock, that is from below the graft, resulting in genetically different branches with larger, paler leaves and stems with a larger internode. If allowed to grow, your plant will have dense, thick, dark green leaves above and in the center, and a totally different appearance below and all around. Ideally, therefore, you would cut off any stems arising from the rootstock as they appear.

Prune roots that extend through the drainage holes. Whether or not you remove aerial roots from the branches (if any appear) is your decision.

Fruits are not common on indoor plants, but when they do appear, can be left on the plant as an additional attraction. They generally fall off on their own as they age.

Repotting: Many people simply don’t repot their ginseng ficus: you often see specimens that have been in the same pot for a decade … but they’re generally in decline. It’s best to make a habit of repotting them every 2 or 3 years (more often if your water source is very alkaline), removing most of the old potting soil and cutting back any encircling roots.

You can repot into the same size pot if you want to control the plant’s growth. If you move it to a bigger pot, it will likely increase in size.

Repot during the growing season (ideally, in spring). You can use bonsai soil, potting soil, cactus soil or even orchid mix: any mix that drains well. After repotting, water carefully for the first two weeks until roots begin to regrow, keeping the plant out of full sun during that time if at all possible.

Multiplication: This plant is easy to grow from stem cuttings or air layering done during the growing season. You can root the stems in water, but you’ll have better results rooting them in potting mix. Cuttings root best under high humidity, such as under a transparent dome or inside a clear plastic bag. Remember though that cuttings will not give you the “pot-bellied ficus” effect of the original plant, but rather normal stems and a treelike appearance.

Berries grown from plants indoors (and indeed, even outdoors where its required symbiotic wasp pollinator is absent) will contain no fertile seeds, but seed collected from trees that are pollinated or purchased from reliable seed sources are easy to grow.

Insects and Diseases: This fig is not considered particularly subject to insects and diseases indoors (although thrips can be a nuisance outdoors in some climates), but mealybugs, scale insects and spider mites remain possible problems. Isolate new plants to help prevent spread and isolate and treat any plants that do become infected.

Toxicity: The sap of Ficus microcarpa is a known irritant and some people also develop an allergy to it. It would be wise to wear gloves and glasses or protective goggles when pruning. The leaves are poisonous to dogs and especially cats if they eat too many. It’s best to keep this plant out of the reach of children and pets.

That said, birds love the fruits and, indeed, they, along with fruit bats and monkeys, are the main dispersal agents of Ficus microcarpa seeds in the wild.

The ginseng fig: a bit of an oddity in the plant world, but hey! We gardeners like oddities, don’t we!

1 comment on “Ginseng Ficus: The July 2021 Houseplant of the Month”