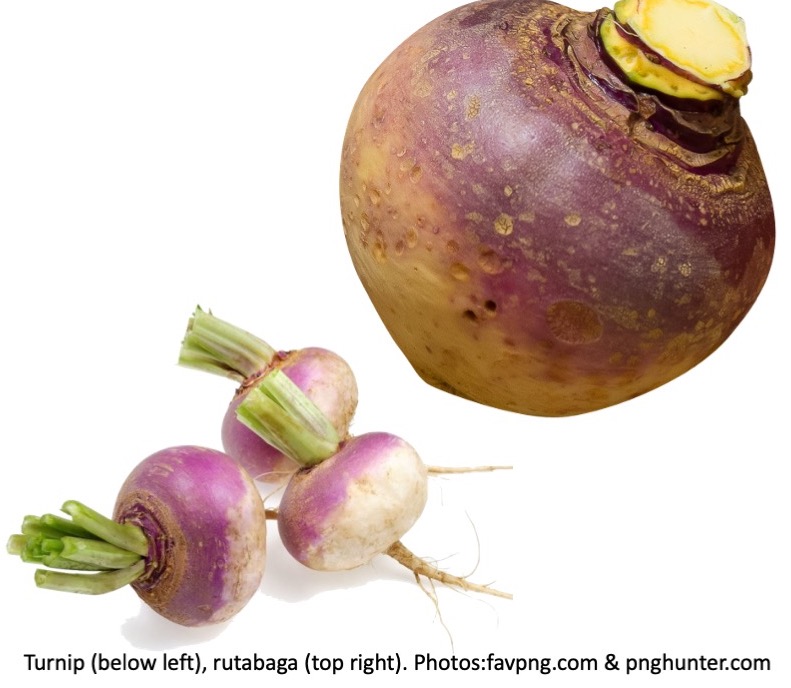 Question: I read with interest your article Why Didn’t My Turnips Produce a Bulb?, which made me think yet again about something I never quite understood. What is the difference between a turnip and a rutabaga? They look pretty similar to me!

Answer: The two members of the cabbage family actually are different plants, although they have a lot in common, including not only most of their genes, but also a thickened, often rounded taproot and edible leaves.

The turnip is a thick-rooted selection (Brassica rapa rapa) of wild mustard (B. rapa), a highly variable and wide-ranging Eurasian plant that has been developed into a whole range of different edible plants, including bok choy (B. rapa chinensis), field mustard (B. rapa oleifera) and Chinese cabbage (B. rapa pekinensis).

The form with an edible taproot (the turnip) is believed to have been developed over 2,000 years ago and was known to both the Greeks and Romans. Essentially, through generations of selection, thick-rooted forms of the wild species, which originally only had a narrow taproot, were developed and grown, both for human consumption and as livestock fodder.

The rutabaga (Brassica napus napobrassica) apparently originated spontaneously in Europe sometime in the late Middle Ages (although the first printed reference to it only appeared in 1620), when a cabbage (Brassica oleracea), a different, but closely related species, crossed with a turnip (B. rapa rapa).

This is an unusual cross, as the parent plants have different chromosome numbers (18 for cabbage and 20 for turnip) and that usually results in sterility, but the hybrid plant spontaneously produced tetraploid seed with 38 chromosomes, resulting in a plant reproducible by seed.

Farmers recognized the value of the larger-rooted rutabaga and began growing it, especially in Scandinavia. It was introduced into the rest of Europe through Sweden in the late 18th century, hence the name: rutabaga comes from the Swedish term rotabagge for lumpy (bagge) and root (rot). For the same reason, it’s also known as Swedish turnip or swede in many areas.

If you’re just out shopping for vegetables, you could simply think of turnips as being small and light and rutabagas as being big and heavy!

3 comments on “What’s the Difference Between a Turnip and a Rutabaga?”