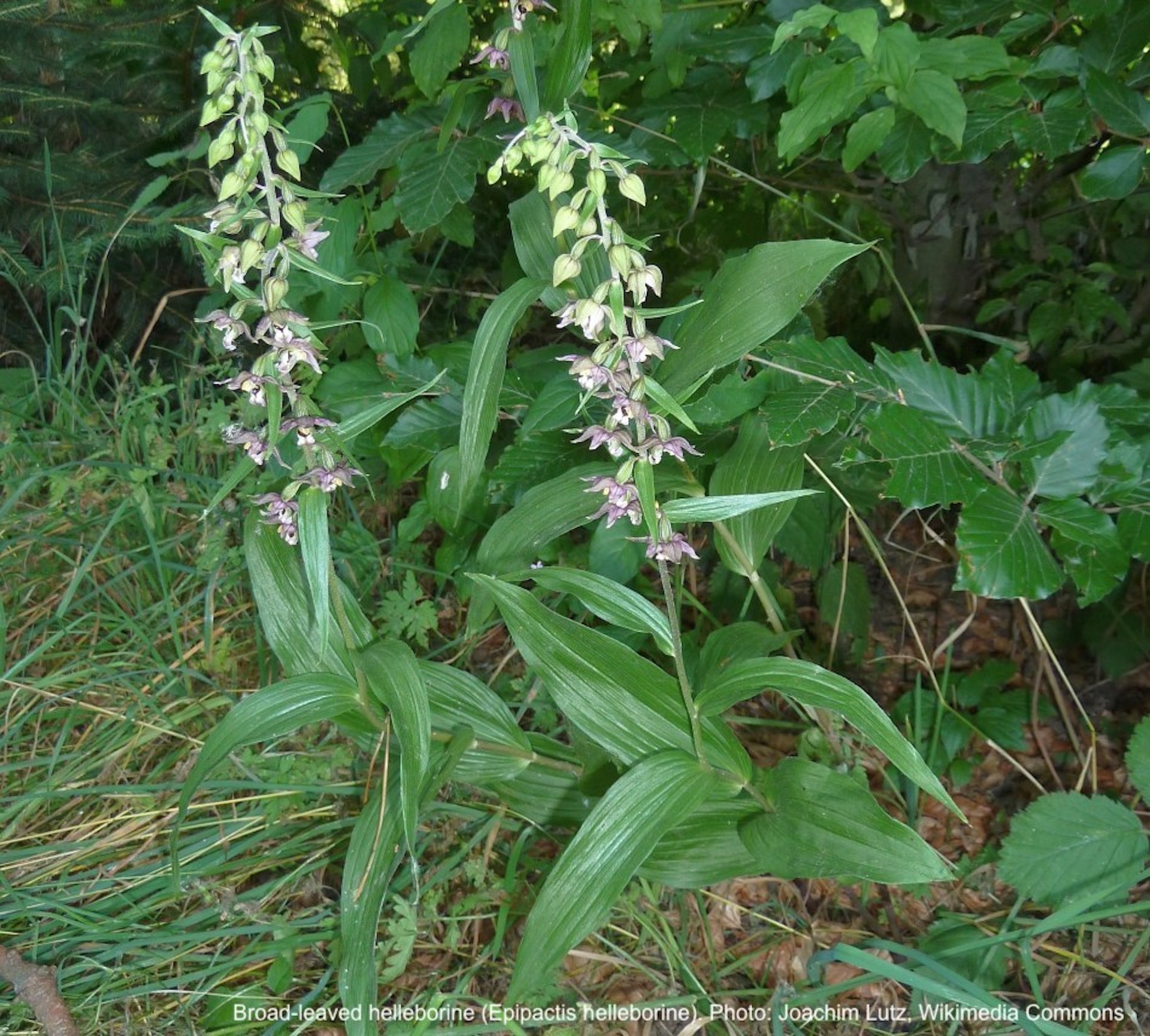 The following article was first posted to this blog on June 26, 2018. I’m reposting it today because I’ve been receiving a lot of questions about this plant recently, so obviously there is an interest, especially since it appears mysteriously in both forests and gardens.

Orchids are such desirable plants that’s hard to imagine there are any that don’t attract many favorable reviews … but there is indeed one and it’s Epipactis helleborine or broad-leaved helleborine. This widely distributed Eurasian terrestrial orchid long ago made it to the New World where it has spread like wildfire thanks to its very fine wind-borne seeds and is now abundant throughout eastern North America, from Newfoundland to the Great Lakes region and south to Tennessee. It is also locally common in many regions of the West Coast and, to a lesser degree, the Midwest.

Most people don’t realize it’s an orchid, though. They just see a plant they didn’t plant … and want it gone!

The first thing you see are the curiously pleated leaves in the spring that you might confuse with that other accordeon-leaved plant, false hellebore (Veratum spp.), but which is in no way related.

It forms an upright stem from 1 to 2 ½ feet (30 to 80 cm) tall, arching at the tip when it bud, with broad, pointed, parallelly ribbed leaves.

The colors are variable: just in my own yard, I have mostly green ones, some pinker ones and a few that are quite pretty in purple. The labellum is often a different shade from the pointed tepals.

I find it seems to love mulch and somehow manages to germinate in the most carefully mulched beds, one of the few plants able to do so.

Yes, you can call this a weed if you want. I don’t. I actually like it. And although it does show up in the shadier parts of my yard (it seems to prefer shade to sun), it’s not exactly a very obtrusive plant, nor does it take over. It just pops up here and there, even in spots totally dominated by tree roots where little else will grow.

It is apparently hard to get rid of. Certainly, pulling, hoeing or digging it just seems to make things worse, as the slightest bit of rhizome remaining will produce a new plant. It’s said to be highly resistant to herbicides too, although I have no proof of this, as I’ve never tried such products.

If you really want to get rid of it, don’t hoe it, but rather cut it back and keep cutting it back each time it resprouts. If it shows up in a lawn, just mow it down. If you constantly cut off its leaves, it won’t be able to carry out photosynthesis and will (eventually) die. You’ll actually find it isn’t very persistant if you treat it that way.

I just leave it be. It’s just not a dominant enough plant to be worth fighting … and it’s pretty enough in its modest way. I suggest learning to like it!

12 comments on “The Orchid Nobody Wants”