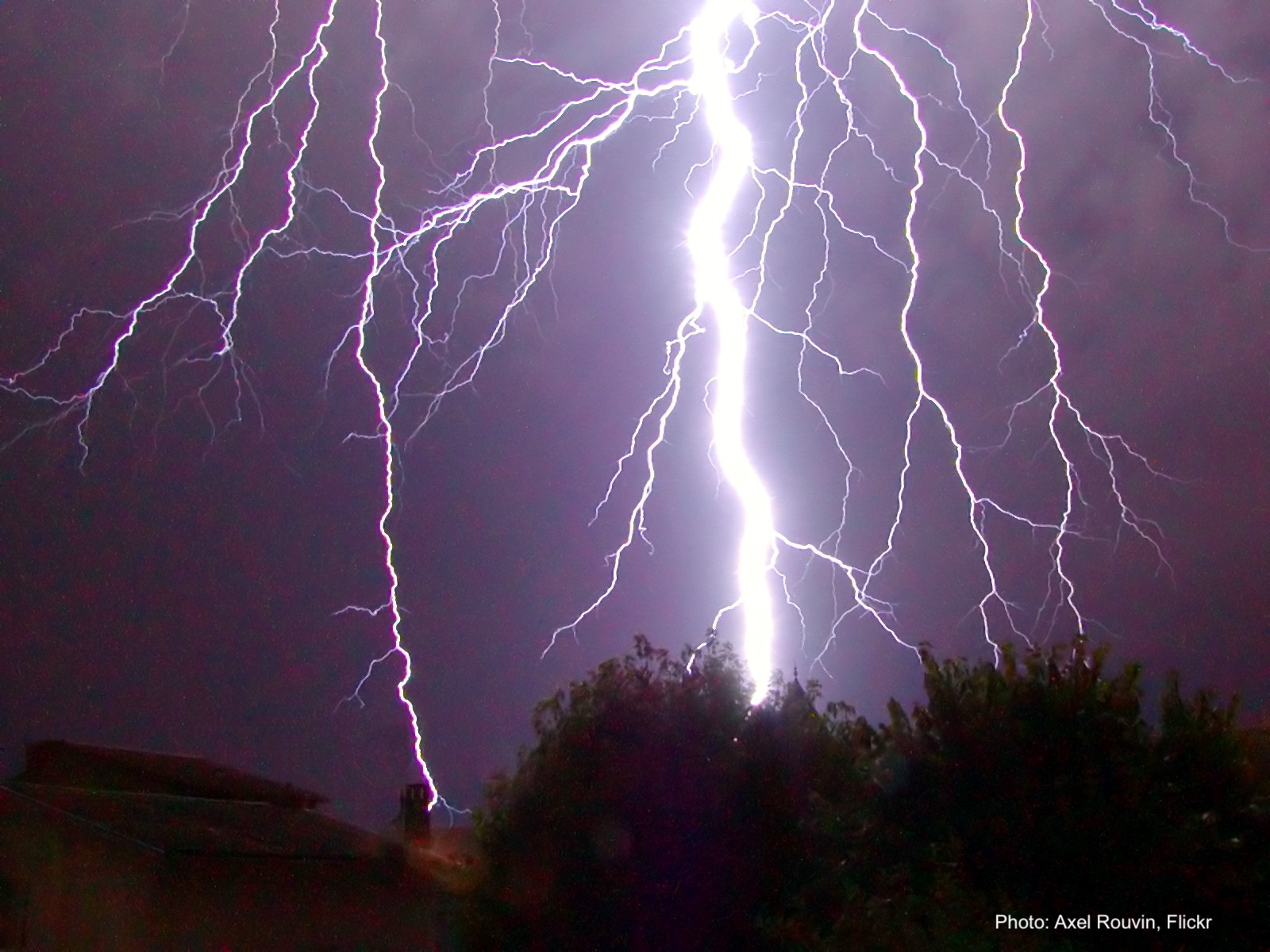 Lightning often strikes the highest object of a given sector … and that is frequently a tree. The trees most likely to be hit are those that stand alone, rise above other trees or are close to water. Oaks, elms, pines, spruce, poplars, maples and ashes are considered most likely to receive a lightning hit.

This might seem surprising given that wood is not a good conductor of electricity. However, the sap just under the bark certainly is. Lightning then descends inside the trunk, from the top down and into the roots, carrying up to 100 million volts of electricity and heating the sap until it vaporizes.

When a tree is struck by lightning, it may simply be blown apart when the sap expands, but generally the damage is much more discreet. You’ll often see a long split in the trunk or an equally long strip of bark ripped off, but sometimes there is no outward sign of damage except a few branches whose leaves wilt over the following days … unless the tree simply dies, which case all the leaves will wilt and dry up.

Of course, if the tree was soaking in water from a heavy rainstorm, there’s also the possibility that the lightning traveled down the outside of the bark, causing minimal damage and few to no long-term effects. But that’s fairly unusual.

Some trees recover from a lightning strike, but most do die, sometimes directly, but often from “secondary trauma.” The open wound becomes infested with fungi or insects (borers are attracted in large numbers when a tree is struck by lightning), which can lead to a slow death that can take several years.

If Your Tree Is Hit

If you realize one of your trees has been struck by lightning, get a certified arborist over within a few days to determine the best treatment. You need to act fast, as the tree will start to react to its new state within a week or so. Sadly, the expert might well suggest cutting it down, but sometimes, especially if less than 20% of the roots are damaged, trying to saving it could be worthwhile.

The treatment is fairly simple. The wound needs to be cleaned of shards and torn bark so it can compartmentalize well, some damaged branches may need to be removed and fertilizer should be applied to stimulate root regeneration. Do not apply a pruning sealer (paint, paste or wax): this type of product is no longer recommended and applying it will just make things worse.

In the case of a tree of great value, such as a historical tree or a tree of symbolic or sentimental value, it may be worthwhile protecting it by installing a lightning rod … before lightning strikes, of course! This is a fairly expensive treatment that should be performed by an expert in lightning rod installation, but if the tree is “priceless,” the investment will be worthwhile.

You often see trees thus protected in major parks. For example, Longwood Gardens, in Pennsylvania, protects several of its trees, some of which are centuries old.

Article originally published in this blog on August 23, 2016.

2 comments on “When a Tree is Struck by Lightning”