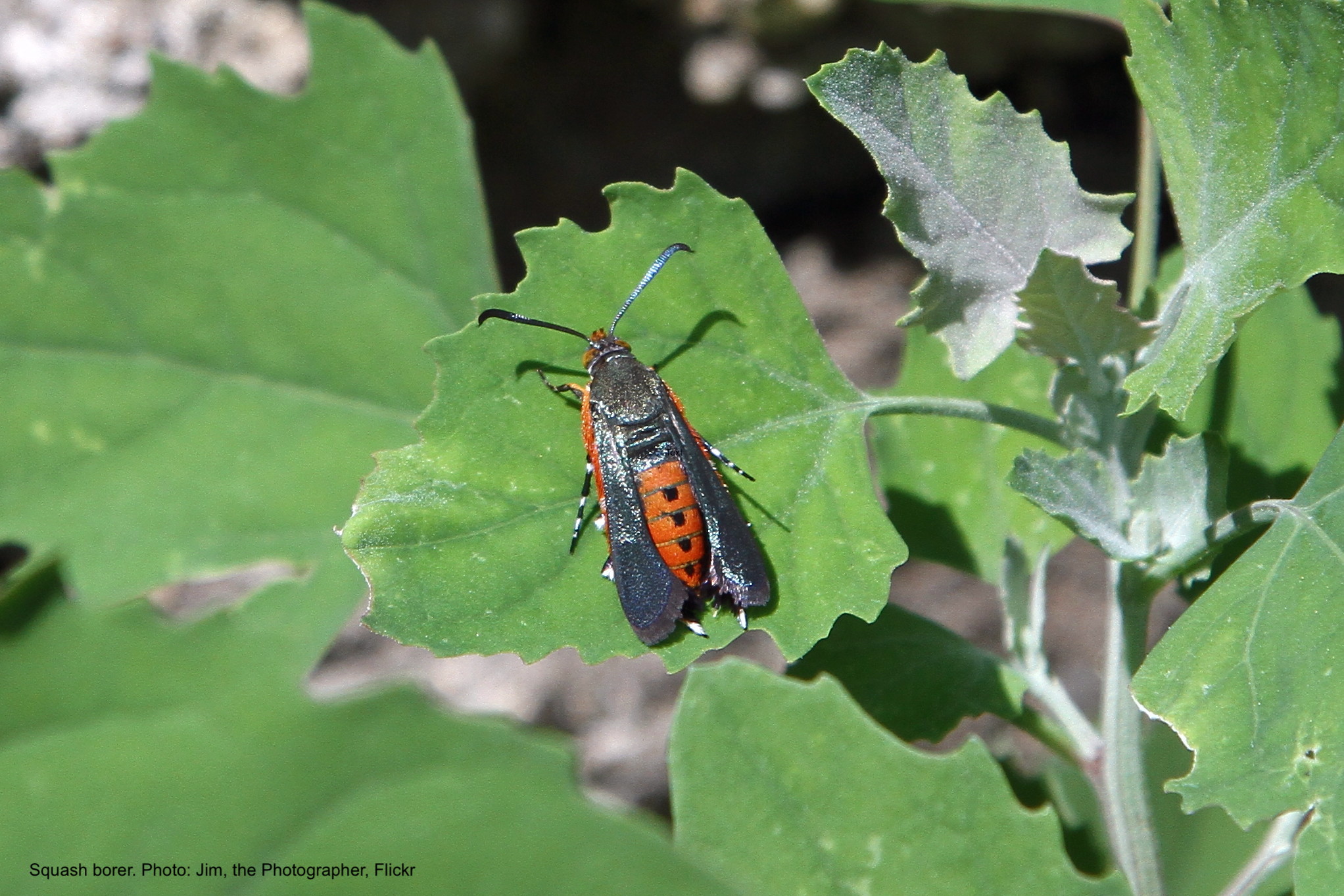 This is a new insect for me. Although native to North America, mostly east of the Rocky Mountains, it hasn’t been seen this far north (Quebec City) before. Well, thanks to global warming, it’s now up my way too … as if we didn’t already have enough insect pests to deal with.

The adult squash borer (Melittia cucurbitae) is a 5/8 inch (16 mm) moth, but a very unusual one.

First of all, it’s diurnal (active during the day) while most moths are nocturnal. And it has very unmothlike clear wings folded narrowly with a greenish to black sheen, plus a hairy black and orange body and leg cases, meaning it is more likely to be mistaken for a bee or a wasp than a moth.

The adult feeds on flower nectar and is mostly likely to be seen visiting your garden’s flowers. The female, though, sneaks away from feeding to lay eggs at the base of the stems of squash plants (Cucurbita spp.), rarely on other cucurbits (melons, cucumbers and watermelons).

In commercial fields, eggs tend to be spread out over plants along the outer edges, so plants in the middle are rarely bothered. In home gardens, where host plants are fewer, all squashes may be attacked and multiple eggs are laid per plant, leading to the most serious damage.

The female only lives for 4 or 5 days at the beginning of summer (the male has an even shorter life span, only 3 days), but can lay up from 150 to 200 eggs during that time.

The tiny flat oval brown eggs hatch in 8 to 14 days and the white to cream-coloured, brown-headed larvae immediately burrow into the plant’s stem. Over the next 4 to 6 weeks, they feed and grow, tunneling further and further into the stem and emptying it from the inside, depositing their greenish to yellowish frass (excrements) under the entry hole. Their feeding eventually causes the leaves to wilt, then die, which is when the gardener first tends to notice the problem. At this point, it will be too late to save the plant, so it’s better to pull it out and destroy it while the larva or larvae are still inside.

If the squash plant remains in the garden, the larvae leave the stem when they reach maturity and burrow about 1 to 2 inches (2 to 5 cm) into the ground below, then pupate. They remain as pupae until the following spring, at least in northern parts of their range. In the South, after 14 to 30 days pupation, a second generation emerges that will feed over the second half of the summer, pupating in its turn in mid-fall.

It’s never easy treating an insect that spends much of its life cycle inside the host plant, especially when the host plant is an edible one you don’t want to poison by using a systemic insecticide.

If you see the hole in the stem early enough, you can try to extract the caterpillar from the stem of the plant by slitting it open carefully and removing it with tweezers, then burying the stem in the ground where it might root and recover, but that will only work if the larva is still small. If the larva is too big, the extraction job will likely kill the plant.

A similar technique involves inserting a thin wire into the entrance hole and pushing it up into the stem, thus killing the larva inside.

Probably the easiest treatment, though, is prevention.

First of all, some squash varieties seem pretty much immune to squash borer. Butternut squash and other varieties of C. moschata, like ‘Long Island Cheese’ and ‘Musqué de Provence’, for example, are considered highly resistant, so you could try planting those. Most other squashes belong to the species C. pepo or C. maxima, which are usually highly susceptible, but there are exceptions. The classic Halloween pumpkin ‘Connecticut Field’, for example, is reported to be quite resistant.

Also, since the pupae overwinter in the soil at the base of the plants attacked the previous year, always practice crop rotation. That is, never plant squash in the same spot two years in a row. That would be asking for trouble.

Covering seedlings with floating row cover (combined with crop rotation, of course) can be very effective. You’ll need to remove the translucid covering once the plant has started producing female flowers so that pollination can occur, but where there is only one generation of squash borer per year, the egg-laying females will likely already be gone by then.

Other gardeners leave the plants exposed, but wrap the base of the plant in strips of nylon stocking or aluminum foil to prevent females from laying eggs.

Or offer a trap plant or two. ‘Blue Hubbard’ squash is apparently particularly susceptible to this pest, so plant a few extra early … then pull and destroy them when you see signs of infestation.

Some gardeners report success by placing a yellow bowl filled with water out in early summer. This seems to attract the adult moths: they land in the water and drown.

Some gardeners report success by injecting Btk (Bacillus thuringiensis kuristaki), a natural bacteria pest control specific to moth larvae, into infected stems with a syringe early on during the infestation. Once the caterpillar ingests the bacteria, it quickly dies.

The squash borer is not an easy pest to deal with, but I hope the information above will help you keep it under control.

6 comments on “Dealing With Squash Borers”