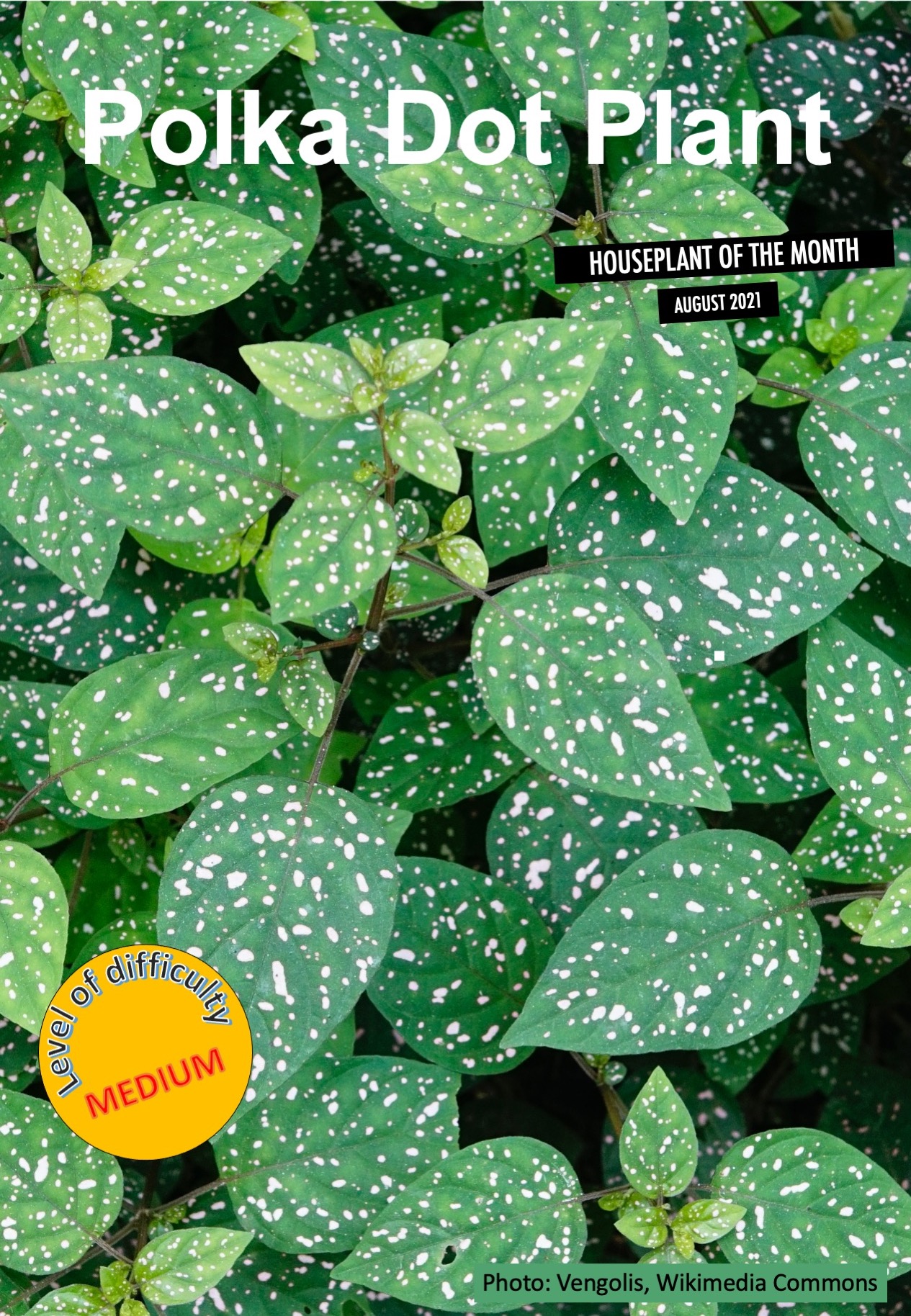 With its leaves appearing to be covered in freckles, the polka dot plant (Hypoestes phyllostachya) or hypoestes, stands out from the other houseplants. Indeed, “freckle face plant” is its other common name!

The polka dot plant is a small short-lived evergreen shrub rarely larger than 1 foot (30 cm) in height and diameter. It would be fairly insignificant if its opposite oval pointed leaves weren’t spattered with tiny pink dots as if they had been sprayed with paint. But they are! And if you turn the leaf over, you’ll discover the spots are there as well, corresponding exactly to the upper ones, but white.

The abundant speckles are thought to have a dissuasive effect on herbivorous insects and animals, making the leaves look as if they had already been partially eaten, thus encouraging the pests to look elsewhere for fodder.

The polka dot plant produces pink to purple two-lipped flowers in clusters at leaf axils and at the tip of the stem. They’re tiny and not very noticeable. Many gardeners simply clip them off when they see them.

The polka dot plant belongs to the Acanthaceae or acanthus family and is related to such plants as Justicia, Ruellia and Thunbergia and, even more obviously, to the nerve plant (Fittonia albivenis), which plays about the same ecological role in the New World as the polka dot plant does in native haunts.

The polka dot plant comes originally from Madagascar where it grows in moist, humid, tropical areas, but it has escaped from culture to naturalize in some tropical countries like Colombia, India and Australia.

It was named Hyopestes phyllostachys by the English botanist John Gilbert Baker in 1887, but don’t seek any useful terribly useful information in the botanical name. Hypoestes is from the Greek and means “under a house,” from hypo, “under” and estia “house”; referring to the calyxes being covered by bracts. The epithet phyllostachya is Latin and means “with a leaf spike.”

You’d think Baker, in naming the plant, would have mentioned something about the highly distinctive leaf spotting rather than obscure details about the flower. But in the 19th century, flower parts were considered the key to plant identification, so he was essentially foliage blind.

When I first started growing it as a child, it was known as H. sanguinolenta, which means “bloody” or “stained in blood,” a name much more appealing to a 10-year-old boy!

Back in the days, there was only the modestly spotted species with its tiny pink dots, but series like ‘Confetti’ and ‘Splash’ with larger splashes of color in a wider range of shades (white and many shades of pink and red) now dominate the market.

Caring for a Polka Dot Plant

The polka dot plant is grown both as a houseplant and as a bedding plant and container annual for outdoor use. The information given here mainly concerns growing it indoors.

Light: While this plant is considered a partial shade or shade plant outdoors, it will need more light than that indoors. It will do best in bright light with some direct sun, although some protection against the full heat of the summer sun is wise. It will tolerate moderate light indoors in the summer, but may struggle under that condition in the winter, so add artificial light if you can.

Watering: Keep the soil moderately moist at all times. Certainly, you can let it reach the point where it is “dry to the touch,” but then water thoroughly. You can let it dry out a bit more in the winter, when it is no longer growing, but don’t go too far. If the plant wilts seriously, it may never fully recover! When people “lose” their polka dot plant, it’s almost always because they let it become too dry.

Humidity: Like most thin-leaved plants, it needs humid air: 50% relative humidity at least, but 70% is better. It finds the dry air of most homes in winter difficult to support and will usually do best if kept “under glass” (in a terrarium or a sealed plastic bag) at that season.

Temperature: It’s a tropical plant and not very tolerant of cold. Try to keep it above 55˚F (13˚C) at all times for best results.

Grooming: You can remove flowers, most numerous in summer, if they bother you. Remove any yellowing or brown leaves. Don’t hesitate to prune it back harshly, especially at the beginning of the growing season (early spring), as it can become rangy over time. It responds well to pruning and will grow back quickly.

Repotting: Annually, in spring or early summer, into a light, well-aerated potting mix. However, this plant does tend to age quite quickly, so, after a year or so, you just might prefer to start a new plant from cuttings.

Multiplication: Seed of many strains is widely available and is easy to sow. Just barely cover the seeds with sowing mix. Seeds sprout and grow rapidly under warm, humid conditions. For the summer garden, seeds are typically started indoors about 10 weeks before the last frost.

Stem cuttings root readily in moist potting mix, ideally under high humidity (like under a clear plastic dome or inside a sealed transparent bag). Many people routinely start new plants from cuttings each spring, calculating that young plants give better results than older ones.

Insects and Diseases: Diseases are not usually a problem under home conditions, although they might be in very humid conditions, such as in a greenhouse. Insects, though, seem to love hypoestes. Not that they attract them from afar, but if you put your polka dot plant right next to a plant with insect problems, it’s pretty sure the pest will find it!

Spider mites, thrips, mealybugs, scale insects, aphids, whiteflies: they’re all pretty much willing to settle on the soft tissues of this plant.

Make sure you inspect plants at purchase and isolate them when you bring them home. You can use various insecticides to treat them, but this is such a fast-growing plant, it’s often easiest to destroy the infected plant and start anew with a pest-free one.

Toxicity: There is no reported toxicity for this plant, either for humans or pets. That doesn’t mean, however, that it’s edible.

The polka dot plant: the newer cultivars, especially, are amazingly attractive and can add a splash of color to your indoor décor! With such a plant, who needs flowers?

2 comments on “Polka Dot Plant: The August 2021 Houseplant of the Month”