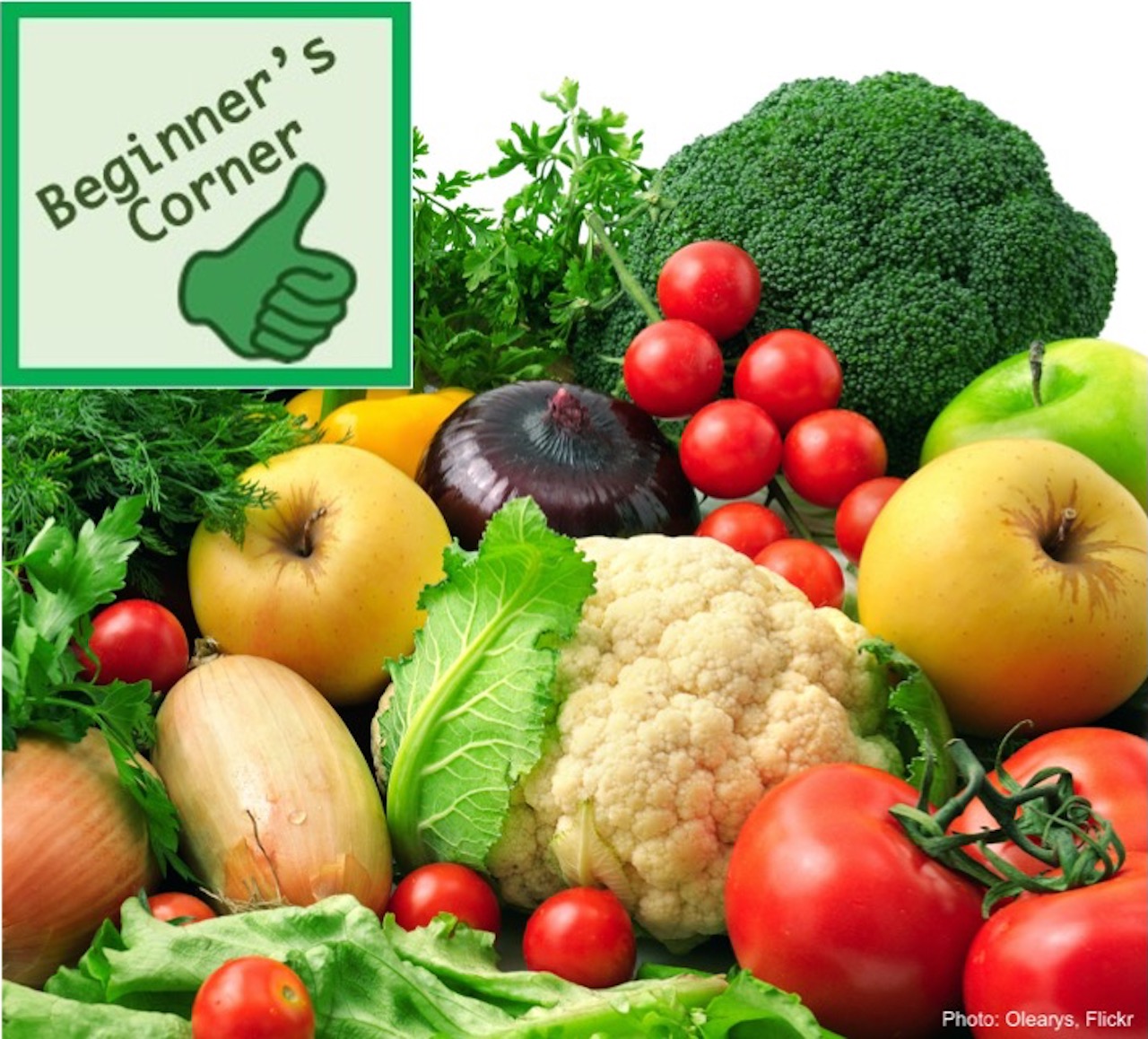 When you’re a beginning gardener growing your first vegetables, you can generally easily find information on their basic care: how to sow, transplant, water, fertilize, etc. But often, one essential detail is missing: when are you supposed to reap the fruits of your labor? Because many vegetables will go downhill and become essentially inedible if you don’t pick them at the right point … and it’s not always easy to know exactly when that is!

So, let’s be more specific. Here are 31 popular vegetables with more information on when to harvest them.

Bean: Harvest snap beans when the pods are immature, about 3 inches (7.5 cm) long, while the seeds are still small. The pod should be firm and crisp: it will “snap” when you try to bend it. If you wait too long, the pod becomes stringy and seeds turn pasty. Bush beans tend to produce their entire crop at about the same time. Pole beans are more productive, because they produce over and over until fall … as long as you harvest the pods regularly. If you let any pods mature, they’ll stop producing.

Beet (beetroot): For baby beets, after about 40 to 50 days; for mature beets, a few weeks later, when they are about 3 inches (7.5 cm) in diameter. Usually when you see the top of the root protruding from the ground, it’s ready. If you leave beets too long, they don’t become much bigger, but instead turn woody.

Broccoli: When the buds are still dense and very green. Usually, the cluster will be smaller than what you see in the supermarket. Don’t cut out the whole plant, instead harvest only the stems that are ready. That way the plant will produce a second harvest.

Brussels sprouts: When the sprouts are approximately 1½ inches (4 cm) in diameter, usually at the end of summer.

Cabbage: For summer cabbage, harvest when the head is firm and a convenient size for your needs. If you wait too long, it may split open. Don’t cut it quite to the ground: that way it will produce a second crop with smaller heads, like Brussels sprouts. However, leave the winter cabbage in place until late fall. A bit of cold weather and even some frost will improve its taste.

Carrot: From midsummer until the ground freezes. Early harvests will simply give baby carrots!

Cauliflower: As soon as heads are white and firm. Note that homegrown cauliflower heads are rarely as big as farm-grown ones.

Celery: There are different schools of thought here. Personally, I look at celery as a summer-long supplier of leafy greens and harvest the outer leaves of the rosette as I need them. (Even small leaves have great celery flavor; it isn’t just the thick petioles you can use in cooking.) The more traditional method is to harvest when the plant is dense and tall, in late summer or early fall. Celery will tolerate light frosts, but avoid severe ones.

Corn: When the silks have turned brown and the ear feels plump, it’s time. Don’t pull the guard leaves down to check, you’ll only damage the ear! The seeds’ sugar level drops rapidly once the cob is harvested, so for a particularly tasty meal, starting boiling the water before you harvest!

Cucumber: When they reach “supermarket size” … and that will vary according to the type of cucumber: slicing, gherkin, Lebanese, etc. If you leave them on the plant too long, they start to turn seedy and become bitter.

Eggplant (Aubergine): When the fruit is well formed, yet still glossy. Dull skin means it is too mature. Home garden varieties are often smaller than supermarket eggplants.

Helpful Hint: Here’s an almost foolproof tip for knowing if a vegetable is ready to harvest. Is it about the size of the same vegetable seen in the supermarket? And the same color? If so, it’s probably ready. If it still looks a bit small, or doesn’t have its final coloration, wait a little longer. However, don’t allow most vegetables to develop too much; otherwise their texture and taste will deteriorate.

Garlic: The bulb is ready to harvest in late summer, when the foliage begins to turn yellow. As for garlic scapes, harvest them when the stem forms a spiral.

Ground Cherry: When the husk starts to turn tan and papery and the fruit easily detaches from the plant, spread an old sheet under the plant, as the fruits will drop off on their own and be hard to find. It’s important to wait until the fruit has reached its final color (yellow or orange): immature fruits (green) are slightly toxic.

Jerusalem artichoke: Harvest the tuberous roots in the fall, after a few frosts. Or, early in the spring, when the ground thaws.

Kale: Harvest the outer leaves as needed throughout the summer. Harvest the entire plant for storage after a spell of cold weather, as a bit of frost improves the flavor.

Leek: In the fall, after one or two good frosts or, very early in the spring, after the ground thaws. (Many leeks overwinter well.)

Lettuce: Harvest the outer leaves as needed. Collect the whole plant when the head is well formed but not hard. When you start to see a flower stem rise from the center of the plant (when it “bolts” or “goes to seed”), it’s too late: by then, the leaves will be bitter and inedible. Usually, a plant or two in the row will start to bolt first, a sign you should harvest the others without delay. You can, however, sow lettuce again and again, every two weeks, all summer until September. So, as soon as one crop has been harvested, sow another.

Melon: When the fruit appears fully mature (color and texture will depend on the variety), it’s at or close to harvest. Wait until it turns a bit yellow and readily slips from its stalk, both signs of full maturity. The watermelon is a bit different: see below.

Onion: You can harvest onions at any time for use as green onions. For bulbs, especially if you want to store them, wait until the leaves start to turn yellow and begin to topple over. That means the onion is mature and ready for harvest. For better storage, dig up the bulbs, but leave them out to dry in the sun a few days before bringing them indoors.

Peas: Harvest sugar snap peas (eaten with the pod) when the pod is still thin and the peas are barely developed. For garden peas (where the pea alone is eaten), wait until the pods are plump but the peas inside are still tender. Once the harvest begins, you’ll need to harvest every few days.

Peppers: Harvest sweet peppers, including bell peppers, when they are firm and full size, but still green. Or wait until they mature to their final color (red, yellow, orange, purple, etc.). Mature peppers are milder in taste and easier to digest. Harvest hot peppers towards the end of summer, when the fruit reaches its final color (usually red). However, some hot peppers are traditionally harvested when they have reached their full size, but are still green (jalapeño peppers, for example).

Potato: The main harvest is ready when the foliage starts to die back, a sign the tubers are mature. However, harvest new potatoes earlier, about a week after the plant begins to bloom. Harvest only as many new potatoes as you need immediately, as they don’t store well.

Radish: Harvest spring/summer radishes about 3–6 weeks after sowing, when the root is still fairly small. Left in the ground too long, the root becomes fibrous and bitter and the plant will go to seed. You can resow radishes throughout the summer until September to ensure you’ll always have fresh radishes on hand. Winter radishes and daikons are storage radishes and slower to mature. They are harvested in the fall and can tolerate light frosts.

Rutabaga (Swede Turnip): In the fall, preferably after a frost, because the cold gives the root a sweeter flavor. Not to be confused with the turnip (see below).

Spinach: You have to harvest early, within 40 to 60 days of sowing. You can harvest the outer leaves first, but when the plant begins to grow in height, that means it is about to go to seed, so harvest without delay or it will soon no longer be edible.

Summer Squash (zucchini, patty pan, etc.): While the fruit is still young and firm with a thin skin and certainly before seeds start to form. Once summer squashes start producing, you’ll have to check the plant every other day, as they just keep coming! Don’t let the fruits get too big or their taste deteriorates. In the case of zucchini, for example, ideally you’d harvest it before it reaches 10 inches (25 cm) in length. With summer squashes, the more you harvest, the more the plant produces!

Swiss chard: Harvest the outer leaves as needed throughout the summer, leaving those in the center intact: that way the plant will continue to produce until frost. The leaves are edible at any stage, whether small or super-sized!

Tomato: Ideally, when the fruit has reached its final color (red, orange, yellow, purple, etc.) and is a bit soft when you press it. Determinate tomatoes are the earliest, but tend to all ripen at the same time. Indeterminate tomatoes (the taller ones) produce all summer, almost until frost. When frost threatens, collect the remaining fruit: those that have started to change color can still ripen; just put them in a dark pantry. Those that are still fully green can used in recipes calling for green tomatoes (ketchup, fried green tomatoes, etc.).

Turnip: Harvest when the root is about the size seen in the supermarket, that is about 2 to 2 ½ inches (5 to 6 cm) in diameter. If left too long, the root will grow in size: it remains edible, but becomes woodier and less palatable.

Watermelon: This fruit is always a bit difficult to assess. When the tendril closest to the fruit turns brown and the fruit sounds hollow when you thump it, there’s a good chance you have it just right!

Winter squash (pumpkin, butternut squash, spaghetti squash, etc.): When the fruit is fully mature, which the fruit often signals by changing color. If not, check the stalk: it will dry and softens as the fruit matures. The winter squash fruits can support light frost.

May you enjoy bountiful harvests from this year’s vegetable garden!

6 comments on “When Are My Veggies Ready to Harvest?”