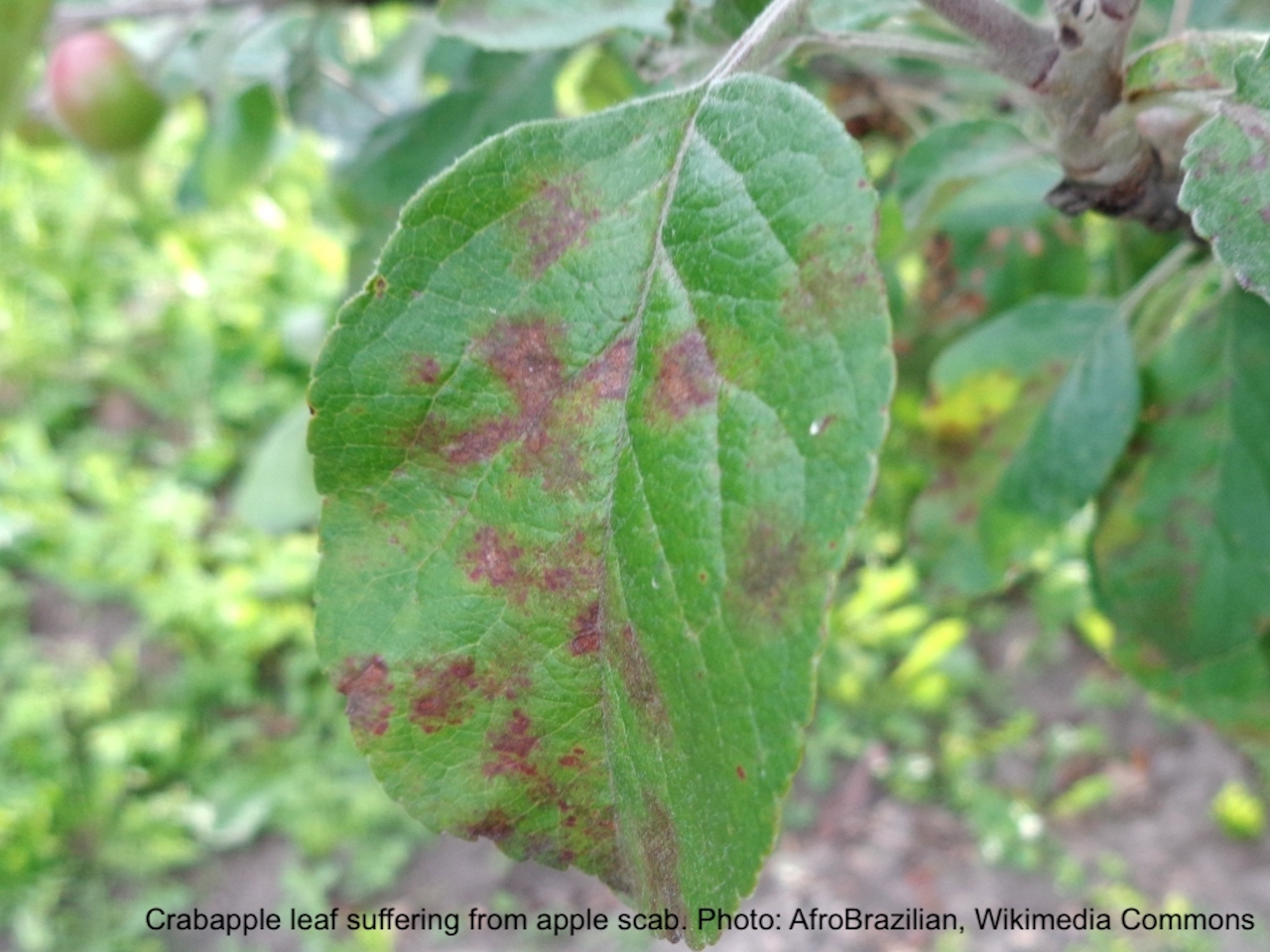 Question: I have a crabapple tree in front of my house that has come down with the same disease for the third summer in a row: I’ve been calling it “black spot.” It flowered well this spring, but the disease started up again two weeks ago: black spots appear on the leaves, get larger, then the leaves turn yellow and drop off. Last year it had practically no leaves on it for the second half of the summer!

I received all kinds of treatment advice, so I sprayed it with lime sulfur, then a copper product … but nothing seems to work. Maybe I didn’t do it diligently enough? Besides, since the tree is so tall (taller than my two-story house), it’s impossible to spray the whole thing and I assume that isn’t helping.

What do you recommend that I do about this? Also, in the long term, can the tree die?

Answer: It’s not black spot (in the gardening world, that name is usually restricted to rose black spot [Diplocarpon rosae], which is, as the name implies, strictly a rose disease). I’m pretty sure your crabapple is suffering from apple scab (Venturia inaequalis), a disease very common in both crabapples and apples (both are Malus spp.), as well as pears and other fruit trees.

In apple scab, velvety olive spots appear on the leaves and the spots later turn black. In a bad year, the green parts of badly affected leaves turn yellow and fall off prematurely.

As for the fruits, either they fall when still young or scablike brown corky patches form on them as they mature. (Note that affected fruit is still edible: just remove the lesions.)

True enough, fungicide treatments are possible, but they have to be applied regularly, usually weekly from spring to late June, or after every rainfall, but even through the summer in some years. That can mean between 3 and 11 times a year! Orchard growers generally do this assiduously, but spraying is not so practical in a typical home garden. For one thing, as you point out, spraying a tree of good size is no easy task. Plus, you use your yard for other things (relaxing, dining, gardening, etc.) that spraying will certainly interfere with. Do you really want fungicide spray to be landing in your kids’ pool or on your picnic table?

As a laidback gardener, I prefer to suggest benign neglect. Yes, do rake up the leaves and fruits whenever they fall (yes, you can put them in the compost), as they’re the major source of future infestations, but that’s quite enough effort, from my point of view.

You can do that because, even without treatment, crabapples with this disease can still live for decades and generally manage to bloom spectacularly most years. So, the tree may look a bit bare in summer (during a bad year, because there are good ones during which few symptoms will be noticeable), but it will still likely be “presentable.” That is, you may notice the problem, but most guests won’t.

Of course, for readers of this blog who are growing apple trees (i.e., for their fruit) rather than crabapples (for their appearance), a bit more attention might be necessary. Maybe a spring spraying or two of an organic fungicide. But even if you do nothing (other than rake up and compost fallen leaves and fruits), your trees will still have good years, average years and, sorry, but yes, bad ones.

When the tree dies (yes, scab can potentially be fatal after many years of infestation), consider replacing the diseased tree with a variety that is not prone to apple scab.

It’s unfortunate that many crabapple trees very prone to scab are still commonly sold in nurseries, even though their susceptibility to the disease has been known for over 40 years. I mean, why are nurseries even producing such flawed plants? What kind of service is that to their clients?

Among the crabapple trees to avoid planting are ‘Brandywine’, ‘Hopa’ (the worst in my neck of the woods) ‘Indian Magic’, ‘Indian Summer’, ‘Profusion’ and ‘Radiant’. Among the varieties that do offer good resistance to scab are ‘Lollipop’, ‘Prairifire’, ‘Sugar Tyme’, ‘Snowdrift’ and ‘Thunderchild’. There’s a list of disease-resistant crabapples in the article 50 Disease-Resistant Crabapples.

Among apple trees, too, there are varieties very susceptible to scab (especially ‘Cortland’, ‘Empire’, ‘Gala’ and ‘McIntosh’) and ones that are quite to highly resistant, such as ‘Liberty’, ‘NovaMac’ and ‘Priscilla’. You’ll find a more complete list of apple trees resistant to most common apple diseases, including scab, in the article No Spray Apples.

So, probably the best solution to apple scab disease is to learn to tolerate it … and when you decide to plant new crabapples or apples, always look for resistant varieties.