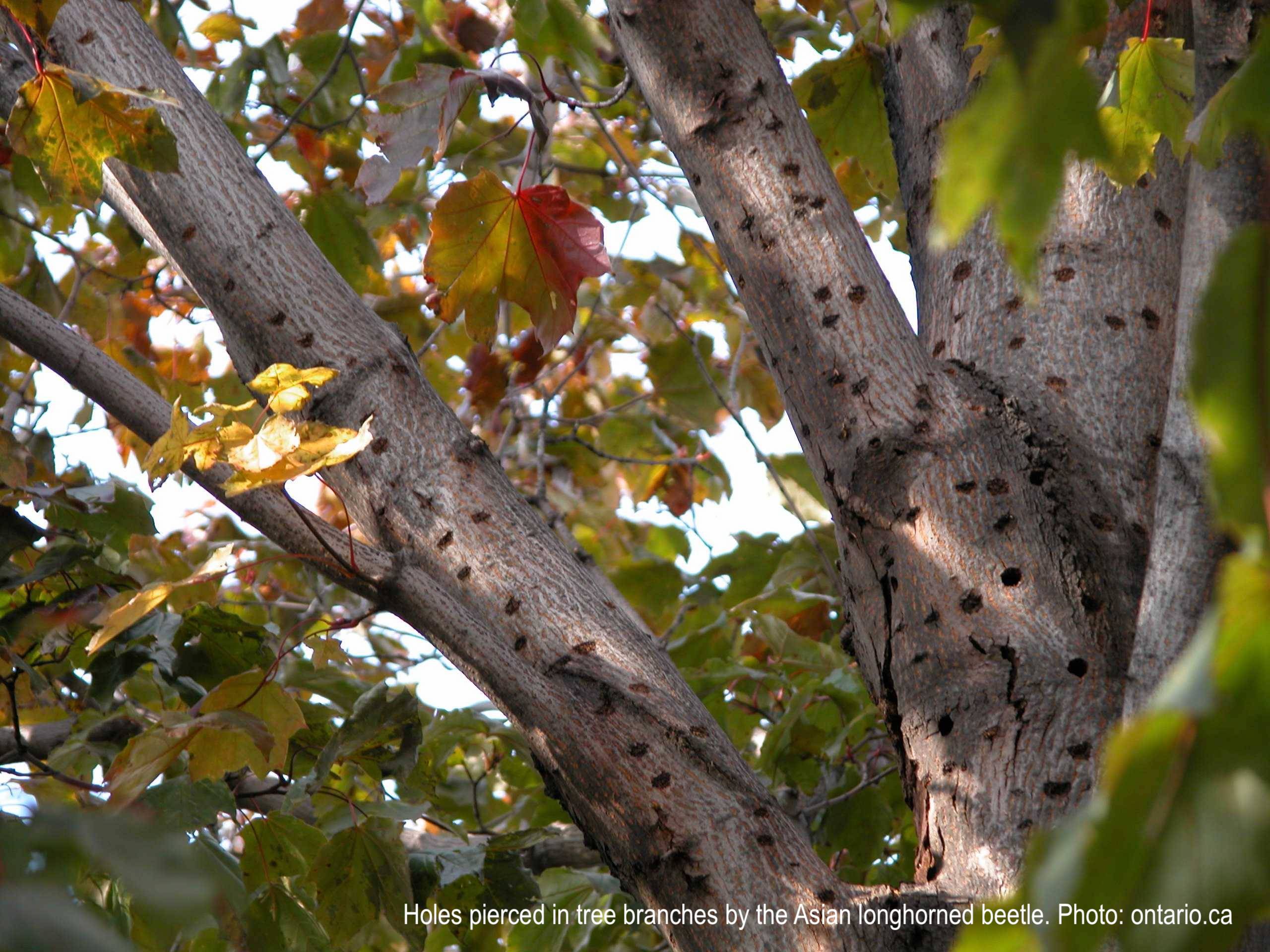 The following article was derived from a press release by the Canadian Food Inspection Agency and specifically concerns tree pest concerns in Canada. However, while specifics may vary, I find it could also be useful to gardeners and homeowners in the United States or Europe, as inspecting your trees for insect damage in August is an excellent idea throughout the Northern Hemisphere.

It is peak season for adult wood-boring insects to be spotted outside of trees, and their impacts are most obvious in the summer. Invasive pests like the emerald ash borer, gypsy moth (Lymantria dispar dispar) and hemlock woolly adelgid are serious threats to Canada’s economy, environment and society. This August, the Canadian Food Inspection Agency (CFIA) encourages everyone in Canada to take an active role in protecting Canada’s plants by joining plant health enthusiasts from coast to coast to coast who will be participating in Tree Check Month.

It only takes a few minutes to check, so please take a quick trip outside to inspect the trees in your yard or in and around your community. Start by looking at the whole tree, then focus on specific areas. Look for unusual or sudden changes in tree health, including leaf discolouration, bark cracks, insect holes and tunnels under bark that has come off. Start your inspection at the roots, move up the trunk and along the branches, looking for noticeable insect populations and evidence of feeding activity on the leaves.

Everyone in Canada is encouraged to share photos of invasive species on social media using the hashtag #TreeCheckMonth. Contact the CFIA with any suspicious finds for your area, especially if you see the spotted lanternfly for example—an insect that we want to keep out of Canada. The sooner the CFIA receives a report that a new pest has been found or a known pest is in a new area, the quicker CFIA scientists can investigate the source and prevent further spread.

By becoming familiar with pests in your community and by participating in Canada’s Plant Health Hero Challenge, you can help spread the word about Tree Check Month and the importance of plant protection. Use the hashtag #TreeCheckMonth when reporting your actions and in your conversations on social media. Although the International Year of Plant Health has just ended, vigilance is still key, and everyone in Canada can play an important role in keeping our plants and trees healthy to lay the foundation for a better future.

“By taking action this Tree Check Month, you’ll help keep our beautiful landscapes free from invasive species. Together, we can protect Canada’s plant resource base while supporting continued economic growth.”

—The Honourable Marie-Claude Bibeau, Minister of Agriculture and Agri-Food

“Let’s all get involved in Tree Check Month this August. When we make discoveries in our own backyards and report them, we are contributing to community science. The early detection and reporting of pests in Canada allows the CFIA to act fast to protect our health and well-being.”

Canada’s Plant Health Hero Challenge is a social media campaign aimed at increasing awareness about the importance of plant health in Canada, by inspiring people to participate in certain plant health activities and report their actions via social media using the hashtag #CDNPlantHero.

Some of the CFIA’s pests of concern include the following:

Don’t Move Firewood. One of the most common ways pests travel to new locations is by hitching a ride in firewood. A best practice is to always buy firewood where you’ll burn it or purchase heat-treated or kiln-dried firewood to be sure that no invasive insects are hiding inside.

The CFIA (Canadian Food Inspection Agency) is the National Plant Protection Organization for Canada and is responsible for setting and implementing plant-health regulations, policies and programs that are consistent with international standards and trade rules.