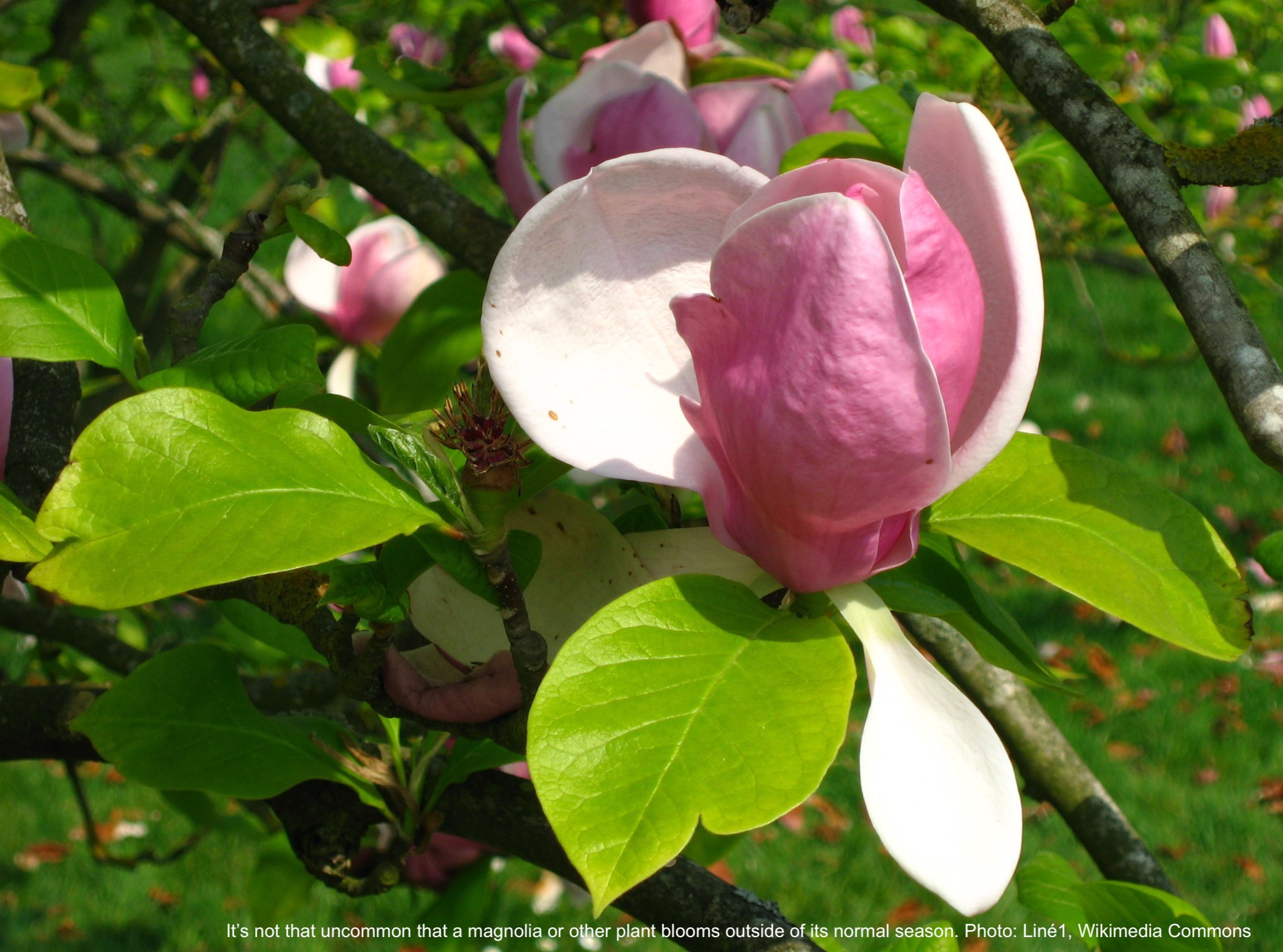 Question: My magnolia is blooming again in the middle of summer! There must be at least twenty new flowers. Is this something I should be worried about?

It’s not all that unusual to see a plant, notably a spring-flowering tree or shrub, blooming outside of its normal season. You’ll sometimes see a magnolia, azalea, lilac or fruit tree, among others, flowering modestly in summer or autumn. Usually, there’ll only be a few flowers, or possibly one branch or two will bear blooms.

Quite often this surprising secondary blooming season appears to be stimulated by abnormal weather conditions: an extra-dry early summer followed by a cool rainy period may seem like spring to some plants. And indeed, almost any kind of stress seems to occasionally provoke off-season bloom. However, there are many cases where there is no clear cause: the plant just “decided” to risk a few extra-early blossoms and no one knows why.

Indeed, this sort of trait is avidly sought after by hybridizers. Crossing plants that tend to have a regular second bloom and then selecting for an even better performance among the seedlings thus produced is one way used to develop a trustworthy reblooming or “remontant” variety.

If you think back, roses originally bloomed only once a year, in early summer, but most modern roses now rebloom and indeed, some are practically everblooming. This is so common we now think of it as quite normal, but it’s the result of over 200 years of careful hybridization.

Other types of plants where there are now trustworthy reblooming varieties thanks to attentive hybridizing include azaleas, rhododendrons, lilacs, strawberries, bigleaf hydrangeas, German iris and clematis. Indeed, most modern garden annuals now flower all summer … but the plants our grandparents grew didn’t. The ability to rebloom has been bred into them.

And there’ll be plenty more reblooming plants to come: remontancy (that ability of a plant to flower more than once during the course of a growing season) is a highly sought-after trait in hybridization.

Your magnolia’s off-season bloom is not harmful to it per se, but most of the time trees and shrubs that bloom a second time in late summer or fall do so from buds produced in early summer: they won’t have time to produce new set of flower buds that year. That means there will be that many fewer flowers to open next spring and that will somewhat lessen the impact of next year’s flowering. However, I don’t think 20 fewer flowers on your magnolia will be much noticed, as a typical spring-blooming magnolia produces hundreds of flowers.

By the way, no good comes from scrambling to remove off-season buds before they open: once off-season flowering has been initiated, no new flower buds will replace them that year anyway. Rather, I suggest you just sit back and enjoy the show!