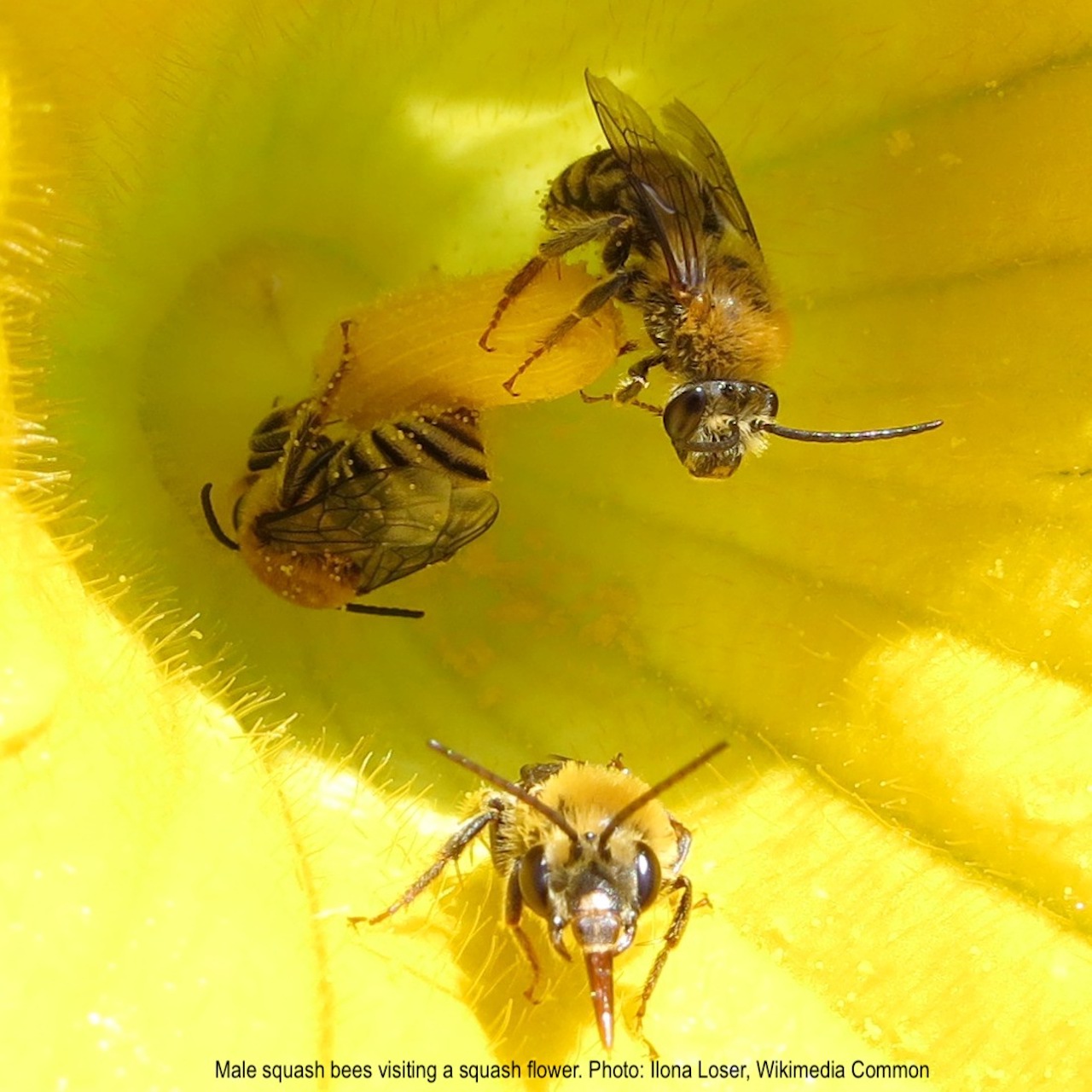 Comment: I just saved the lives of three bees that were trapped inside a female squash flower that had closed over them. I discovered them when I opened the flower to fertilize it with a male flower.

Reply: Actually, you probably disturbed the sleep of some very tired squash bees!

Unlike honeybees, squash bees are solitary and have no hive to return to at night. As a result, male squash bees, as well as unmated females, spend the night in squash flowers whose petals wilt over them and give them protection from predators, then push their way free in the morning. (Fertilized females spend their nights in the tunnels they dig for egg laying.) If you delicately hold a wilted squash flower between your fingers in late afternoon or evening, you can often feel or hear a bee or two buzzing about inside.

Don’t worry! There’s no danger of your being stung: squash bees are stingless!

Squash Bees: The Most Useful Bee You’ve Never Heard About!

There are actually two genera of these highly specialized bees, Xenoglossa spp. and Peponapis spp., for a total of about 20 species. The eastern squash bee or hoary squash bee (Peponapis pruinosa), the one used as an example in the rest of this article, is, however, by far the most widely distributed species, having migrated north from its original home in Mexico as far as Canada, following their one and only food source as native peoples then modern farmers adapted squash culture to colder climates over the centuries.

Squash bees may look vaguely like honeybees (they’re about the same size and are of a similar coloration), but they don’t have the honeybee’s yellow pollen basket on their back legs. Instead, the female bee has very hairy back legs that do the job.

Both males and females spend time in and around squash flowers, even mating there, from early in the morning until shortly after noon. The males and virgin females then take a nap in the last flower they visited, which closes up around them as it fades (squash flowers last less than a day), while the fecundated females fly off to the nest they’re building or have built, usually right nearby, often at the base of the squash plant. It’s a tunnel in the ground with a single pencil-sized entrance and is from to 5 inches to 1 ½ feet (12 to 45 cm) deep, with 4 or 5 lateral tunnels in which she lays her eggs, then deposits pollen and nectar to feed her larvae. Although the bees are solitary (females don’t share nests), they aren’t territorial and so there may be several nests in close proximity.

The larvae pupate in the soil and remain there until the following summer. They are therefore highly vulnerable to many soil-disturbing gardening practices, such as hoeing and tilling. No-till methods, or only very shallow tilling to no more than 4 inches (10 cm), will help preserve them. Likewise, if you want to help maintain squash bees, avoid the excessive use of insecticides, especially neonicotinoids.

The new generation appears in early summer (July in northern areas) and the cycle begins again.

5 comments on “Bees Trapped in a Squash Flower”