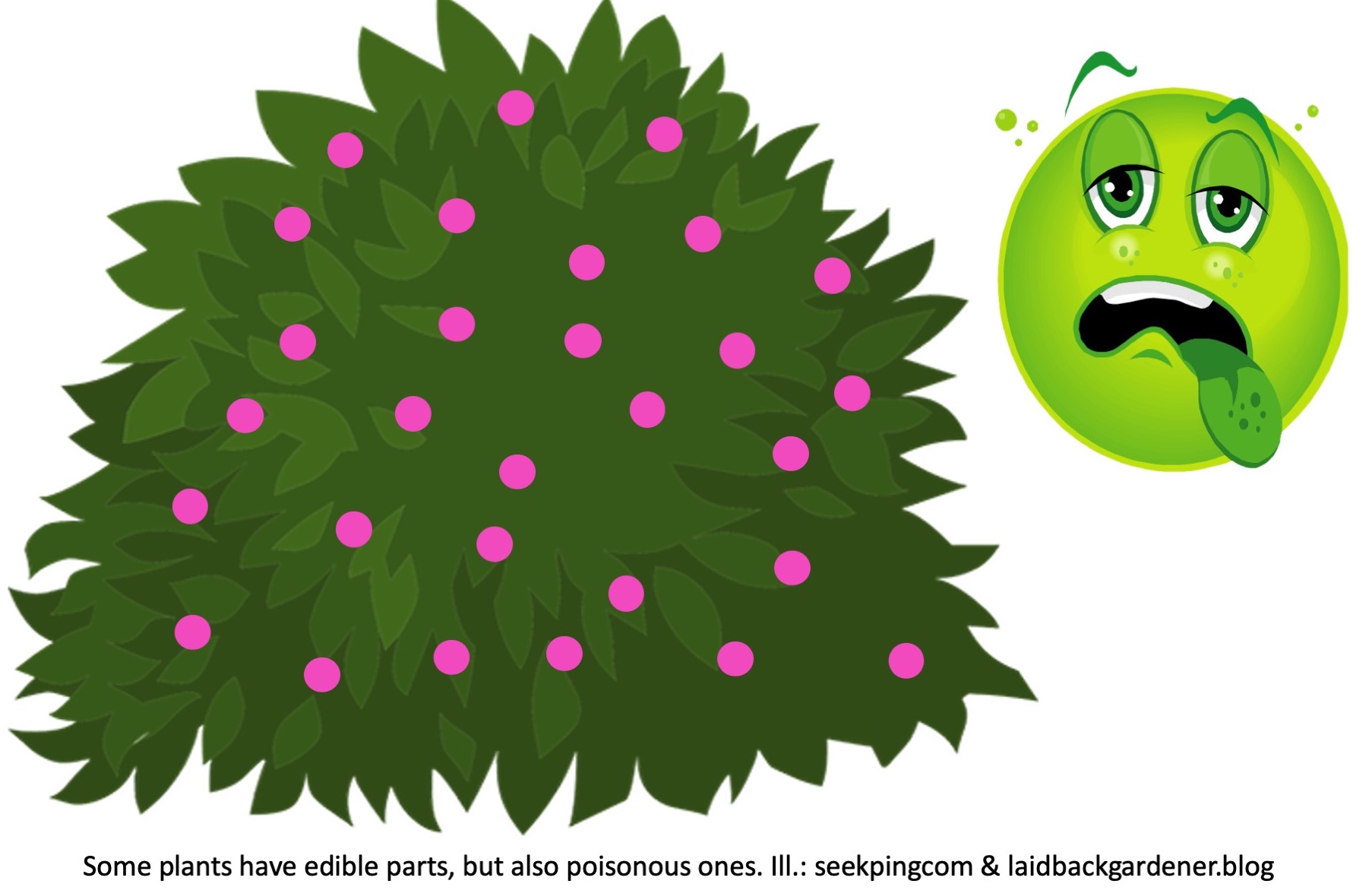 It may seem strange to think that a plant can be both edible and toxic and yet that is in fact a common situation.

For example, many plants produce edible fruit to attract the birds and mammals that will help distribute the seeds found inside, yet don’t want those same animals to consume their leaves and stems, so have evolved ways of infusing their other parts with deterrents, including toxic elements. Also, often the flesh of the fruit will be edible, but the seed or nut toxic, thus ensuring that the “carrier” doesn’t eat it.

And other “edible” plants can only be consumed if they are properly prepared.

In fact, many of the most popular edible plants can also be toxic under certain circumstances.

Here are a few common “edible but toxic plants.”

Note that, unless otherwise specified, the toxicity of the plants mentioned here is relatively weak. Eating the wrong part or eating it without proper preparation will probably simply cause intestinal discomfort or maybe nausea, but will rarely require medical treatment.

And yes, in case you wondered, all the plants described here are also toxic to pets.

Almond trees are poisonous from top to bottom. Even the shell surrounding the edible kernel is poisonous!

The almond commonly found on the market in North America and most parts of Europe is the sweet almond (P. dulcis dulcis), so called because the poisonous properties have been bred out of it, and it can be eaten without concern. However, wild almond trees (P. dulcis amara) produce a kernel that is called “bitter almond” because of its bitter taste. Bitter almonds contain amygdalin, a product that converts to cyanide inside the body and even a few raw kernels can kill a child. They have to be cooked before they can be used safely.

In spite of their bitterness, bitter almonds are considered much more flavorful than sweet almonds and are favored by many chefs. They are popular and widely available in the Middle East and in North Africa, plus, on a lesser scale, in Europe. The sale of bitter almonds is prohibited in North America … but that doesn’t prevent certain merchants (and chefs!) from sneaking them across international borders.

Apple pips (seeds) contain cyanide, or rather amygdalin, which the body converts into cyanide. Accidentally swallowing a few apple seeds is not a problem: they’ll pass through your digestive system intact. However if you munch the seeds before swallowing them, which will release the amygdalin, that could theoretically send you to the hospital, although you’d have to eat a lot of them. The leaves and stems of apple trees are poisonous too.

Crabapples, by the way, have the same poisonous properties as full-size apples.

Don’t let dogs or cats eat apples, because sometimes they crush the seeds as they eat. Even so, they’d have to eat a lot to be poisoned. Birds, rabbits, guinea pigs and other small pets, though, really are at risk from apples: always core the fruit before you serve it to them.

You can munch away on the spring shoots without concern, but the red berries produced by female plants are slightly toxic.

No, gardeners in temperate climates will not find cashew trees in their garden: it is a strictly tropical tree. Even in Florida, it can only be grown in the extreme south end of the peninsula. However, you might well see them when you travel, so be aware that the nut (which, curiously, grows outside fruit) is highly poisonous unless properly treated. It must be extracted from its shell and roasted to destroy the toxins. Curiously, the fruit itself, the “cashew apple,” is edible and can be consumed without cooking. It is commonly eaten in many tropical countries.

Very popular in tropical countries around the world, cassava tubers (also called manioc) are a staple food that is consumed in much the same way as potatoes. In the North, the best-known form of cassava is tapioca, typically used in making pudding. It is prepared from cassava flour. And you can find imported cassava tubers in many northern fruit markets as well.

However, the cassava tuber is actually highly toxic if not properly prepared, and can even be fatal, as it contains a whole host of toxins, notably various chemicals that are transformed into cyanide by the human body.

Imported cassava tubers are “sweet”: the poisonous properties found in wild tubers (linamarin and other products) have been largely bred out of them. Still, they do remain poisonous until they are properly prepared, which can be done by peeling them (the poisons are concentrated in the outer skin) then boiling, baking or fermenting the tuber or pounding it into flour.

Bitter cassava, closer to the wild form, is nevertheless still consumed in many countries, often as a starvation food. It needs to be boiled repeatedly to remove its toxic properties.

Variegated tapioca (Manihot esculenta ‘Variegata’) is sometimes cultivated as an ornamental patio plant in northern regions. If so, be aware that it is toxic in all its parts.

Maybe your grandma used to make delicious elderberry wine, but she did so from cooked berries. All parts of the elderberry plant except the flowers and the ripe berries are poisonous. In fact, although the ripe berries can be eaten, ideally you should do so without swallowing the seeds, which will release some toxic elements if broken open. That’s why, in general, it’s best to cook the berries before use, because that will destroy the toxins in the seeds.

By the way, other species of elderberry, notably the red elderberry (Sambucus racemosa) are even more toxic than black elder (S. nigra) and most authorities consider them poisonous period. In truth, though, the berries can theoretically be eaten if they are cooked.

The mature seeds of most beans are somewhat toxic if eaten raw, but kidney beans contain far more phytohemagglutinin, the toxic element, than other types of beans. They must be soaked for several hours, usually overnight, in order to soften them, then boiled for a minimum of 10 minutes so the toxin drops to an acceptable and safe level. Sometimes accidents occur, though, when someone eats beans that were soaked but not yet cooked. As little as five raw beans can send an adult to the hospital.

The flesh of various Prunus species (plums, cherries, peaches, etc.) is edible, but the leaves, stems and pits are toxic, containing a precursor of cyanide.

Only the tuber is edible: the roots, leaves, stems, flowers and especially berries are toxic. Occasionally people are poisoned by mistaking potato berries for green tomatoes. Even green parts of the tuber (and a tuber exposed to the sun will turn green) are toxic. You can, however, eat a tuber that is partly green if you cut away the green section.

Only the leaf petiole is edible. The leaf blade is too rich in oxalic acid, toxic to humans if consumed in large quantities.

Although it’s often claimed that all parts of the tomato plant are poisonous except the ripe fruit, in fact, tomato plants are only slightly toxic. Yes, the green parts contain toxic elements like tomatine, solanine and other alkaloids, but not in quantities important enough to make you sick under normal circumstances. So, while you could say that green tomatoes, for example, are slightly toxic, you’d have to eat over a pound (500 g) of them before you felt ill, so it’s perfectly safe to use them in relishes, chutneys and fried green tomatoes … as long as you don’t pig out!

There are many other examples of plants, not to mention mushrooms, with both toxic parts and edible parts. The important thing is to not presume that if one part of a plant is edible, the rest must be too, or that a plant usually served cooked is also edible raw. Or that a plant grown in a vegetable garden is necessarily safe to eat! Getting that wrong could send you to the hospital!

1 comment on “Plants That Are Both Edible and Poisonous”